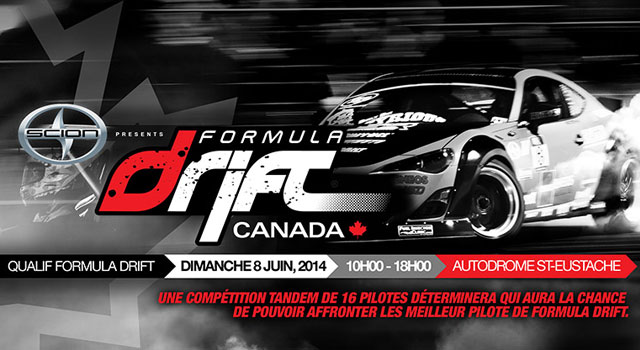 “As exclusive host to the inaugural Formula DRIFT Invitational Competition to take place in Canada, we continue to show our commitment to the evolution of the sport of drifting in this country. Competitors, fans, and sponsors from across Canada and the USA will have the opportunity to be a part of history and enjoy the excitement of world class professional drifting.” The Formula DRIFT Challenge will be held on August 31 – September 1 at the same venue. For the first time ever Formula DRIFT drivers will be stepping foot on Canadian soil to compete in a top 16 competition against the best Canadian drifters. Tickets will start at $20 for on-site Sunday entry, while Monday’s on-site price will be $35. Tickets for both days will be $50 at the gate and $40 online for the weekend pass. The event will feature a vendor village, skateboard demo, and Offset Kings car show.

“To be able to bring Formula DRIFT to the Autodrome St-Eustache, Québec’s most popular motorsports venue, during their 50th anniversary is a great milestone for us,” said Jim Liaw, president and co-founder of Formula DRIFT. “Canada has a great drifting culture and to be able to help grow the sport in this region is a major accomplishment.”