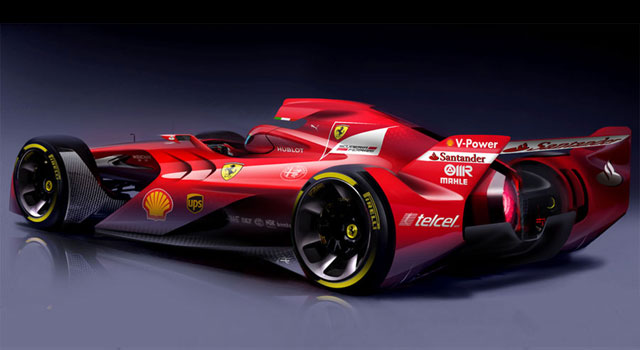 Ferrari has released images of what it envisions a future Formula 1 race car could look like if it wasn’t hampered by pesky regulations.

The renderings were developed by Ferrari’s in-house design department and launched on its micro-website.

“Our challenge was to create something that was – to put it short – better looking,” Ferrari said in a statement. “We value your comments on that.”

Ferrari team principal Maurizio Arrivabene has been pushing for a change in Formula 1 regulations:

“By 2017, I too would like to see cars that win over the fans, with cars that they can get closer to and that are aesthetically more appealing, maybe even producing a noise that gets your hair standing on end, like that produced by a heavy metal band,” Arrivabene says. “That was what it was like back in the day when Niki [Lauda] was racing and I was an enthusiastic fan, clutching my general admission ticket. However, I don’t think a simple evolution is enough in this case.”

“Instead, a real revolution is called for, with significant and radical changes. By that I mean more power, higher speeds, not necessarily involving the use of more fuel, but definitely applying a cost reduction to those components that are of little interest to the general public.”