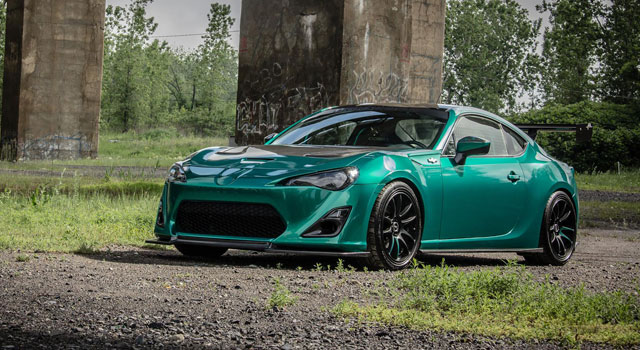 This 2013 FR-S may not even have 30 000 kilometres on the clock, but it’s seen its fair share of abuse over the course of it’s short life. This car was at first purpose built for almost exclusive track use, being the star of a local TV show « Équipé pour rouler ». Extensive suspension, brake, tuning and aerodynamics work was done as soon as the car rolled out of the dealership floor. Lachute Performance worked their magic with all the upgrades. RTX Wheels also partnered for the project on day 1.After a year of track use, the car was bought by Francis from RTX Wheels, a long time Scion lover, whose plan was to continue the project as a track-worthy car, but also a show-worthy work of art.First order of business was the overhaul of the exterior of the FR-S. Teaming up with Cavin Works, a local wrap shop, the car received a new green dress along with subtle touches to the front and rear lights as well as the Cusco cage.The car then went back to Lachute Performance for even more mechanical work, in the form of their headers for the boxer engine and a re-mapped tune.The car now sits in its final 2015 version. With a busy show schedule all summer, the car is taking on almost full time its representative duties for RTX Wheels. Francis is also a member of High Society Mtl.Stay tuned for a new feature in 2016, we’re hearing rumors of the car getting wider and even louder.