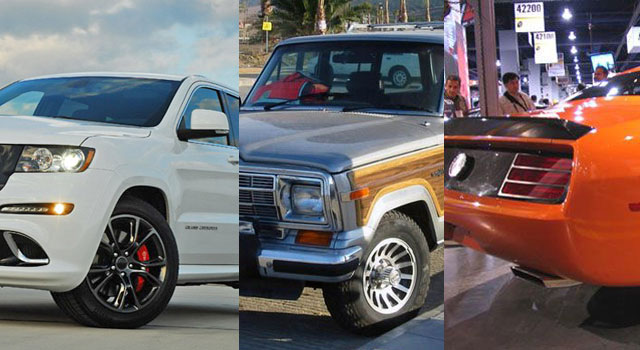 Chrysler recently held it’s dealer-only show in Las Vegas. Everyone attending had their phones confiscated so as to prevent any leaked photos. So far, it looks as if they did a good job at hiding everything however here is a written summary from one attendee:

New Dodge ram pics were neat, some of the new packages are nice too. The NEW Power Wagon.. holy ****… awesome looking and was on 37’s. 37’s won’t be on the production version, but it’ll have 35’s. Looks like the Ram Rebel on steroids.

The Dodge ‘Cuda looked good, they had one made in a convertible. Not sure that one will see production, but lighter and smaller than Challenger. (7/8 scale)
(en theorie il est sur le meme chassis que la nouvelle Alfa Romeo Giulia)

New Challenger ADR (American Drag Racer) release was crazy with 315’s on all 4 corners. Rumors of 1000hp?? The unveiling had it coming out of a cage. Ha!

They have an SRT Durango in B5 Blue!!

One of the biggest surprises was the NEW CHARGER. Looks like the 99 concept… but so much better. I can’t wait until that hits.
(la nouvelle generation de grosse RWD Chrysler sera concue sur la meme base que les nouvelles Maseratis)
Other notables were the 4500 promaster concept, some Alpha Romeos, which were impressive and Fiats like the 124 Spider and an SUV. Maseratti has some hot cars too.
(la 124 spider est la soeur de la nouvelle Miata, elle va sortir de la meme chaine de montage avec une motorisation italienne et une carrosserie differente)

Biggest surprise at the end though was seeing the new 2017 Wrangler. Not a big departure from the JK, but I’d say it shares nothing with the JK.