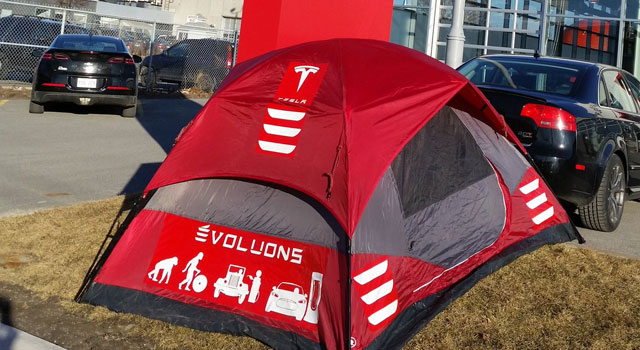 The long awaited unveil of the Tesla Model 3 is nearly here and people have started lining up outside the Montreal store of the California-based electric car manufacturer.

The launch is scheduled for Thursday and people will be able place order as of that date. It’s been estimated that the company will take about 100,000 reservations for the Model 3 in the first 24 hours which is incredible since nobody outside the company knows exactly how much it will cost. Tesla CEO Elon Musk has stated it will be “around $35,000 US” but that is as specific as it gets. Canadian buyers should expect to pay at least $45,000 for the vehicle capable of doing about 330 kilometers on a charge.

The Model 3 is Tesla’s first model that won’t be priced out of the majority of people’s budgets. The Model S sedan and the recently launched Model X SUV are both very expensive with both costing over $100,000 in Canada before incentives. Even used examples of the base Model S with over 50,000 km are going for about $80,000.

Ian Pavelko is the first person to have lined up outside the Montreal store and cannot wait to order his Model 3. Tesla is charging $1000 for reservations and Ian shouldn’t expect his Model 3 until late 2017 or early 2018.

He tweeted out photos of his chair and badass custom-stickered tent late this afternoon:

The Model 3 has the potential to up-end the industry according to many analysts so it’ll be interesting to see if Tesla can stick to the expected starting price and production timelines.