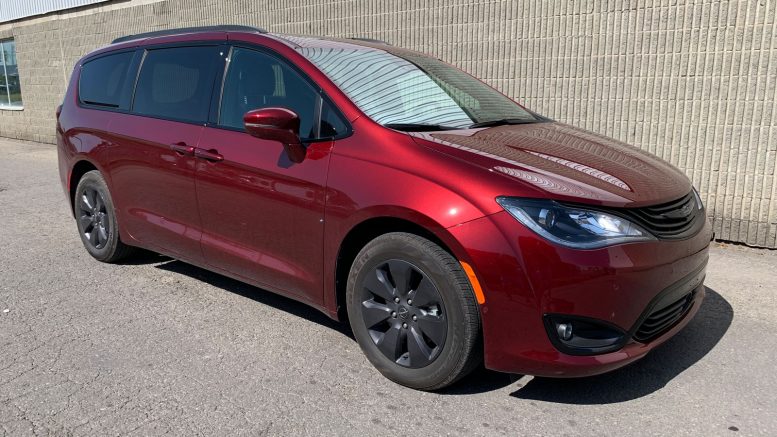 Minivans are perhaps one of the better subjects for electrification. Young families with kids often have to make a myriad of short trips back and forth to and from daycare, school, work, the soccer field and the grocery store. As someone who falls into this category, I can attest to this.

The Chrysler Pacifica Minivan went on sale in 2016 and the plug-in hybrid went on sale in 2017. The Pacifica name may sound familiar because it was once a crossover Chrysler sold between 2004 and 2008. You may also be familiar with the Dodge Caravan – the vehicle FCA (Chrysler and Dodge’s parent company) intended for the Pacifica to replace. As of this writing you can still buy a 2019 Caravan. The vehicle is such a great seller that it forced FCA’s hand to keep it on the market a few more years. People want inexpensive minivans and the Caravan does an amazing job at filling this role. It’s my sincere hope that they find a way to keep the Caravan going but it’s likely coming to an end. The fact that the company wants the Dodge nameplate to be only for performance cars also doesn’t do much to help the Caravan’s chances. To be honest I’ve never met anyone who was offended that their sports car shared a name with a minivan.

FCA recently introduced the Chrysler Voyager which is an inexpensive alternative to the Pacifica but is basically still a Pacifica. It’s not for sure yet what we’ll get in Canada but what will likely happen is that the two lower trim levels will be Voyagers and the higher ones will remain Pacificas for 2021 model year. 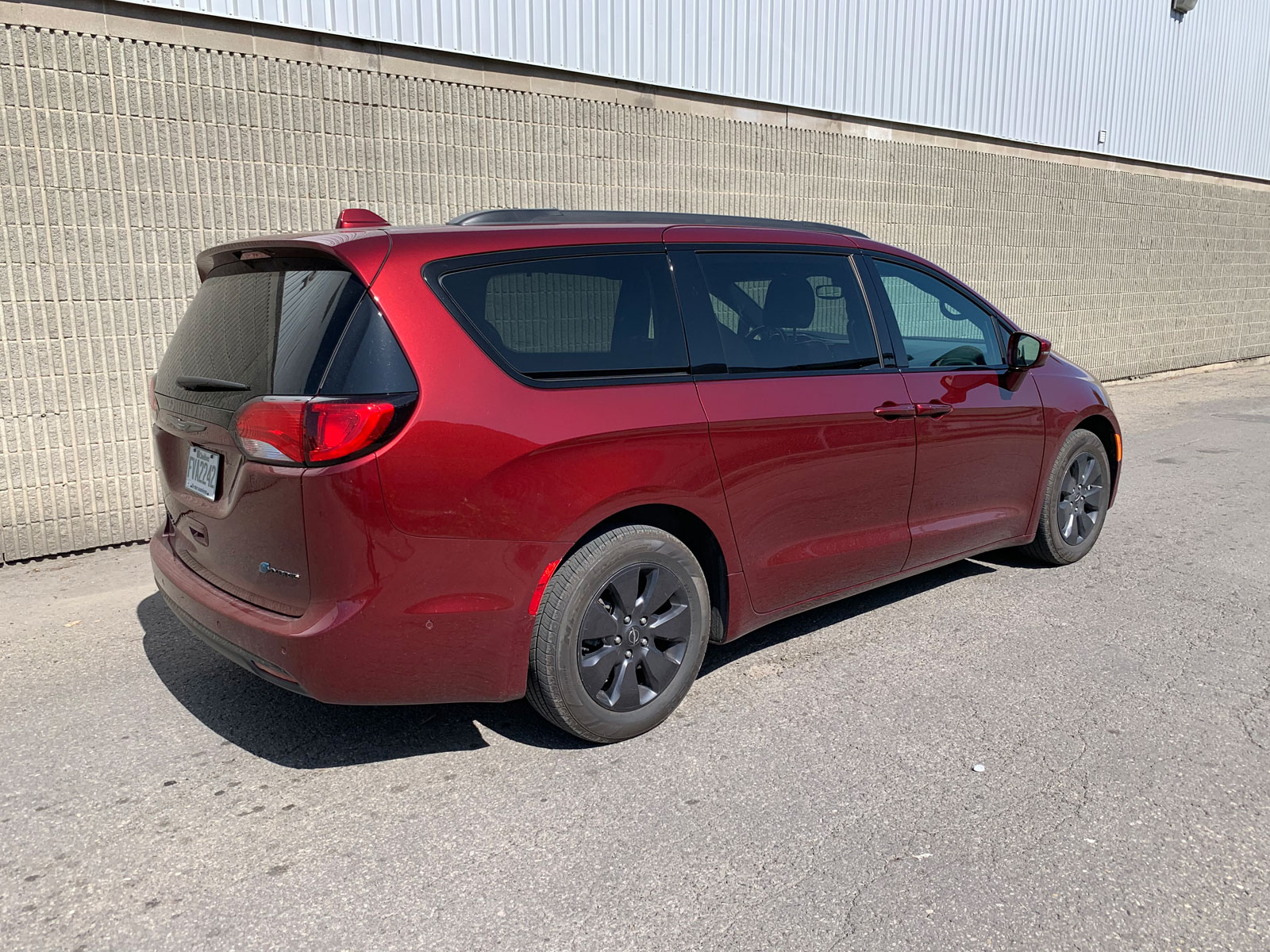 The test subject here is a 2019 Pacifica Hybrid Limited. It’s the top-of-the-line model with all the bells and whistles. Chrysler’s current design language translates quite well for a minivan with sculpted lines and an attractive silhouette. With its long wheelbase, wide track, low stance and the optional 20-inch wheels, the Pacifica has a sporty aura – as much as is possible for a minivan. To smooth things out even further, the Pacifica’s sliding door track lines are hidden under the rear-quarter side glass, making them almost invisible.  The minivan has always been the automotive designer’s biggest challenge. How does one make a box on wheels sexy? Well Chrysler has come about as close as you can with this one.

Compared to the Caravan I used to own, the Pacifica is miles ahead of it in every way – especially when it comes to how the minivan drives. The Pacifica is more responsive with reduced levels of body roll coupled with enhanced agility that is capable of absorbing just about every bump in the road with ease. Chrysler has also made the entire body structure stiffer and the result is the vehicle drives more like an SUV than a van.

The interior is a beautifully-conceived design that is both functional and pretty to look at. The shiny black finishing on the dash, the large and easy-to-use buttons, the ample storage space all combine to deliver a cabin that is a pleasant place to be.

Under the hood we have a 3.6-litre V6 engine which is paired to a continuously variable transmission with two electric motors, and a lithium-ion battery. The total output is 260 horsepower which is less than the gasoline version but still feels quick thanks in part to the instant acceleration and torque provided by the electric motor. Plug it in overnight and you can get around 60 kilometers of all-electric driving which is nothing to sneeze at and perfect for those short trips back and forth. If you plugged it in and used only electric power for short distances you could theoretically use no fuel ever! I did make several long trips and my consumption was around 6 L/100km. It takes about 2 hours to recharge the battery using a 240-volt Level 2 charging station or overnight on your standard 120-volt household outlet. Getting a home installation of a Level 2 outlet is a must naturally. 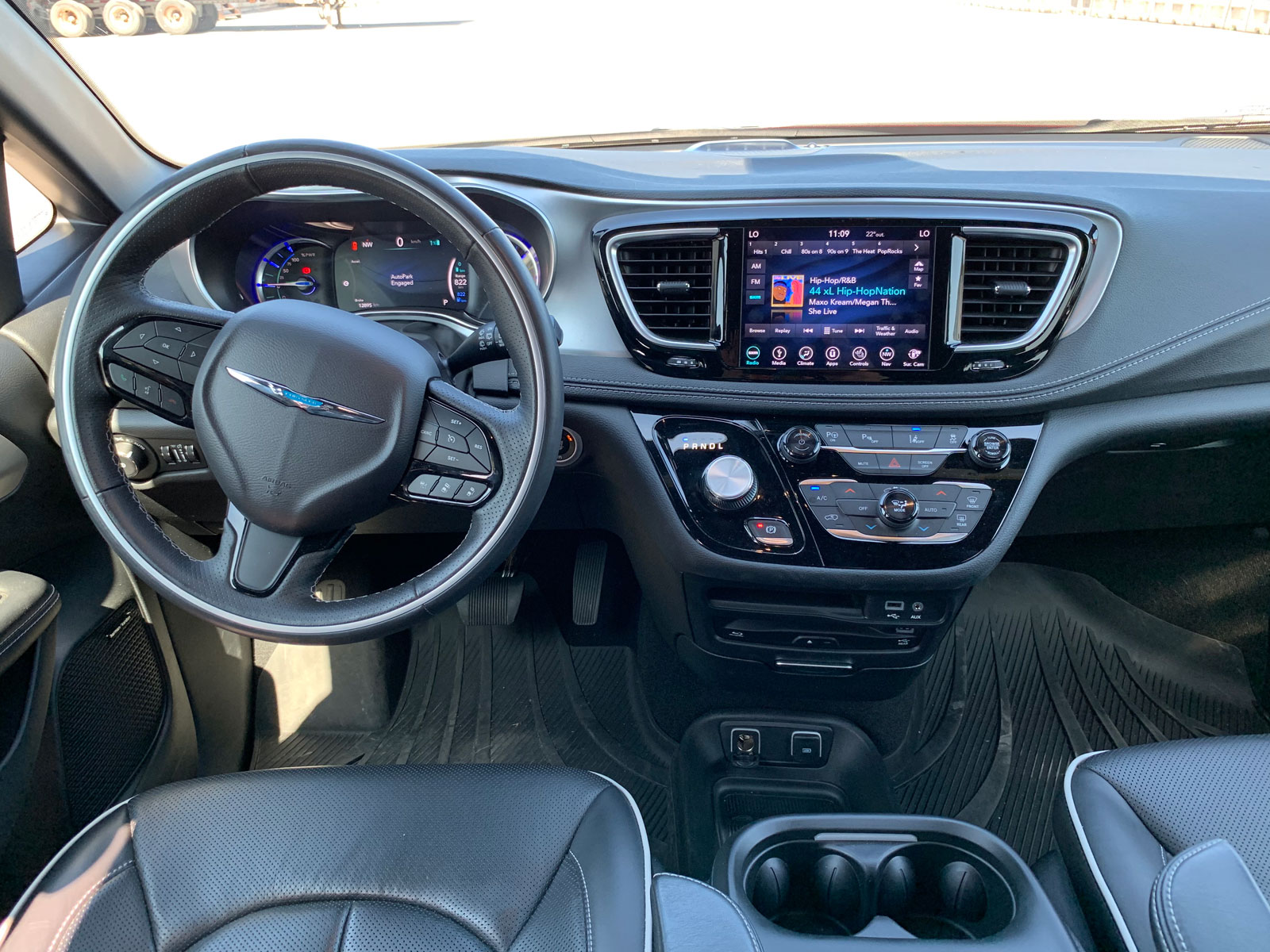 A downside to the hybrid version is that you cannot have Stow ‘n Go second row seating because the battery pack occupies that space. In the non-hybrid, however, the Stow ‘n Go option is a godsend because it allows the chairs to fold directly into the floor.

I used the DVD rear seat entertainment system extensively during the week I had the Pacifica. The Uconnect system from Chrysler is one of the most user-friendly on the market. I would prefer one single screen on the roof rather than two separate ones on the back of the seats because if you have more than two children, they will fight over seating position.

Unfortunately, I did experience several bugs which resulted in a blank screen being shown instead of the Uconnect theatre. Various combinations of turning the system off and on in conjunction with powering the vehicle off and on usually resolved the problem but this needs to be addressed because it isn’t the first time I’ve had problems with Uconnect.

Right now you can get a base model Hybrid Pacifica Touring Plus for $37,688 after government and manufacturer incentives. The Limited you see here starts at $43,188 and features Nappa leather, power sliding side doors, the multimedia centre and a 13-speaker Alpine sound system. The Pacifica remains a great people mover with plenty of features and more than equipped to hold its own against the upscale competition. 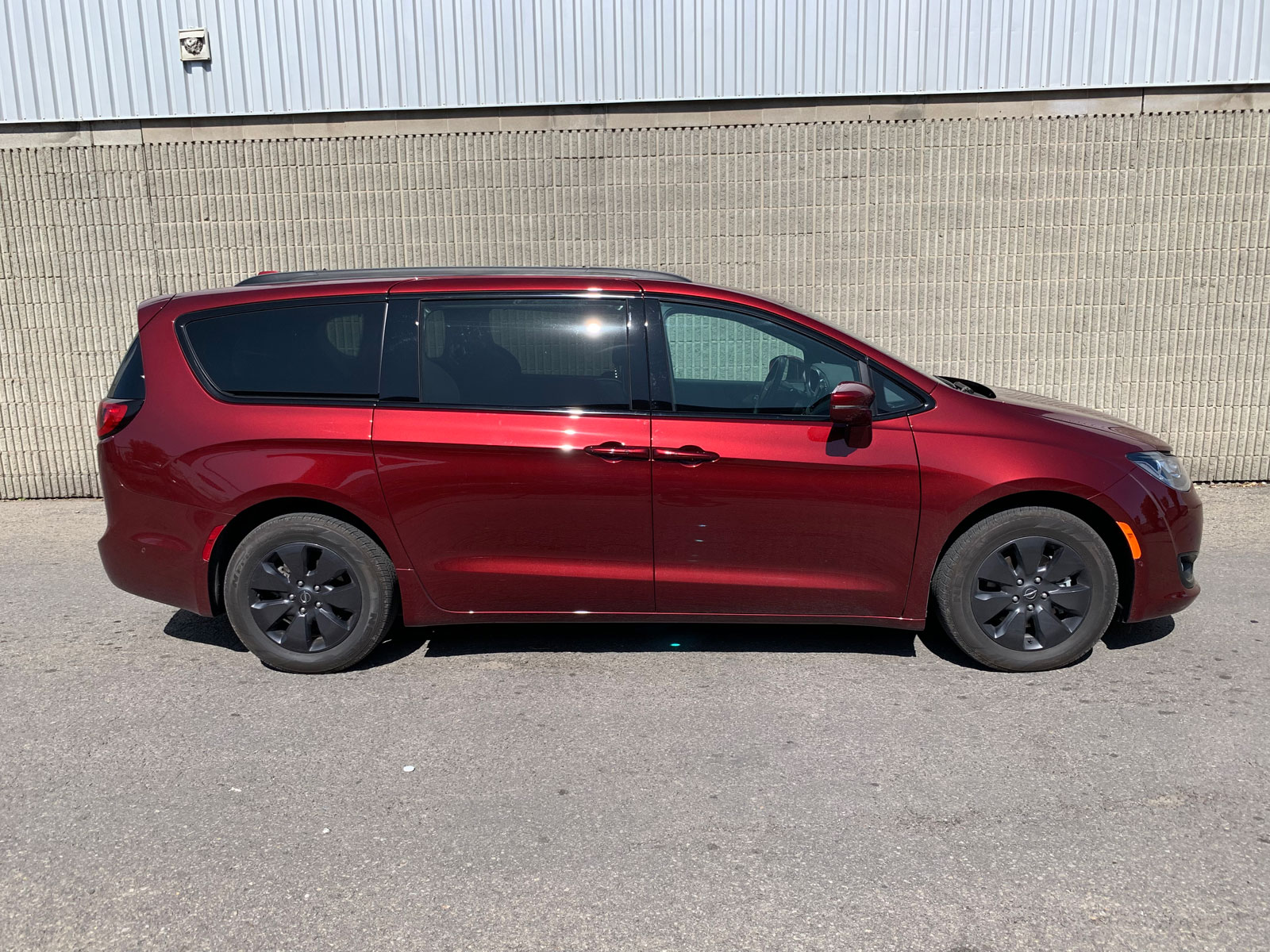 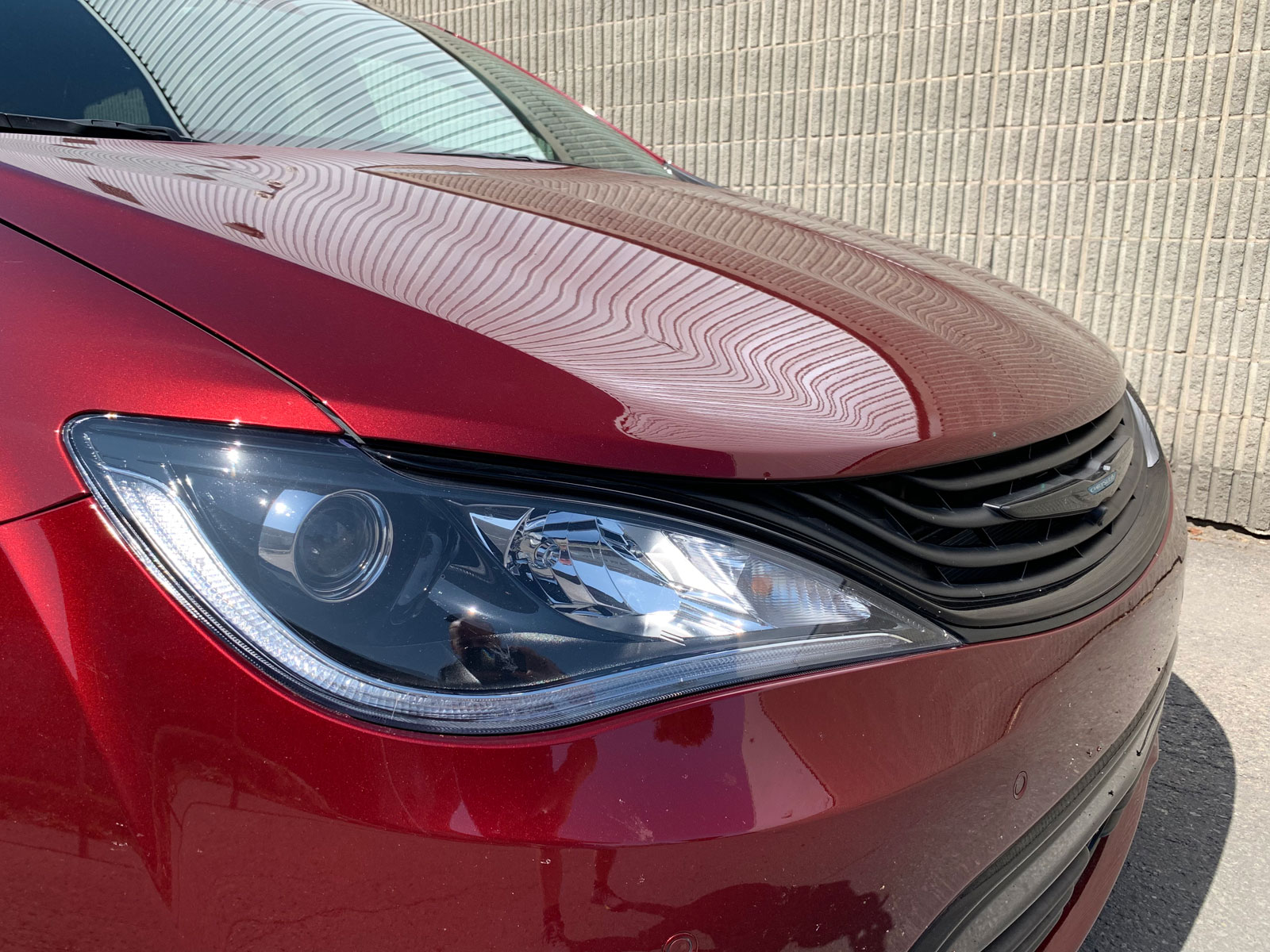 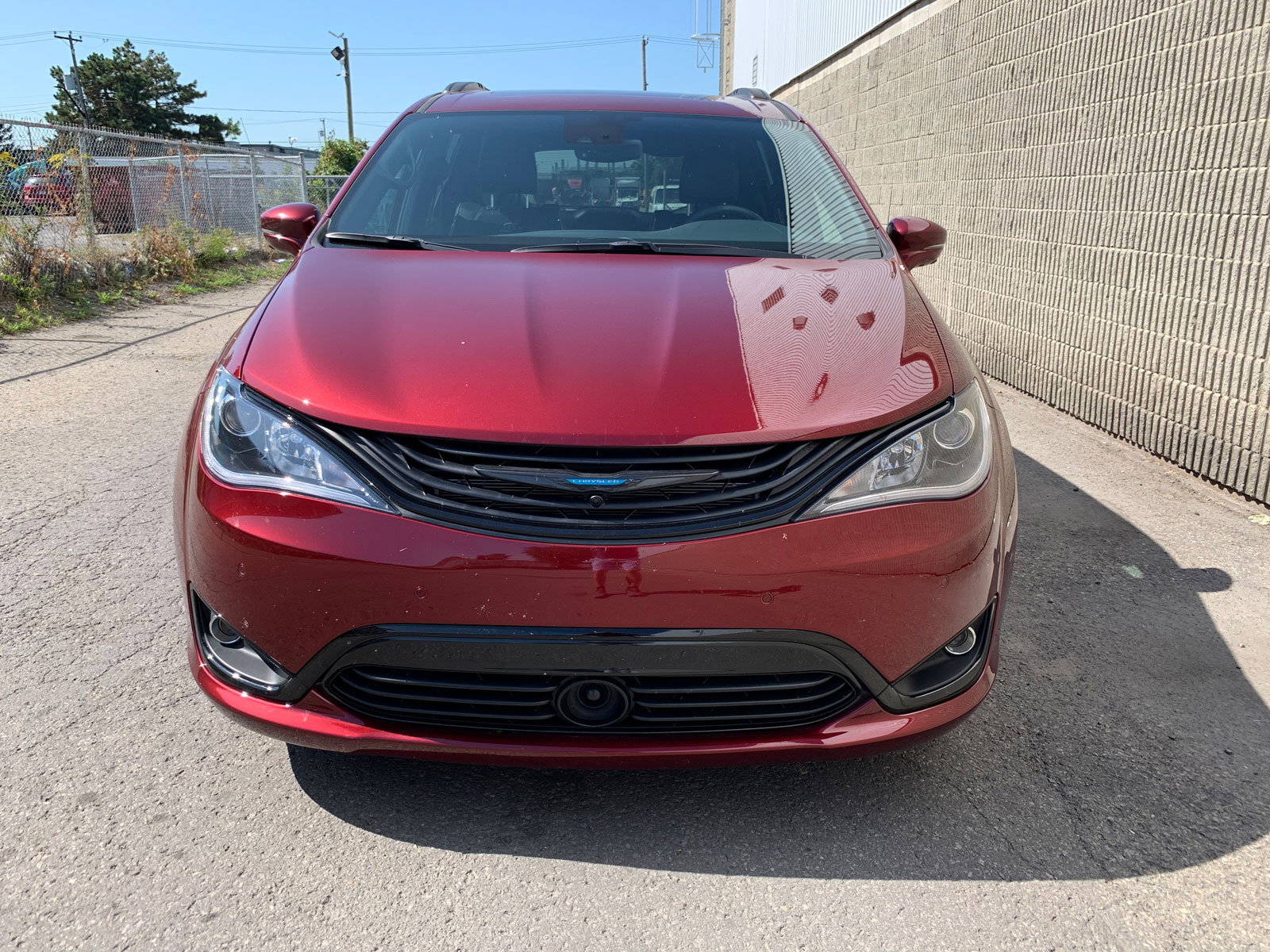 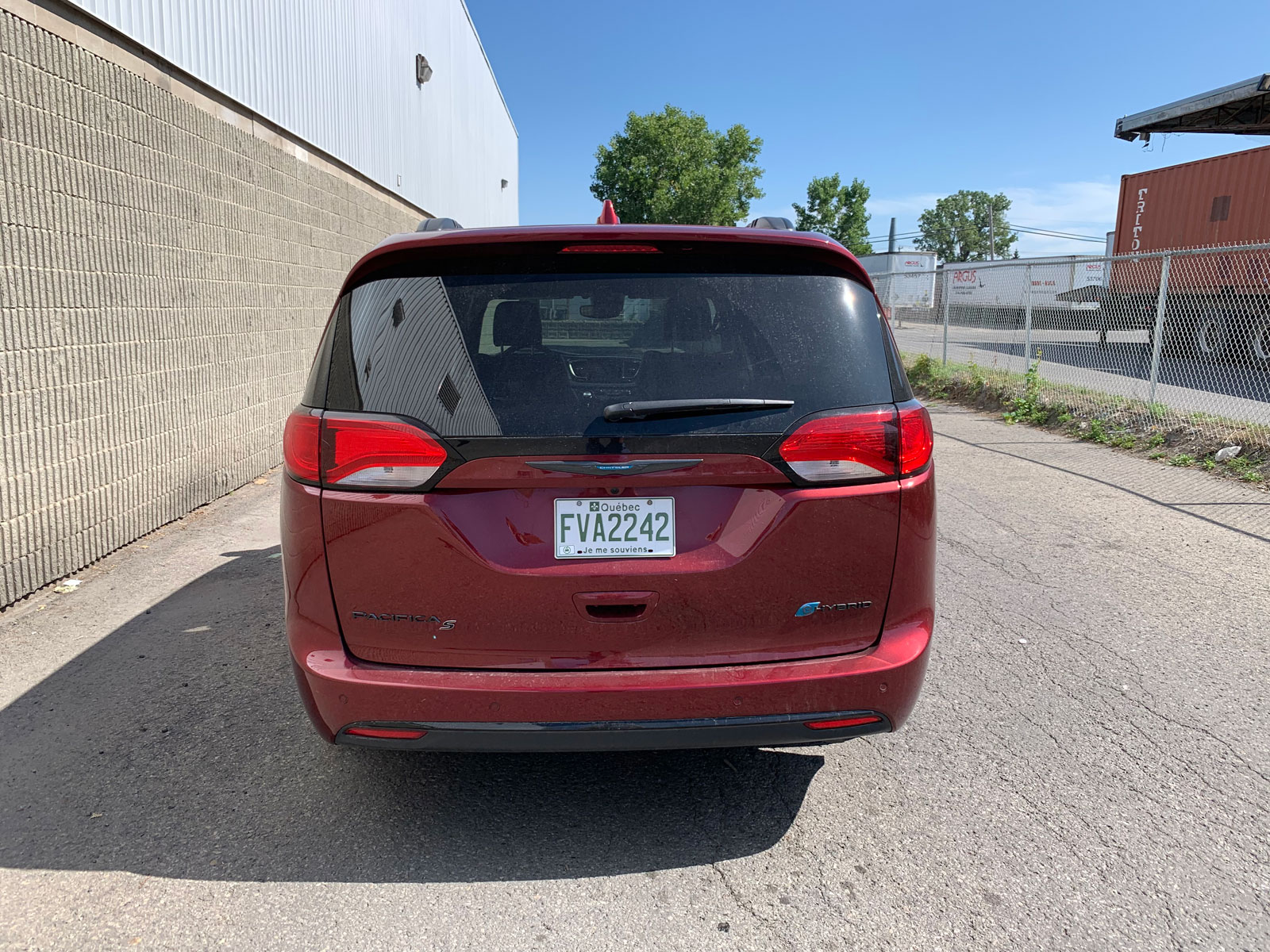 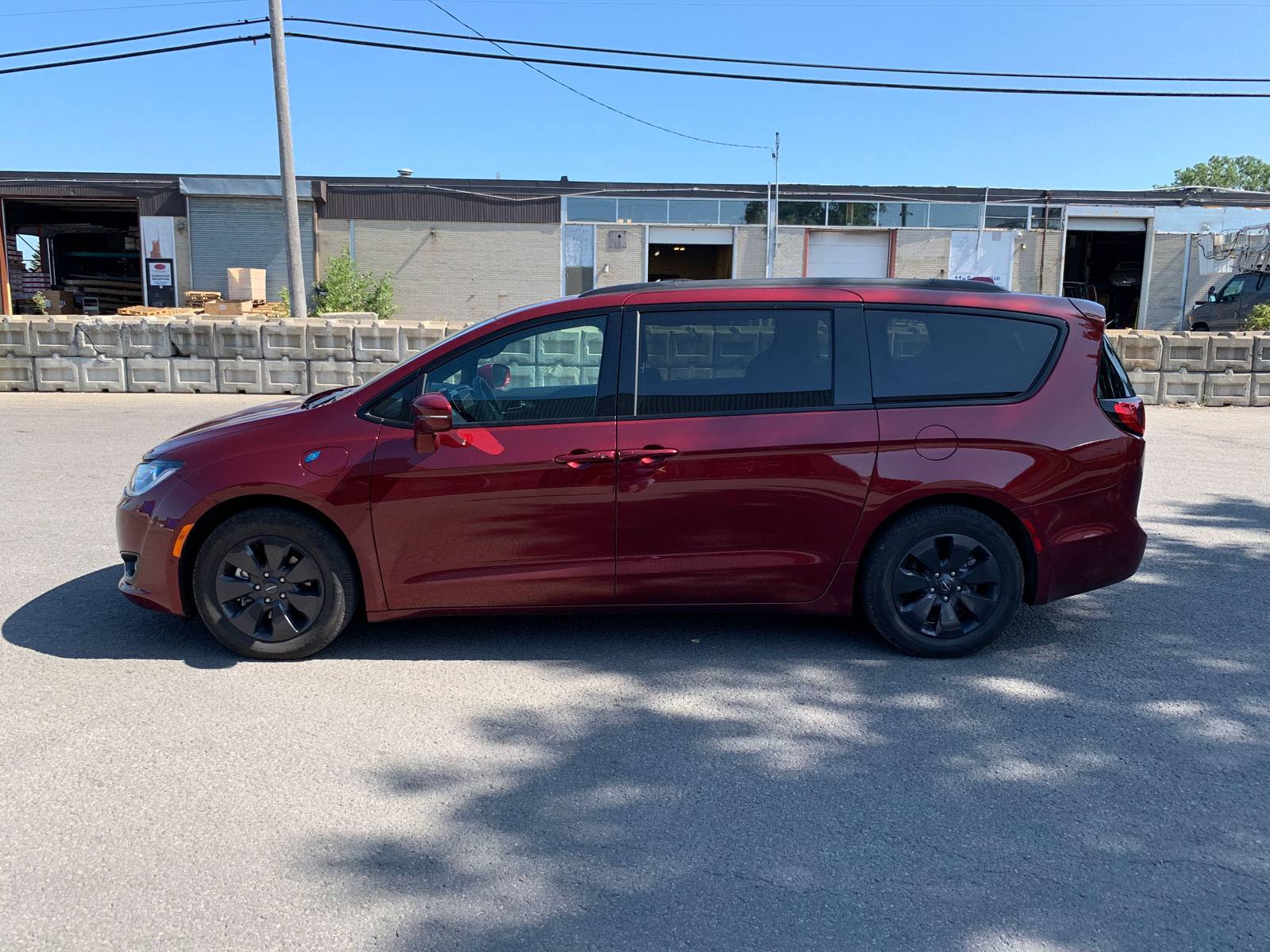 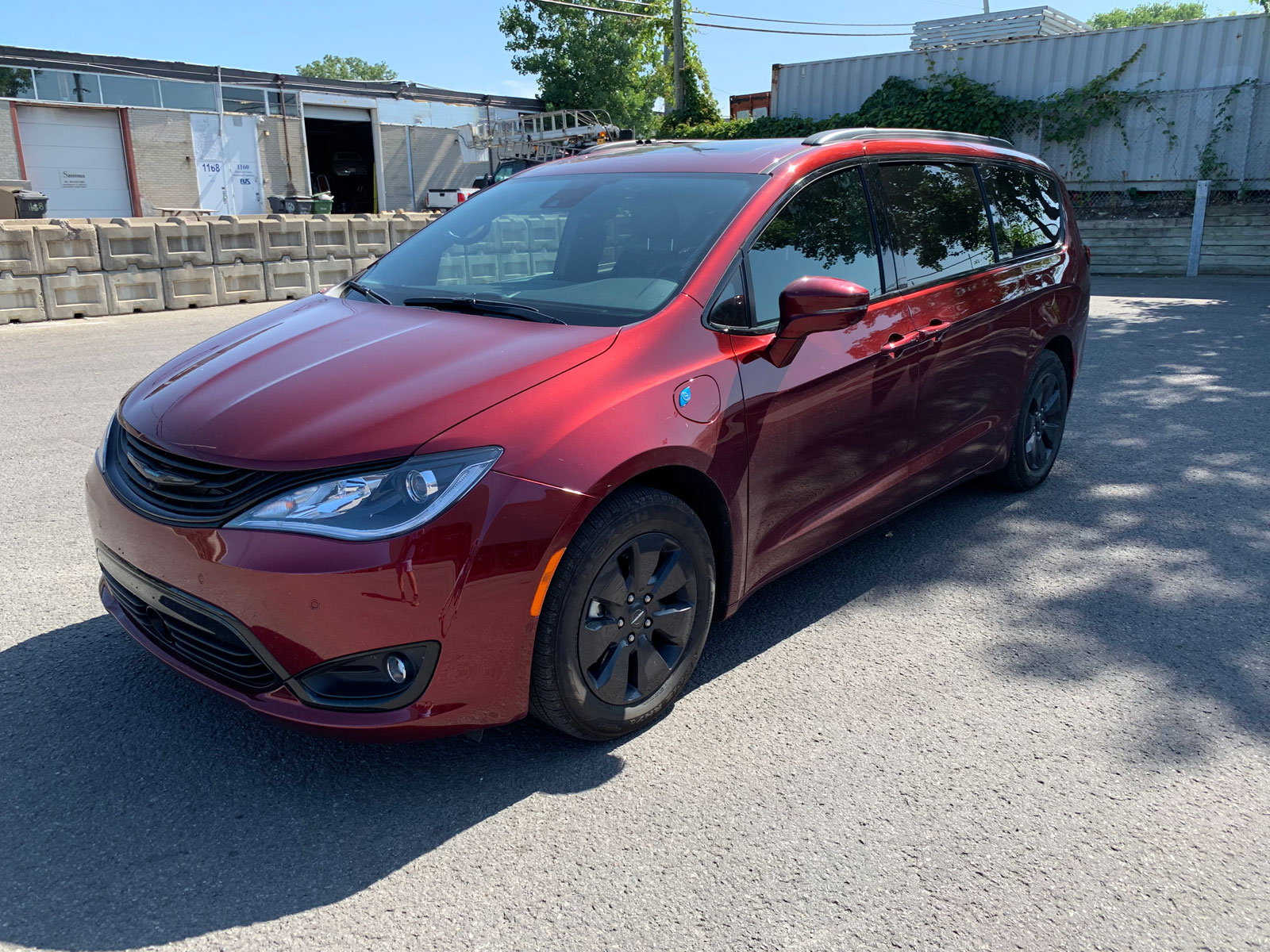 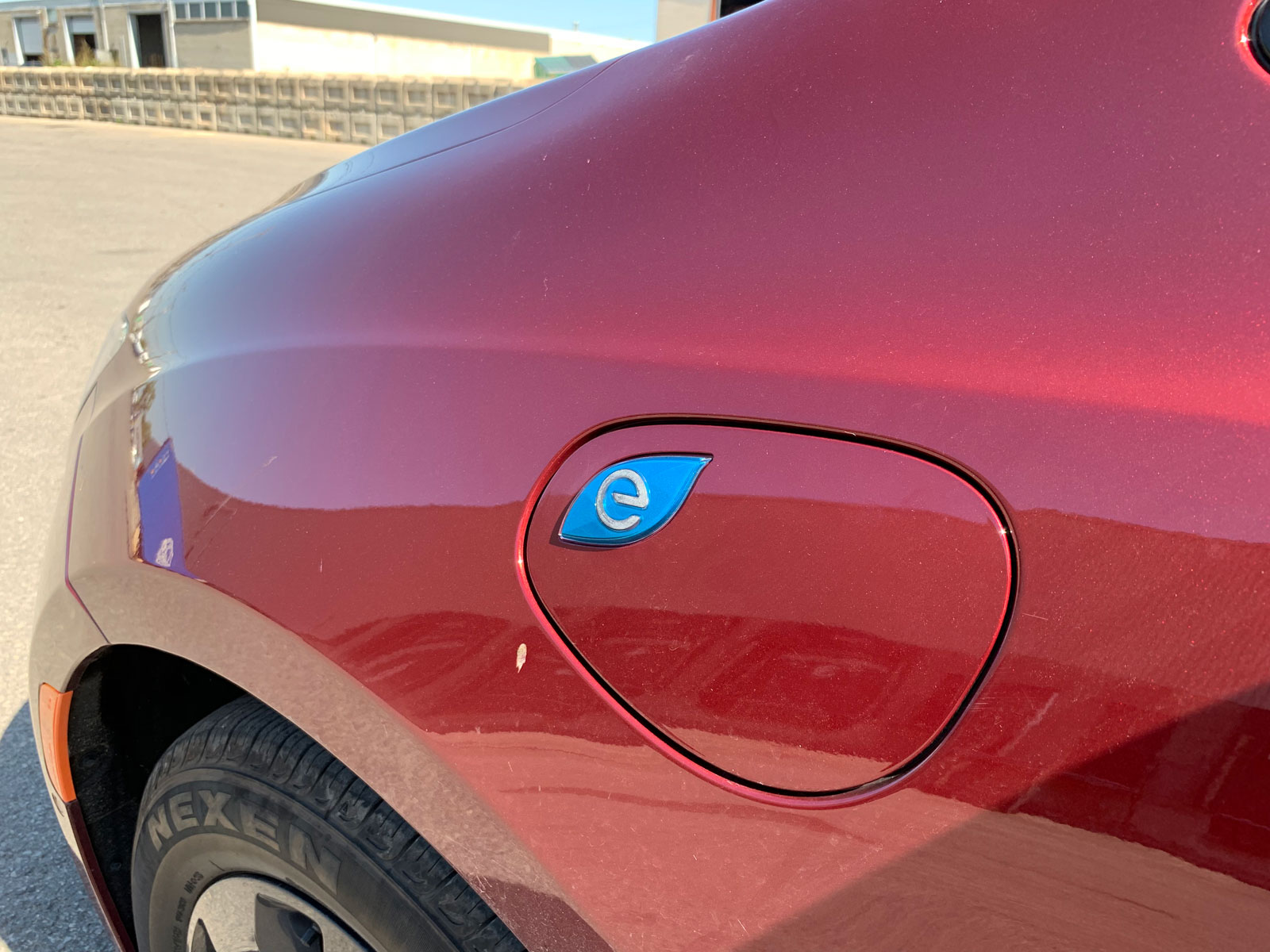 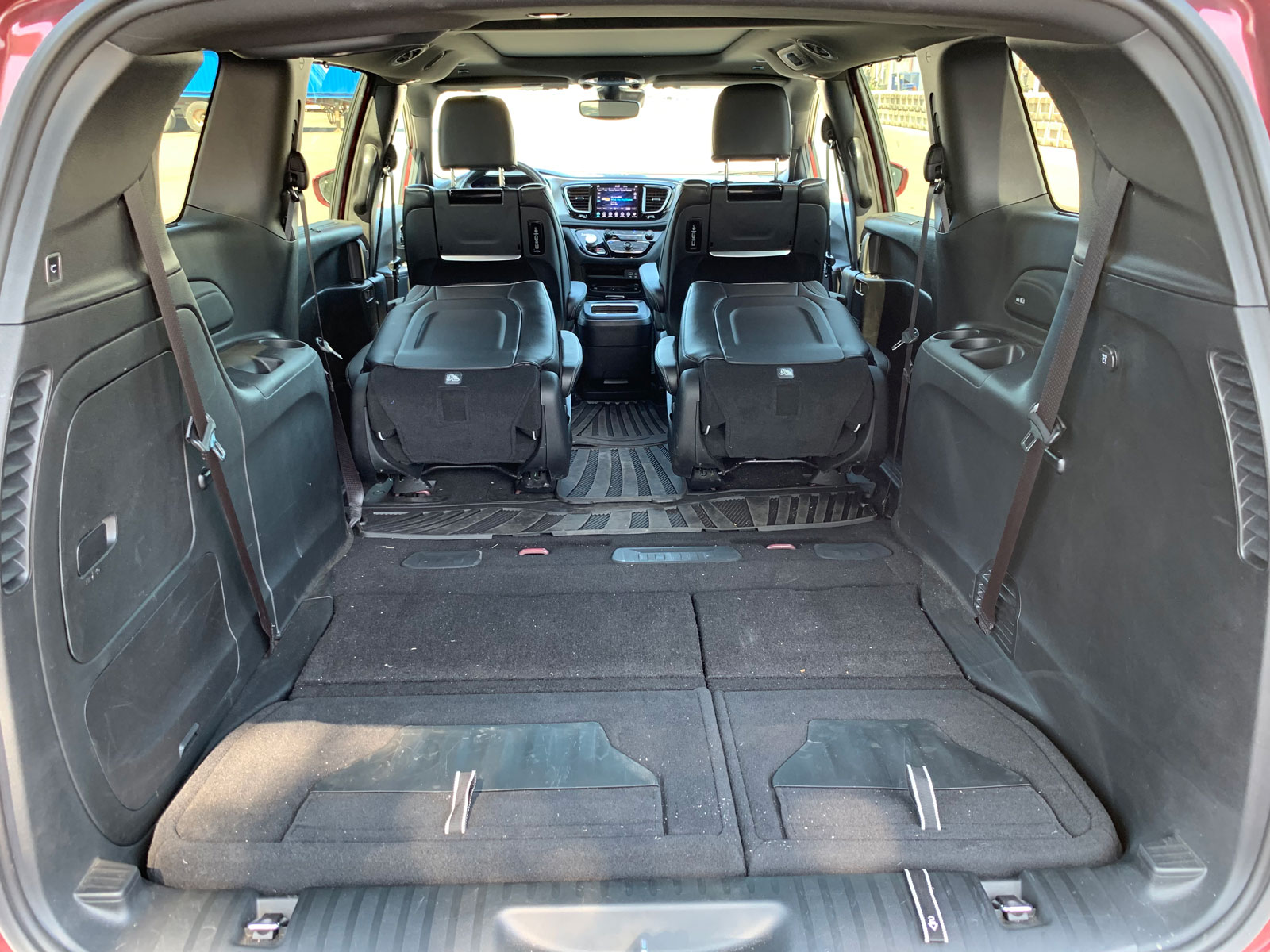 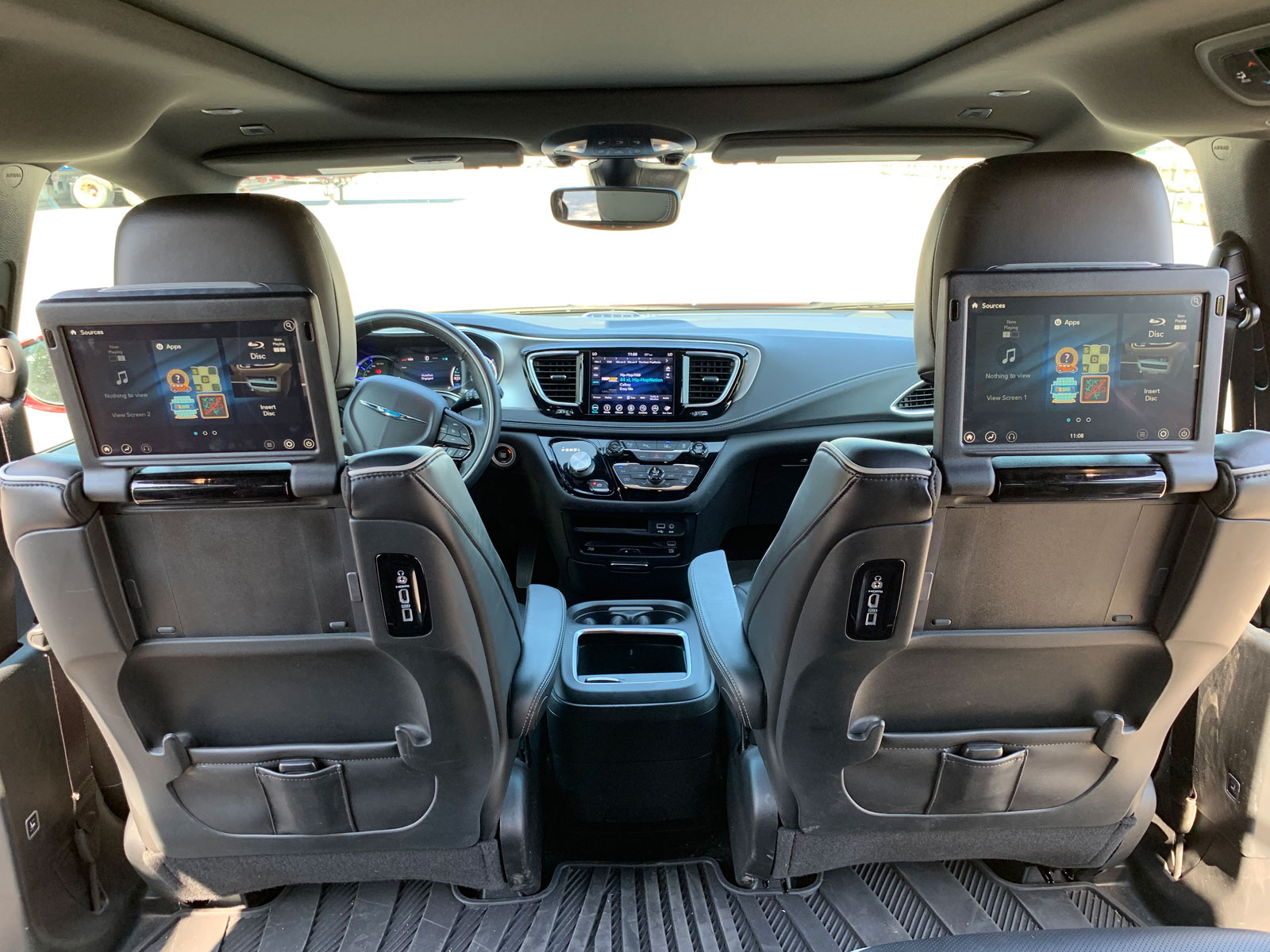 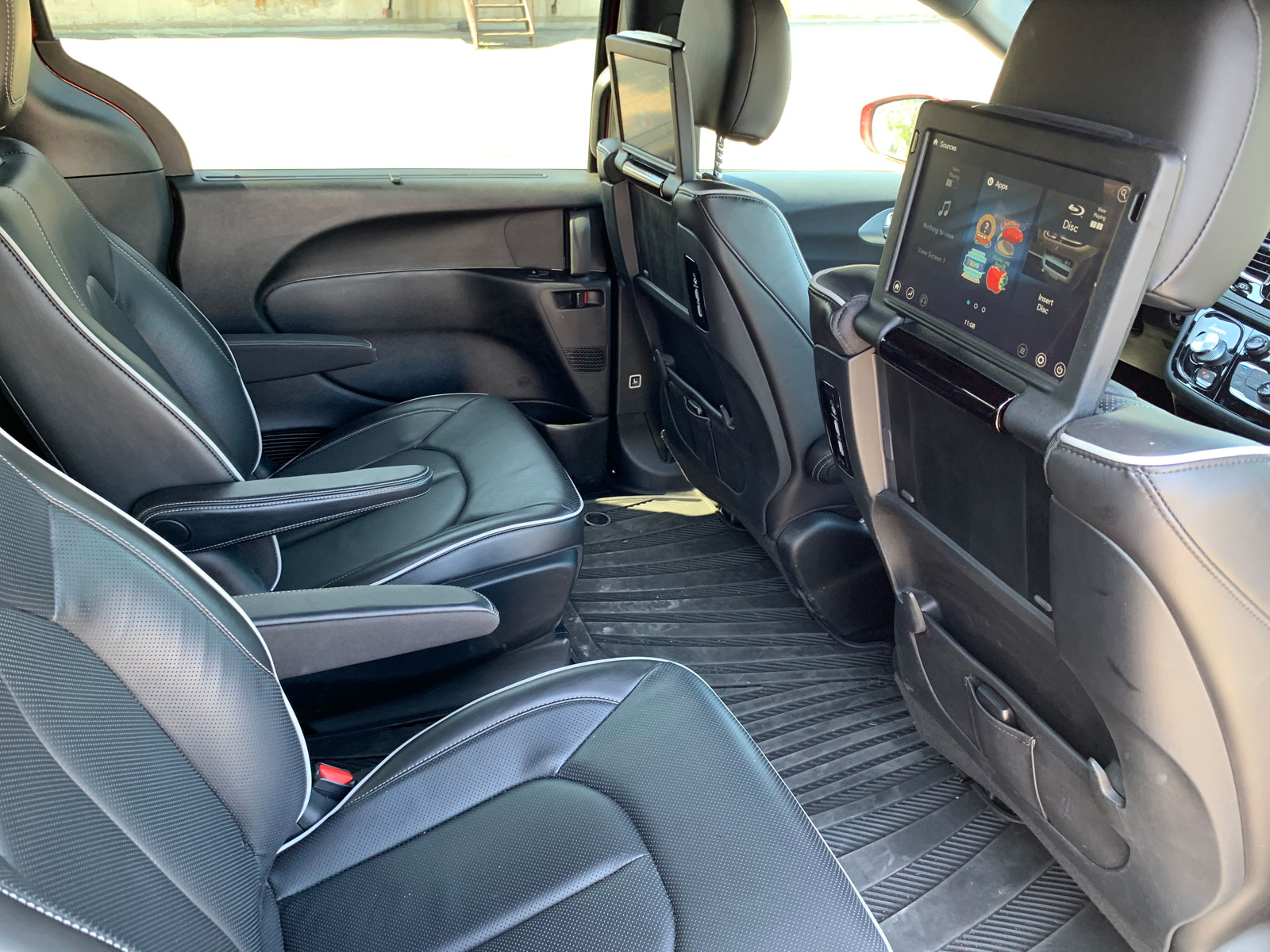 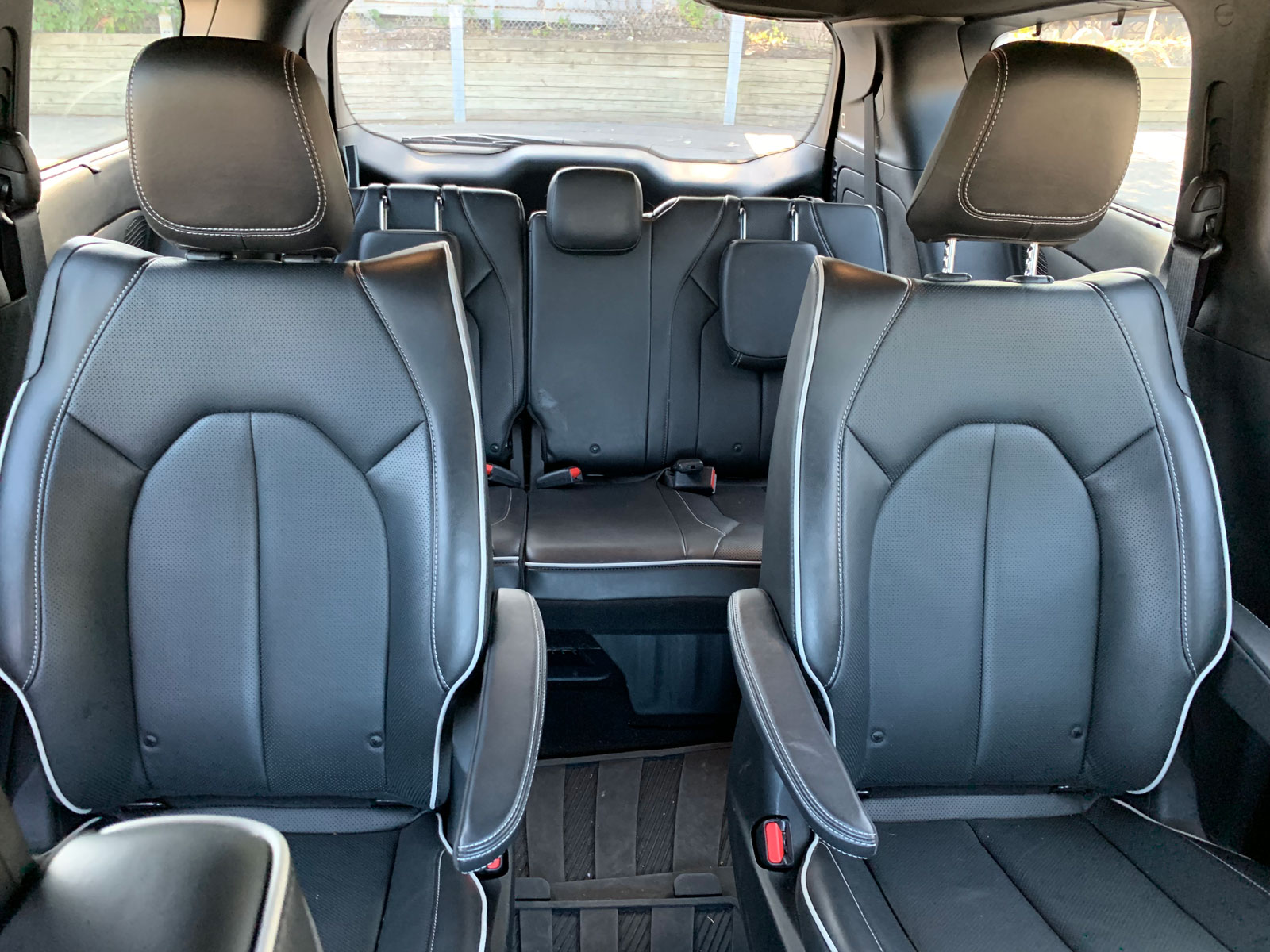 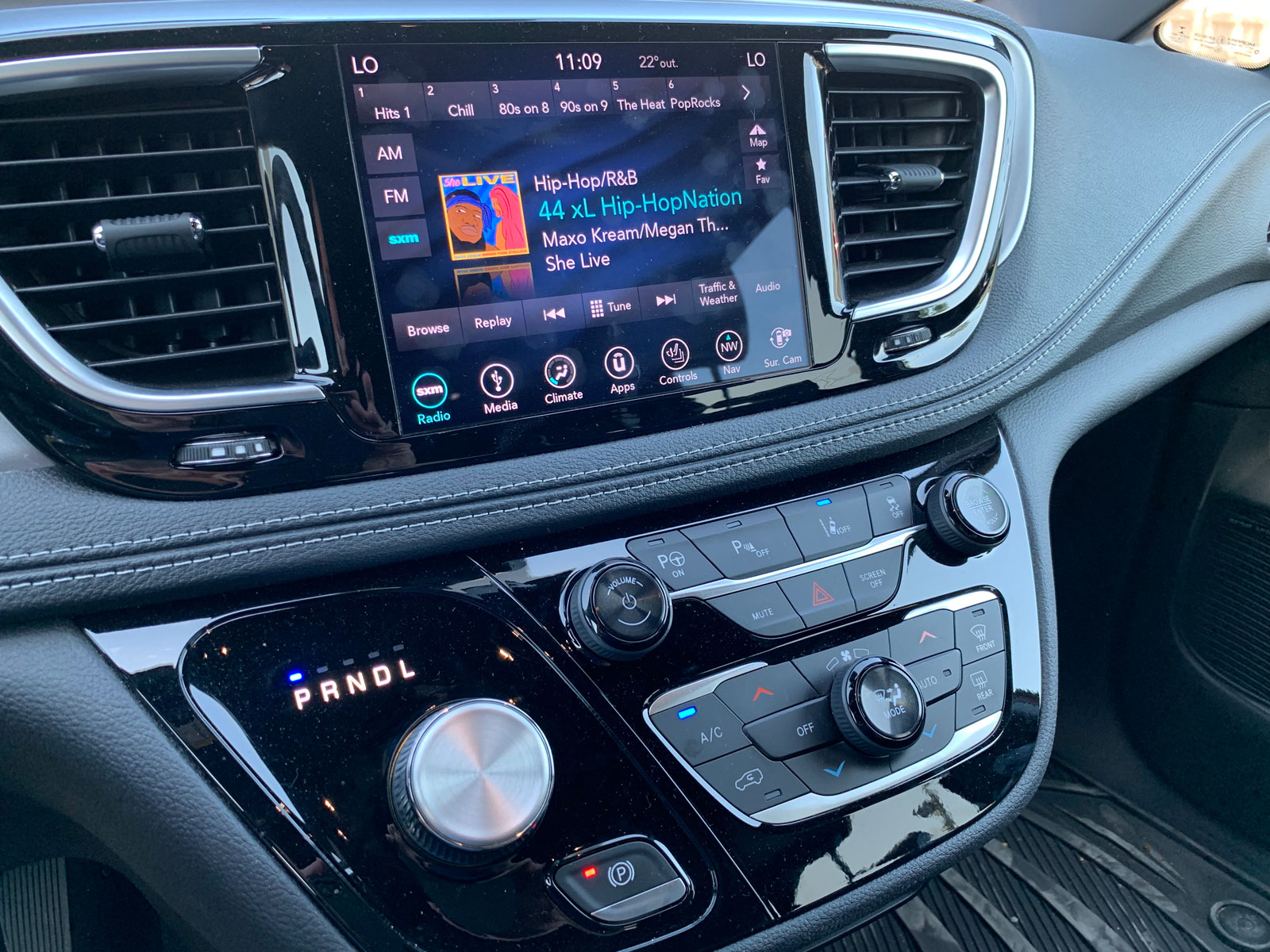 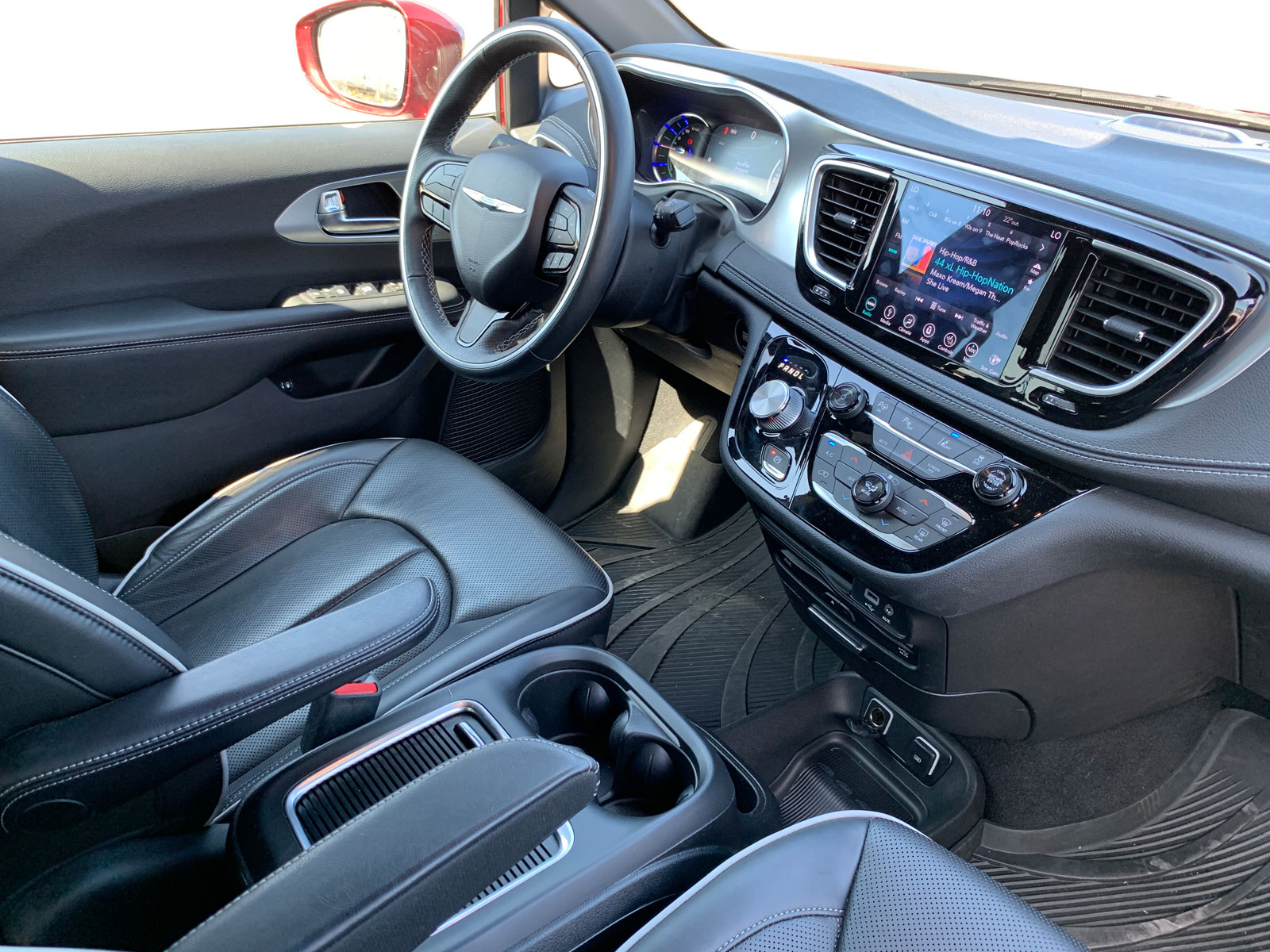