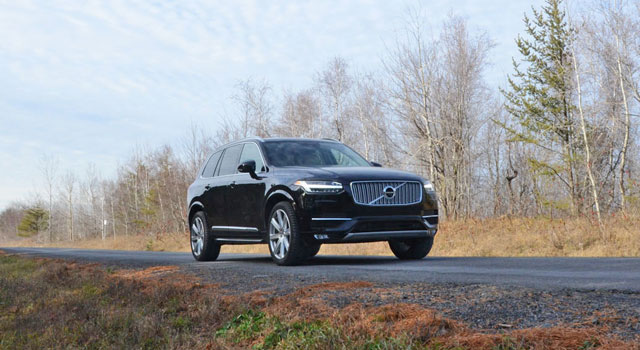 When the first generation XC-90 was introduced for the 2003 model year it quickly became one of the Sweedish brand’s most popular models in North America. In 2005 Volvo sold more XC90s than any of its other models with worldwide numbers at 85,994 units. The safety and practicality of the vehicle was beyond reproach and even famed British car reviewer Jeremy Clarkson owning several for himself.

It’s unlikely Volvo planned for the generation to be active for so many years but fortunately the look aged remarkably well. Still, twelve model years is quite long in the automotive world and as a result, Volvo has lost some market share to the competition.

Everything changed in August 2014 when Volvo revealed the fully re-designed XC-90 to much fanfare (including my own). Several months prior, the reveal of a gorgeous concept called XC Coupe had given us some insight as to what we might expect and Volvo did not disappoint.

The front fascia with its deep grille and T-shaped LED daytime running lights offer a sleek, almost shark-like snout.  Large, rounded wheel arches continue the beefy look from the side and over to the rear. Despite being an all-new design, the vehicle is instantly recognizable as a Volvo from any angle and arguably one of the best-looking SUVs on the road.

This product represents the way forward for Volvo in terms of both design language and the new scalable product architecture (SPA). SPA will allow it to use the same platform to be scaled to different sizes depending on the vehicle providing savings for both cost and weight while increasing strength. Volvo plans to release eight more new models by 2019 so we are witnessing the rebirth of the entire brand.

Volvos are famous for their safety and this XC90 T6 Inscription (that’s the trim level) came with all the technological bells and whistles including energy-absorbing seats, City-Safety low and high speed collision mitigation, lane departure and rear cross traffic alert, lane keep assist (which steers the vehicle back into the lane should you forget or become distracted) intelligent cruise control, heads-up display, surround-view camera self-parking ability and Volvo On Call.

The interior comfort and layout was simply amazing. It felt as if I was driving a La Z Boy couch around town. Brushed aluminum accents and wood panels give it a very rich look and the placement of standard amenities such as armrests, cup holders, window controls and door handles is perfect. That may seem mundane but I find some other manufacturers still struggle with basic ergonomics so I always make sure to evaluate it. There was space to put three child boosters in the middle row which isn’t often the case even with some SUVs.  Third row seating is standard and can actually accommodate adults somewhat comfortably.

I felt at ease from the minute I sat behind the wheel and that’s a very important feeling for a vehicle to instill. The drive was extremely smooth thanks in part to the optional air suspension but, more importantly, handling and braking were not sacrificed in any way to obtain this smooth ride.

Volvo has a brand new infotainment system called Sensus Connect and it’s the focal point of the new de-cluttered dash layout. Almost all the vehicle’s functions are now administered via the touch screen (complete with iPhone-like home button) and only a select few buttons for the defroster, hazard lights and volume remain. Some people may favor this but I wasn’t totally comfortable accessing things like the climate controls through the interface though I suppose with time anyone would adapt. The other thing I felt was missing is a “source” button on the wheel to change between AM/FM and Satellite inputs.

Having the vehicle for only a week didn’t allow me to learn everything there was to learn but the manufacturer offers a free course on how to use the system which I would highly recommend. In addition, Apple CarPlay can be ordered with your new XC90 before or after purchase. If ordered after, a dealer visit is all that’s required to upgrade the system.

Volvo has decided to offer only four-cylinder engines which may deter a select few performance-oriented buyers but it’s probably not a big deal in the SUV segment. The T6 model is powered by a 2.0-litre turbocharged & supercharged (yes, you read that correctly) inline four cylinder motor. Volvo engineers have managed to combine dueling methods of forced induction in order to extract remarkable performance – 316hp & 295 lb. ft. torque to be exact. The distinct pitch of a four-cylinder is apparent when stepping on the gas but it had all the power I needed and more. The XC90 T8 uses the same gasoline motor but adds an electric motor capable of producing an additional 83 horsepower for a total of 403hp. The T8 also adds 40 kilometers of all-electric driving range and much better overall combined fuel economy. Official figures for fuel economy (in liters per 100km) are 11.5 City / 9.5 Highway / 10.6 Combined. I averaged 11.5.

The Volvo XC-90 TC Inscription starts at very reasonable $66,800. Volvo has been very generous with standard equipment – especially on the base model ($60,700) including LED headlights, navigation and automatic climate control. With the vision & climate packages plus a select few options such as 21-inch wheels, the Bowers & Wilkins sound system and four-corner air suspension, the tester topped out at $77,650 before transport and prep. You can play around with the configurator at www.volvocars.com.

Volvo has certainly upped the ante in the coveted and crowded Luxury SUV segment. Other vehicles competing with the new XC90 are the BMW X5, Mercedes GLE (formerly called the M-Class), Range Rover Sport, Porsche Cayenne, Lexus GX 460 and Jaguar F-Pace. If you’re in the market for one, be sure to test drive one because one thing is for sure – Volvo’s back!