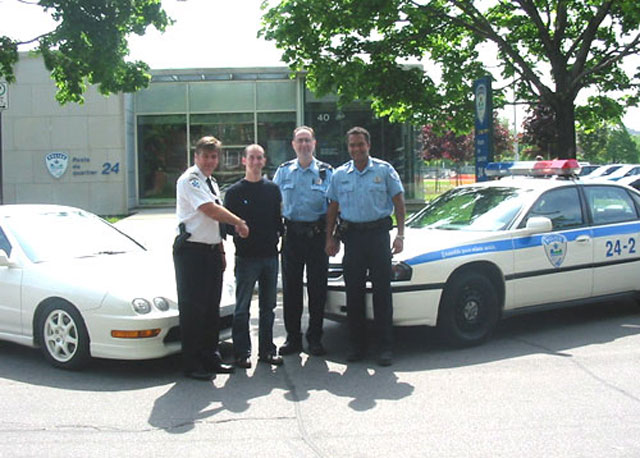 DannyITR with the SPVM at Poste 24

MontrealRacing held several meetings with the MUC police concerning streetracing and modified vehicles. The goal of the meetings was to establish a way for us to work together to promote safe driving and to increase the general relations between the tuning scene and the police. The meetings were held at station 24 which is near the Orange Julep in the Town of Mount Royal. The station commander explained to me how much of a problem streetracing has become for them and the more incidents that occur on Thursday nights. He also said that with each new incident, more police presence will be required to prevent injuries or loss of life by irresponsible drivers.

Their message is very simple concerning modified cars. The police do not create laws they enforce them and if you are in violation of the law they have no choice but to ticket you. The gatherings are ok as long as nobody breaks the law. From one car enthusiast to another I ask you to please respect the laws and the Code de la Securité Routière in the interest of your own safety and of those around you. Please read their message below.

Station 24 would like to take this opportunity to inform the readers about the dangers when one does not respect the Code de la Sécurité Routière du Québec. The freedom that comes with driving a vehicle is accompanied by great responsibility. Its very easy that an out-of-control vehicle is a deadly weapon and can cause terrible injury to the occupants or bystanders. The police look after the lives of those who neglect to do so. The MUC police have a double responsibility : • prevent risk of an accident ; • enforce the laws of the Code de la Sécurité Routière. Police must stop any vehicle in violation of the law for dangerous driving, streetracing or illegal modifications that could cause serious injury to anyone on the road. Here is a brief summary of some basic traffic fines :

Agressive driving, streetracing and illegal modifications can cause accidents, injur other drivers and endanger or kill bystanders and spectators. It could happen to you or someone you love. We ask for your cooperation and wish you a happy safe year.

Montreal has numerous gatherings around the city for modified cars. Before we go on, we must specify that gatherings do not mean streetracing. It used to be the case until the police cracked down on the problem and virtually eliminated the activity a few years ago. There may be a few isolated races here and there but they never last long. We also feel the need to point out that gatherings and streetracing have been going on for generations. This is not a new thing that started in June 2001 when the Fast & the Furious was released. Many journalists seem to have this notion and have tried to portray this scene in a way that makes us out to be outcasts. We get many requests to talk about the scene each year and actually entertained a few journalists in the beginning but not anymore. Our policy is that due to the lack of knowledge and ignorance in the media, we do not speak to them. It’s always the same questions no matter who is asking: “how did you get into the streetracing scene”, “do you think it’s dangerous?” “do you think the Fast and the Furious had an impact?” Blah Blah Blah. We hope that most of you will take this same approach if you ever approached by a journalist.

So where are the meets? Visit our meet forum.

It’s happened to us all at one point or another. You’re at a red light sitting in your ride when another fixed up car pulls up next top you revving his engine. The guy thinks he can beat you in a street race otherwise he wouldn’t be bothering you. He is basically saying “My car is faster than yours and I’m going to spank your arse when this light turns green”. Most people take their cars very seriously. When you insult someone’s ride it can get very personal since our rides are our way of expressing ourselves. You obviously want to show this punk that your car is better than his and when the light tunes green you plan to rip his car a new tailpipe. What separates the men from the boys and the women from the girls is those of us who don’t need to prove our car is faster by racing on the street. By not racing, some people would be afraid of being considered a chicken. Not so. By not racing him you’re telling him that you don’t care about his car, you don’t care about him and you have the maturity not to engage in an illegal and dangerous activity that could end of costing one of you or someone else their life in a split second. So the next time someone tries to race you at the stoplight take pride in winning the maturity contest and ignore him. Most drivers are probably smart enough not to race from stoplight to stoplight but what about organized streetracing? We all agree that organized racing in a secluded industrial park lowers the chances of killing innocent bystanders but what about yourself or your friends? If you die, you scar everyone who cares about you for the rest of their lives. It may seem safe racing when nobody is around but it has been our experience that there are always idiots tat MUST show off by attempting stupid and dangerous stunts in front of crowds of people. Not only that, but there are other differences between a race track and a street such as a small animal running onto the track and causing an accident, a large bump in the road, or a car pulling out of a dark parking lot that you didn’t see. These factors are real dangers and are overlooked by street racers. Aside from the danger, there is another huge downside to streetracing: it’s illegal. If the police catch you racing on the street, it’s a minimum of a $400 fine and 6 demerit points. That’s a hefty price to pay when you could have gone to a track and raced for $20 don’t you think?