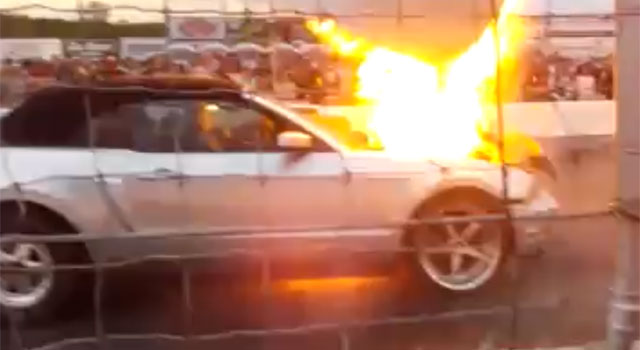 Mustang explodes at the starting line at Autodrome St-Eustache

You’ll have to visit our Facebook page to see the video as it was uploaded by a spectator and shared only via facebook. In the video we can see a massive fireball erupt under the hood as the car prepares to launch down the 1/8-mile strip.

Fortunately nobody was injured but MontrealRacing.com photographer Jeremy Glover was standing just feet away when the incident happened.

“The hood went twenty feet into the air, over the catch fence and into the crowd”, Glover said. “Thank God nobody was hurt but my ears were ringing all night after the explosion”.

Drag racing is a relatively safe form of motorsport but as you can see from this incident there is still an element of risk.

The flames were hosed down immediately by the track’s safety crew and the car was removed without further incident.