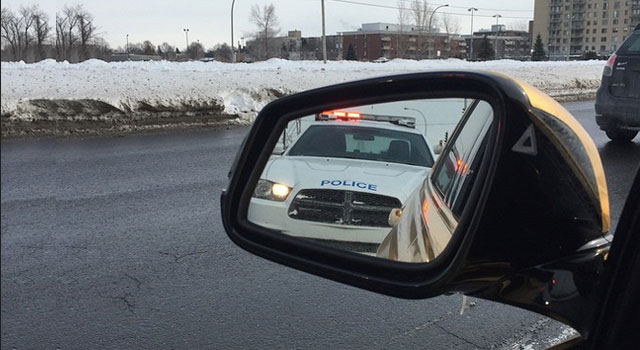 The Journal de Montreal ran an article about local businessman Corey Shapiro and his gold BMW and how he attracts an unusual amount of attention from the SPVM.

Shapiro has made a name for himself by selling high-end designer sunglasses to some of the biggest stars in Hollywood. His company is called Vintage Frames and has clients such as Lady Gaga, Elton John and Puff Daddy. He also owns a number of other local businesses.

His new BMW 328i xDrive wagon was given to him for free by BMW Canbec and the $10,000 gold wrap was done by another Montreal company called Auto Optics.

Shapiro documented his interactions with police via Instagram and the higher-ups have taken notice. Commander Ian Lafreniere, head of the SPVM’s communications division has invited Shapiro to meet with local officers in order to smooth things over.

Read some of the posts below :

The police officer asked me where I was going. The answer, same as every Saturday, work. P:What kind of work do you do in those gold teeth? M: I curate lifestyle. P: I asked you for the truth! M: You wouldn't understand my truth, but I just gave it to you anyways. P: Must be busy "dans la rue"! M: Actually it is only because you are blocking traffic! P: Your being a smart ass with me! M: Your profiling something you don't understand. P: Why do you drive a gold car? C: For the same reason you have chosen to drive a police car, personal preference. P: Gimme all your papers and stay here. M: Not a problem officer! As the office comes back and asks to see inside the car he sees my baby seat and says; P: Your setting a bad example for your son with this car. M: I am teaching him silver isn't good enough, always to strive for gold. It's #Saturday the greatest form of killing is killing with fucking kindness. To all you fathers choosing to do you, congrats on breaking down the walls. Don't let the world judge you when only you know what's right for you. The color of your skin, or the color of your car, or the color of your clothes will never label the man you are inside. Let the world stop and give you a ticket for innovation. #MorningInspiration #VintageFrames

My day once again starts with a visit from our local "fashion" Police. This time once again curious where I am headed, today a different answer. P: Why are you in this area? M: I own this area. P: What do you mean by that? M: I am a large supporter of property taxes on the street. P: What do property taxes have to do with this? M: I think they are just about as non relevant as the reason you are stopping me. P: I think the car is (H)Ugly! M: Please don't hug my car! P: I said UGLY! M: Oh, I thought I was being stopped by the law, not Karl Lagerfeld. From the backseat I here my son chime in… C: Dad why are they wearing Bape? P: What is Bape? M: Its a Bathing Ape P: You just call me a monkey? M: That's none of my business, but I don't sip tea. It's #Sunday thank you for teaching my son that the clothes will never make the fucking man. Power shall never be given, it is only earned. A hint to the police, it's the criminals that move in silence, not with their volume on loud. #MorningInspiration #VintageFrames

BMW i8 leaked ahead of Frankfurt Autoshow