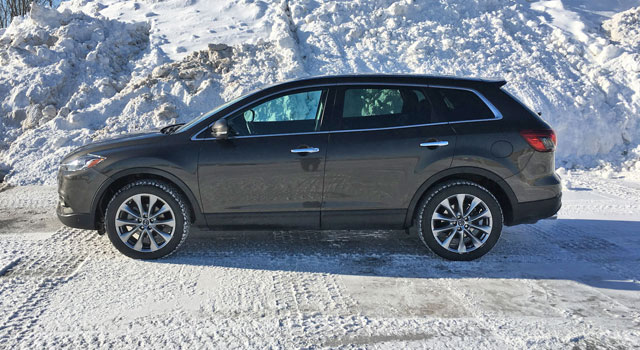 I probably have the honor of being the last person in the world to write a review about the 2015 Mazda CX-9. I can say this because this article comes on the heels of the unveiling of the brand new 2016 CX-9. I booked this vehicle well in advance thinking I might be the first in the city to try the new model but sadly, it was not meant to be.

It’s great news that the new version will arrive shortly because the 2015 is getting really long in the tooth. Most car iterations are sold for around eight years and 2015 is the ninth year for the CX-9 (albeit with two facelifts during those nine years). In 2014 I wrote an article on the top ten cars in need of a re-design and the CX-9 would have been my number 11 so it was spared from my list!

The exterior still sports Mazda’s previous design language but it has aged pretty well. The two previous refreshes (in 2010 and again in 2013) helped keep this vehicle up to date with a larger front grille and redesigned taillights. It remains a very nice-looking elegant SUV.

Hop inside and you are awash with space. The CX-9 has room to carry your whole family and then some with its three-row seating. Adults should probably steer clear of the third row but that’s standard practice among many competitors. Unlike the exterior of the vehicle, the interior dash layout hasn’t really aged as well. The main screen is very small with outdated graphics. Climate info is displayed at the top of the dash and is near invisible in daylight (as you can see from the photo).  The vehicle is still very functional and easy to use which is sometimes a nice reprieve from the complicated infotainment systems we see nowadays.

Where the CX-9 really shines is in the fun-to-drive department and for a big SUV this is quite an accomplishment.  Mazda has engineered it to have almost sports car-like performance with handling I would characterize as superb and acceleration that pushed me back into my seat. Heck, even my wife who took the vehicle out said that she thought it was “really fast” and that she enjoyed driving it. Powering the CX-9 is a 3.7-litre DOHC V6 motor making 273 horsepower and 270 lb-ft of torque mated to a 6-speed automatic transmission.

The Mazda CX-9 starts at $33,995 for the base model GS version but will top out at $48,005 for the GT with all-wheel drive. If you do pony up for the fully-loaded GT, you’re treated to a variety of safety features such as blind spot monitoring, a rear cross traffic alert system, rear backup sensors and other goodies such as bi-xenon headlights with LED daytime running lights, 20-inch wheels, navigation, a Bose 10-speaker sound system, fog lights, mirror-mounted turn signals and a free 6-month subscription to SiriusXM.

The question is do you want to spend big bucks on an outgoing model when most of the competition is offering newer designs and the CX-9 replacement itself is only a few months from showing up in showrooms? That’s a question you’ll need to answer yourself but consider many dealers will offer substantial discounts on older inventory in order to make way for the new arrivals so it could present an interesting opportunity.