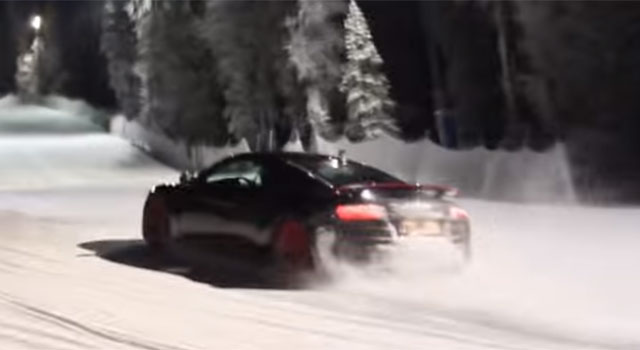 A Norwegian man decided to take his lowered Audi R8 out for a spin on the local ski slope using studded tires. The video is incredible! Read his description of the event below:

I drove over to my friend Vidar where we changed to studded tires on the R8. Vidar, who also lives in Oslo, Norway, had prepared an Ice Track on a frozen lake in Funasdalen in Sweden. We had been driven on the ice track all day when we headed for the ski slopes.

Vidar who has a cabin in Funasdalen, had planned and facilitated this for some weeks with the friendly and helpful people of Funasdalen. I must admit there was some adrenaline in my veines before we started. There was of course a risk for the cars and my pulse watch showed that I had higher pulse than usual. We decided to drive a steeper slope than what we had seen in other video clips as we had studded tires. We tested with moderate speed the first part of the hill, including the descent which proved to be a bit challenging.

After the first test run, we realized that we needed to build speed and momentum to climb the steeper part of the hill. I did not want to jump the R8, so I eased off the throttle over the first plateau, and had full power up the steep part and there was no problems for the quattros to negotiate the steep parts of the slope. The slope was newly prepared and had a smooth and even surface and put no strain on the cars. The R8 is lowered slightly, and I was afraid that it might be too low for this stunt. However, there was no reason to worry, the cars worked flawless with no damages.

The temperature was minus 30 C all day, including when we did the filming. I do a lot of laps on Trackdays with the R8 and I am also a keen skier and log more than a million vertical feet each season in Norway, but this is definately one of the coolest experiences I have had in a ski slope or in a car.

Do You Drive A Black Audi A5/S5? Help This Young Lady Find That Guy She’d Like To See Again

VW Cheated With Audis and Porsches, Too!