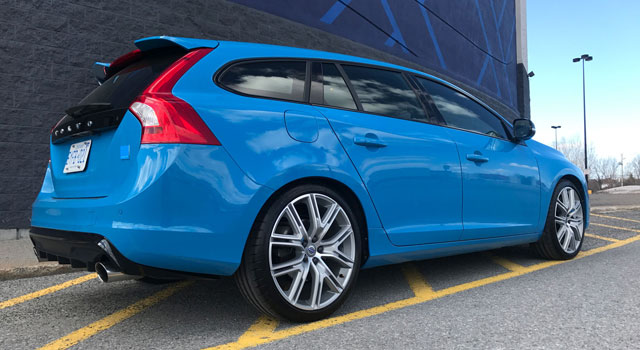 A phrase I often hear among gear heads is “why don’t they make cool cars like the Buick Grand National anymore”? For those who don’t know, the Buick Grand National was a race-inspired version of the Regal, made for five years in the 1980s. I suppose the “cool” aspect people are referring to is the fact that Buicks tend to be associated with older folk and golfing nowadays so the idea of a race version is a bit outlandish. It should be noted that Buick made the Grand National after having won the NASCAR Winston Cup Grand National series in 1981.

Ladies and gentlemen I contend that the Volvo V60 Polestar is the modern day Grand National. Like Buick in the early 80s, the brand competes in several racing series namely the Scandinavian Touring Car Championship and the Australian Supercars Championship. That said, you don’t often see many Volvos at the local race track as the demographics of your typical Volvo buyer are older, family-oriented safety-conscious people. What a glorious opportunity to destroy all pre-conceived notions and come out with a fancy race version of the family car. That is exactly what the V60 Polestar is.

Polestar is Volvo’s in-house performance brand. It used to be a standalone company called Polestar Performance which operated the Polestar Racing team but Volvo bought everything up in 2015 and made it their own. They had previously teamed up in 2010 to release the C30 Polestar Performance concept vehicle but that was never intended for production. The first two Polestar offerings to the public were the S60 sedan and V60 wagon to limited markets in 2014 but now the vehicles are widely available and Volvo produces 1500 of them annually.

For 2017 the V60 Polestar adopts the company’s new small displacement 2.0-litre inline-four with both a turbocharger and a supercharger, ditching the older 3.0-litre six-cylinder. Horsepower is bumped to 367 (up from 345) and torque is now rated at 347 pound-feet (a small reduction). That’s still an astonishing level of power from such a small engine.

Polestar has taken an original V60 and S60 and added a bigger turbo, a supercharger, new connecting rods, new camshafts, a larger air intake and a higher capacity fuel pump to augment the engine, and matched it with a BorgWarner four-wheel drive system and the new Polestar-optimized eight-speed Geartronic automatic gearbox.

On top of this new performance-optimized equipment, Polestar has radically reduced the car’s weight. The Volvo S60 and V60 Polestar are 24 kilograms lighter over the front axle and 20 kilograms lighter in total compared to the previous model years.

The Rebel Blue Metallic paint is now limited to Polestars only. It’s a gorgeous color that turns heads everywhere you drive, particularly since few people have ever seen a Volvo in such a color. If it’s too much, you can opt to get it in silver. The car sits on new 20” lightweight rims, and uses new slotted brake discs with a thickness of 371 millimeters.

Inside is where the Volvo V60’s age begins to show itself. The dashboard design is outdated and reminiscent of the 2000s with its tiny non-touch screen for the infotainment system. All things considered, the system actually works quite bell (better than some newer systems today even). The seats are comfy as heck and match the car with blue stitching. Volvo has done a great job in giving the occupant a superb driving position with all controls in close proximity.

A deep sound emanates from the exhaust upon startup, indicating the presence of something sinister under the hood. Unfortunately it quiets down a little too much after a few seconds and I would have preferred to hear that growl in perpetuity.

The Polestar drives much as you can probably expect: fast. Step on the gas and you’re propelled back into your seat with minimal turbo lag. The sound from the 2.0-litre motor isn’t on par with a six or eight cylinder but better than the lesser-tuned versions of this power plant that are employed in the lineup. Take the Polestar into the corners and the Michelin Pilot Super Sport attaches the vehicle to the pavement with ferocity thanks in part to the Ohlins racing shocks and stiff springs. For wagon lovers there is little else that comes close in this price range.

Speaking of price it’s a little hefty at $69,000 but all things considered not a bad deal. The main thing that’s holding it back is the fact that Volvo is about to reveal a new S60/V60 (likely by year’s end). You won’t be able to get one until at least 2018 and probably not a new Polestar until a year after that which means you may want to get in on one of these while you still can.