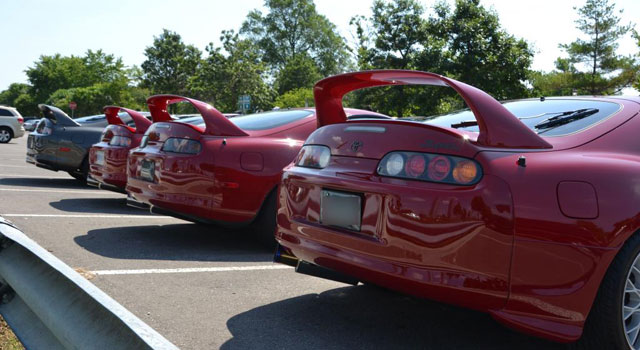 Ever since the first Fast and the Furious movie was released in 2001 it seems people just can’t get enough of the fourth generation Toyota sports car.  Like it or not the Supra has become our generation’s “General Lee” – the 1969 Dodge Charger made famous by the Dukes of Hazard television show (if you are not in your 30s you can google it).

The fourth generation Supra was sold in the U.S. from 1993 to 1998 as both twin-turbo and naturally aspirated (non-turbo) models. In Canada it was sold from 1994 to 1996 and only the twin-turbo model was available.  The 3.0-litre inline six-cylinder twin-turbo was called the 2JZ-GTE and pumped out 320 horsepower and 315 pound–feet of torque.  The 2JZ-GE non-turbo engine (also 3.0-litre) made 22 horsepower and 210 pound-feet of torque.

The suspension, drivetrain and non-turbo motor were shared with the Lexus SC300/400 models. Both manual and automatic transmissions were available.

According to the Supra enthusiast website MKIV.com, 11,239 fourth-generation Supras were sold in the USA. We can’t find any info on Canadian Supra sales.

We regularly see kijiji finds involving people asking exorbitant prices for Toyota Supras like this one which was posted yesterday. It’s a 1993 non-turbo for $30,000. Turbo versions have been known to fetch even more money. What do you think? Would you pay this much to own a Toyota Supra?

Original Fast & Furious Supra Up For Auction. How Much Will It Go For?