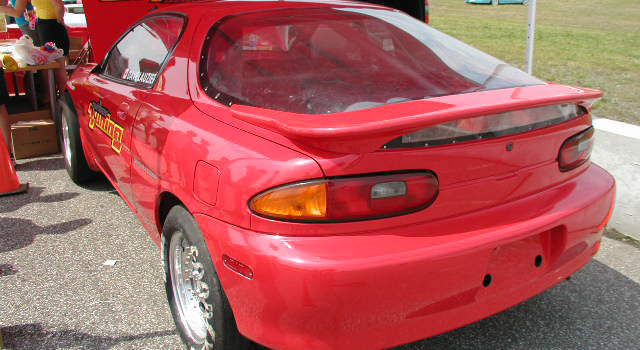 Dave Lauzier was one of the first people in Quebec to build a front-wheel drive drag car. His 350 horsepower Mazda MX-3 Precidia was made famous by an article in the March 1998 issue of Sport Compact Car magazine. Here is a snippet:

The MX-3 was powered by a 1.8 Litre 24 Valve V6 when Dave purchased it, but that didn’t do. The current engine block of this MX-3 is from a Protege GT, which was wrecked at 5000 miles. Since the block of the Protege GT is very similar to the 323 GTR engine, Dave ordered the remainder of the parts he needed from Rod Millen and built his own custom GTR engine.

A GTR exhaust manifold and Turbo were bolted on. Exhaust gas exited via a 3 inch custom made exhaust with a Dynomax Super-Turbo muffler. Intercoolers were also installed, being borrowed from the 323 GTR. A Centerforce dual-friction disc clutch was installed, and the Protege GT tranny. With 550cc fuel injectors and an MSD inline fuel pump delivering fuel to the combustion chambers, some heavy spark was needed. A Crane HI-6 ignition amplifier was installed. Add a nitrous system with a 40-shot and you can bet this MX-3 will be pulling across the whole RPM band.