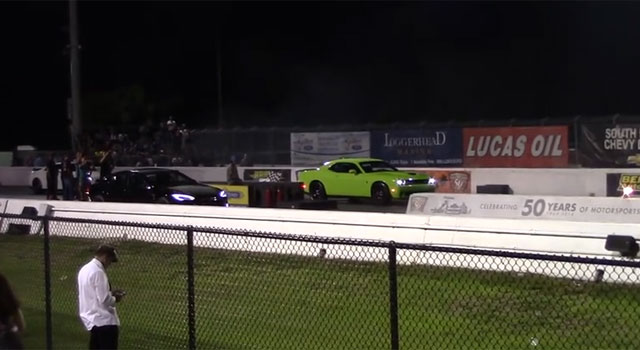 The owner of the Challenger had previously lost a similar race a few months back before he learned how to launch his car. Since then, he purchased drag radials for the Hellcat & practiced like crazy for the inevitable rematch.

From Hellcat.org: It happened tonight , but first off I want to take my hat off to the Tesla driver ! He went out of his way to get his cars up to the track tonight with really nothing to gain , much respect! In essence , we are both car fans and share a fondness for fast cars ! It doesn’t matter if those cars are American or Foriegn , gas or electric ! In the end it’s really just about people having fun and enjoying thier cars , and that’s what we did tonight ! I believe we left the track as friends ! I have no video and am going to leave you all in suspense ! I’m sure a video will surface somewhere as there we’re thousands of spectators ! I’ll leave you all with this , you won’t be disappointed !

His first attempt didn’t’ go so well. Read more about it again on Hellcat.org

My Wife Want’s a Hellcat