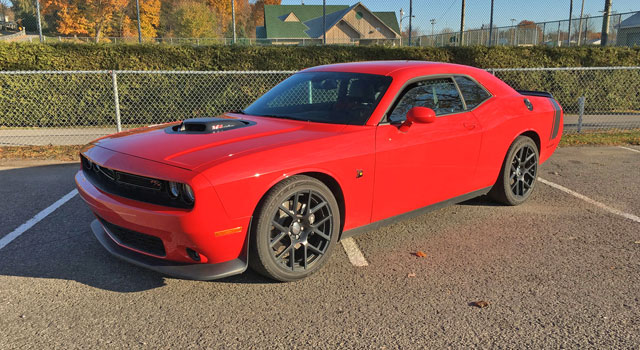 I can’t think of an intelligent, classy way to start this review so I’m going to just go ahead and get it out there: Holy crap is this thing fast!

No, the 2015 2015 Dodge Challenger Scat Pack isn’t the famous Hellcat but much to my pleasure, everyone thought it was. Dodge has eight – count ‘em – 8 different trims for the Challenger this year and it’s difficult to keep track of them. The Dodge website is probably the best pace to learn about them all but here is a brief summary:

SXT Plus: Starts at $33,995 with the same motor as the SXT and adds leather, bigger wheels and other luxury amenities.

Scat Pack: You now have the 6.4L SRT HEMI delivering 485 horsepower and 475 lb-ft of torque under the hood but you have cloth seats, halogen headlamps and some performance badges at a hefty $46,995.

Scat Pack Shaker: My test vehicle and the best bang for the buck in my opinion. At $49,995 it looks the meanest out of all the models with the hood scoop, 392 HEMI badge, black trim, black striping and 20-inch mesh wheels. It’s also louder than you’d expect and will bother your neighbors!

SRT 392: Starts at $52,995 with the same motor and power output as the Scat Pack models but now you have a functional hood scoop, Brembo brakes, adaptive steering damping and a Harmon/Kardon amplifier-powered sound system with 18 speakers.

SRT Hellcat: The holy grail of performance production cars and a price tag of $71,890 to go with it. Under hood is a 6.2L Supercharged HEMI Hellcat V8 delivering 707 hp and 650 lb-ft of torque that will propel you to a ¼ mile time in the low 11s and maybe even the high 10s with drag radials.

The Skat Pack Shaker was a head-turner everywhere I drove. Construction workers stopped what they were doing to give a thumbs up, teenagers riding their bicycles all pointed and even mothers at the daycare were thoroughly impressed with this modern incarnation of the muscle cars from the 60s.

The interior is comfortable and the controls are reasonably placed but temper your expectations if you think you can haul the family around with ease. I tried and it was difficult. Visibility sucks, the seats barely move forward enough to squeeze a child seat behind them and the doors are heavy as lead.

All of those minor issues are forgotten once you turn the ignition on, however. The deep, loud rumble of the exhaust will bring a smile to your face.

Driving around town didn’t seem sufficient to test the power provided by the HEMI engine but you can still get a good feel while remaining safe. Weather I was accelerating from 0-50km/h or from 80-100km/h, there was just so much power to spare. Thank goodness for traction control because without it, the car would be a hazard to anyone near it even during normal driving. I should note that I had the manual transmission (much to my enjoyment). It’s the perfect vehicle for drag racing.

Chrysler has made huge improvements to their Uconnect infotainment system over the past few years. My 2011 Caravan’s system is so bad its borderline unusable but that’s been corrected. This vehicle was a breeze to connect my phone with or browse the satellite radio thanks to a massive touch screen in the dash.

There were some things that consistently got on my nerves. The foot pedal parking brake was always awkward to operate in conjunction with the clutch. The release handle is also placed right below the hood latch, causing me to mistakenly pop the hood many times. The heated seats and steering wheel were a little too warm even on the lowest setting and had to be shut off. Finally, the window buttons and indicator controls were just out of reach from my driving position and could use better placement. Minor details matter to me if I’m going to drop $50K on a vehicle.

Fuel consumption was about what I expected – bad. But let’s face it – you’re not buying this car to save on fuel so it’s almost a non-issue.  My father in law owns the SXT V6 and he raves about how fuel efficient it is so if you don’t want to break the bank every time you visit the gas station I suggest you opt for that model.

The Challenger Scat Pack is American Muscle in its rawest form – loud, excessive and probably even offensive to some. In the emissions-conscious age where manufacturers are turning to turbocharged four bangers and hybrid electric motors to save every last drop of fuel, traditionalists will be happy to know they can opt out of all that in favor of a reincarnation from the good old days.

Correction: An earlier version of the article stated that the heated seats and steering wheel came on by themselves all the time. This was due to my ignorance about the settings. Naturally the option to specify if you want them to come on or not exists.