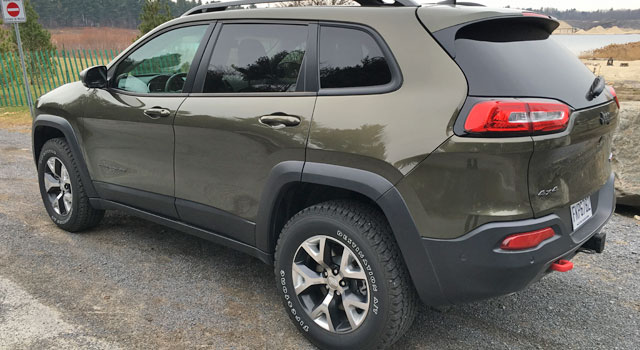 Introduced in 2014 to replace the outgoing Jeep Liberty, the new Jeep Cherokee made headlines for one of the most unique designs a mainstream automaker had put to market. I was excited to start writing this review because I’ve never had such a strong initial reaction after seeing a new vehicle as I did after seeing the new Jeep Cherokee for the first time. It’s not that my reaction to the new look was negative but rather more of a surprise that Jeep would go out on such a limb with the styling.

Let’s face it though – it’s unlikely many people who lay eyes on the Cherokee for the first time thought “hey that looks amazing”. The front end just looks upside-down which an awkward grille position starting almost above the headlights. It’s clear Jeep was taking a huge risk with this design and I love a manufacturer that is willing to take a risk.

Aside from the front, the rest of the Jeep Cherokeee looks fresh, modern and most importantly for a Jeep: rugged.  This top-of-the-line Trailhawk trim in particular gets extra points in ruggedness for the dual red tow hooks up front & one in the rear, skid plate trim also in the rear, 17-inch off-road aluminum wheels and of course the Trail Rated insignia. In order to get “Trail Rated”, Jeep puts the vehicles through a testing ground on the world famous Rubicon Trail. You can learn more about this on their website.

Under the hood you have the option of a 2.4L Tigershark inline 4-cylinder engine or a 271-horsepower 3.2-litre Pentastar VVT V6 engine with stop/start technology. My tester came with the latter and had about the right amount power for my liking which makes me wonder about the 2.4-litre and if it would be enough. The 9-speed automatic transmission performed extremely well and despite this being an offroad model, the ride was not overly harsh.

If parts of the exterior are questionable the interior of the Cherokee makes up for it and more. Jeep has done an excellent job with the layout, ergonomics and overall visual appeal on the inside. Chrysler’s Uconnect infotainment system is also among the most user-friendly in the industry. The seats are extremely comfortable as is the steering wheel. I found the back seats to have adequate legroom and had no trouble seating three toddlers in booster seats.

The tester came with a myriad of equipment such as a remote starter, leather seats, panoramic sunroof, intelligent cruise control, heated and air conditioned front seats, a heated steering wheel, backup camera, lane keep assist and Selec-Speed control with Hill Ascent and Hill Descent Control. Obviously we would have loved to offroad this sucker but that is beyond the scope of the review.

I have to say that I didn’t think I’d get used to the look of the new Cherokee but after strong sales and seeing so many of them on the road I’ve grown accustomed to it. It’s abundantly clear that many others have as well. After driving the Cherokee Trailhawk I would absolutely recommend it to anyone in the market for an SUV (and not just Jeep fans).

The 2016 Cherokee Trailhawk starts at $33,195 and tops out around $40K once all the afore-mentioned goodies are added.