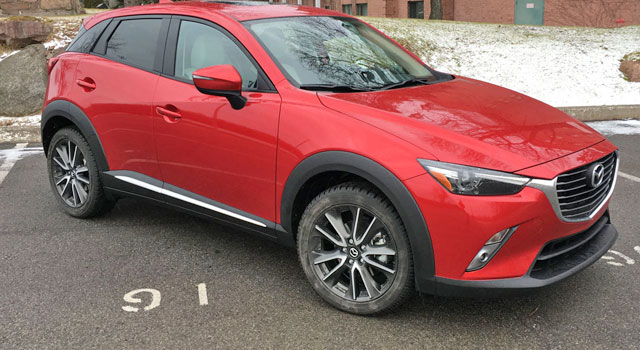 Part of my daily grind involves reading and moderating the MontrealRacing discussion forum and I often hear the young enthusiasts voicing their displeasure at the crossover fad that has overwhelmed the auto industry. Many see crossovers as nothing more than jazzed up cars made to appeal to people who like the idea of thinking they’re driving a “truck” when in fact they aren’t.

Call me fake or whatever you want but I find that jacking up a car, adding beefier fender flares, bigger wheels and complimenting that with available all-wheel-drive makes everything more interesting. I also like that these features were designed in the factory and not by some third party.

The CX3 is one of the latest incarnations of what I just described and is based off the Mazda3. Mazda made sure to tweak the look enough so that the CX3 can’t just be considered raised Mazda3 with available all-wheel-drive.  It clearly has an identity for itself in the Mazda lineup and represents the fifth offering from the manufacturer of its next-generation set of vehicles.

A Beauty Both Inside And Out

The exterior of the CX3 is stunning with bold and aggressive styling. The headlights and sleeker and meaner as are the fog lights. The front chin spoiler has a decisively “truck” look to it. The fenders are big and pronounced as is the rear bumper which protrudes a little compared to the Mazda3. Add all these together and this vehicle can check the “looks rugged” box without issue.

The interior of the CX3 is almost a carbon copy of the 3. It’s a beautiful design and leads the segment in both look and feel. These entry-level crossovers often have interiors that are stripped down and baron but this isn’t an issue here as you can see from the photos. My CX3 GT with the tech package came with white leather-trimmed seats, a leather steering wheel, leather shift knob and leather trim on the dash. The Mazda infotainment system is very intuitive and easy to operate as are all the heating controls.

The back seat is, as you might expect, a little tight. In the end, this is a sub-compact crossover so if you require accommodations similar to a Cadillac Escalade you need to look elsewhere.  Mazda has done as good of a job as it could, given the vehicle’s small exterior dimensions.

Operating the CX3 was a pleasure. The small size and low center of gravity on the crossover mean handling that’s as good as any car. Steering is precise, braking is good and acceleration is decent but not outstanding. Mazda has opted not to make the 2.4-litre motor from the Mazda3 available in the CX3 so we’re stuck with the 146 horsepower 2.0-litre four-banger. It gets the job done but at times I felt it a bit lacking. The good news is that the competition isn’t much quicker so the CX3 isn’t out of the norm here.

An All Around Winner

Compared to the competition (and there is plenty) the Mazda CX3 offers the best looks and the best interior in my opinion. You’ll get great bang for the buck no matter which trim level and this vehicle is a must-drive for anyone seriously purchasing a small crossover.