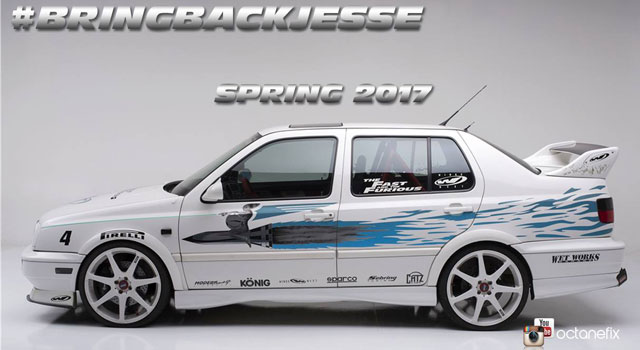 Dominic Dubreuil, the owner of Octanefix.com and the Paul Walker Memorial Ride is ready to embark on a new project to re-create the Volkswagen Jetta used by the character Jesse in the movie The Fast & Furious. We’ll let Dom explain in his own words:

This is a huge projet i’m currently working on. After all the exposure my Fast and Furious Eclipse had on social networks such as Facebook or Instagram and the motivation Chad Lindberg (Jesse) gave me lately, I’m almost ready to start this project.

This time since I’ve got no deadline for this car, we have the time to film this build and turn it into a web series. Whether it’s hunting screen accurate car parts on the internet or building the actual car, you’ll see everything and be able to follow the whole build from start to finish.

Since the people working on the car speaks French and English, we’ll had subtitles to make sure everyone will understand.

Partners like Modernimage Sd and L’as de la carrosserie will come back and work on this car too and new ones like Plaza Performance and many others will join us.

If you’re a business and would like to join this project, you can contact me by email : ddubreuil@octanefix.com

Is This Paul Walker’s Replacement For The Next Fast & Furious?