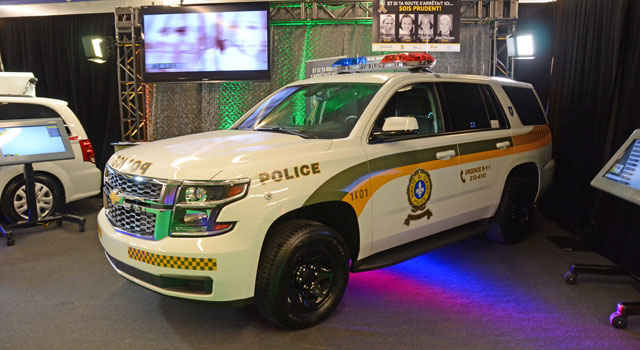 Many of us have trained ourselves to identify headlights of police vehicles in our rear view mirrors. The distinctive shape of the Ford Crown Victoria, Chevy Impala, Ford Taurus and Dodge Chargers usually give themselves away but now we have another model to worry about: The Chevy Tahoe.

The Surête du Quebec has recently added the latest generation (2015-present) Chevrolet Tahoe to its fleet of vehicles. The Tahoe will join the ranks of the more than 3000 vehicles in the fleet which includes automobiles, minivans, 4X4s, tactical vehicles, motorcycles, boats, quads, helicopters and a few others. The vehicles will likely be used in remote communities rather than big cities, however.

You can catch one parked beside a photo radar-equipped Dodge Caravan at the Montreal International Autoshow at Palais des Congrès which finishes this weekend.

Vote for your favourite vehicle in the performance zone at the Montreal Auto Show.