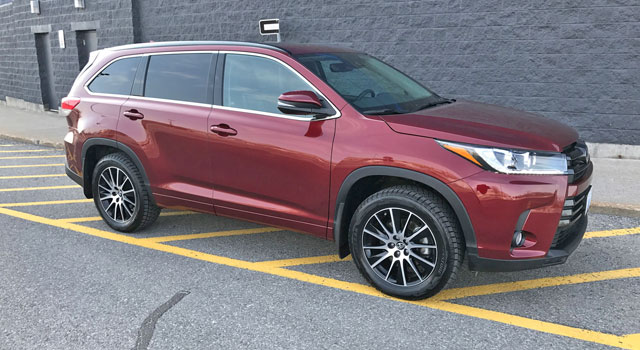 The Toyota Highlander returns for 2017 – its fourth year of this generation – with many notable improvements to speak of. The Highlander was already a very good product and if you have been in the market for a mid-sized SUV or crossover to fit the entire family, it was likely at the top of your list for a test drive. A longtime stalwart of the industry, the Highlander has long been among the vehicles you can’t really go wrong with thanks to Toyota’s reputation for quality and comfort.

Performance has been enhanced for this year with the addition of a new 3.5-litre V6 motor making 295 horsepower. This power plant is available on all Highlander gas models and standard on all hybrid versions. The new motor comes mated to a new Direct Shift 8-speed automatic transmission (except for hybrid models which receive a CVT) and is a welcome improvement over the rather sluggish unit from the prior years. The new transmission is more compact and noticeably smoother. If a four banger is all that you need, you’ll be out of luck because the base 2.7-litre 4- cylinder isn’t available in Canada.

More spacious than the smaller RAV4 and more tame than the rugged 4Runner, the Highlander is a plausible alternative to people wishing to stay away from the dreaded minivan. Depending on the configuration, there is the possibility of seating up to eight passengers like most minivans. The front row is always a pair of bucket seats. The third row can squeeze three and the middle row has the option of either captain’s chairs or a bench with two and three spots respectively. Let’s not be under any illusion that the third row can seat three adults with any sort of comfort but children are more often than not the destined occupants there.

The middle row will slide forward to provide easier access to the third row but having the bench definitely adds slightly more difficultly in accomplishing this. Having just tested the Pilot I have to say the Highlander’s folding bench was a tad more difficult to operate.

Comfort-wise the seating is very good and you won’t have any problems on long trips. The cabin is adorned with high-quality material that feels good to the touch including soft leather and brushed aluminum in this test vehicle. Interior ergonomics are similarly very good however the design of the cluster and climate controls is getting dated and some of the buttons didn’t feel up to the usual Toyota quality. The touch screen infotainment system isn’t my favorite but it’s not bad and gets the job done.

Toyota has made some noticeable improvements to the exterior of the Highlander for 2017. A new upper and lower front grille design is in place for all trim levels which is beefier and stands out more. In fact each level will have a unique grille to identify it. The vehicle also receives three new exterior colors, including Celestial Silver Metallic, Toasted Walnut Pearl, and, exclusively on the new SE, Salsa Red Pearl. Overall Toyota has done an excellent job with the Highlander’s exterior styling, moving away from the crossover end of the spectrum and more towards the SUV side.

This Highlander is quite agile and the electric power steering is nice and firm. Toyota had re-tuned the front and rear suspensions compared to the previous generation which had a fair amount of body roll but that’s no longer an issue here.

Keeping the family safe are eight airbags inside the vehicle as well as numerous other available safety features such as a pre-collision warning system, blind spot monitoring, lane departure warning, parking sensors, adaptive cruise control and a standard rear-view camera.

You can get into a base V6 Highlander LE with front-wheel drive for $37,784. If you need AWD the price bumps to $40,279 and with the convenience package which includes a leather steering wheel, leather shift knob, power tailgate, three-zone climate control, heated front seats, keyless entry, an 8” display and a few other options you’re looking at about $43,684.

After a week with the Highlander karting the family around I wasn’t so sure I’d be ready to ditch my minivan for it. Perhaps I had one too many children (I have three) but getting in and out multiple times per day was a little bit too work intensive than I would have liked. One thing that would really make a difference for someone like me would be to have the middle row fold into the floor as we see on minivans. I don’t see a good reason why this technology hasn’t been adapted to SUVs yet because it would free up a heck of a lot of space while making greater ease of access for the third row.

As I said in my intro, you can’t really go wrong with the Highlander. It’s a quality piece of machinery that will last and retain excellent resale value. For a family of four it’s perfect but five or greater might still want to consider that minivan.