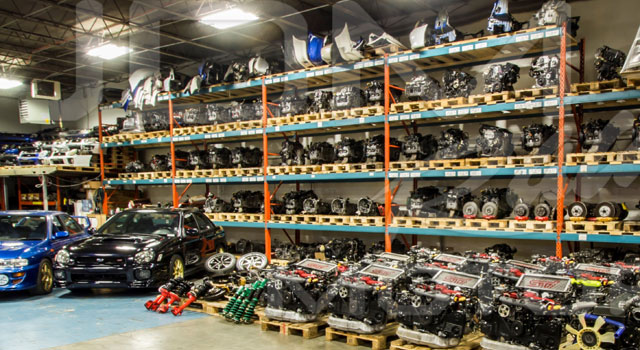 Ever since the government banned registering right-hand drive vehicles in Quebec about eight years ago, JDM importers have had a tough run. Prior to the ban, business was booming and shipments of cars and of parts were pouring in.

Montreal is a North American hub for this activity with dozens of shops located in the eastern part of the city. Over a three block radius in St-Leonard just East of boul Langelier there are no less than nine different shops. These are the shops that have fought through the ban that has affected so many importers over the years.

One of these shops is longtime MotrealRacing.com sponsor JDM Racing Motors. I visited the shop a few days ago and spoke to Wali, about how he was able to weather the storm along with his thoughts on how it has affected the local JDM market.

Wali explained that his focus has shifted toward exporting parts to the USA and that the goal has been  to broaden the company’s reach and constantly find ways to adapt going forward.

“In order to adapt to the changing environment you have to look for way to diversify your business. The 2009 ruling was unfortunate for us but it looks like it’s here to stay so we have no choice but to cope with it”, Wali said.

JDM Racing Motors has earned a name for itself by specializing in the Subaru brand. They have established their position as one of the best in the import business and have a lot of well-deserved respect in the Subaru community in particular. This fact has helped them be the go-to Subaru guys across North America especially for the EJ205 WRX engine and the EJ207 STi motor.

What does the future hold for shops like JDM Racing Motors? It’s possible the Quebec government might overturn the ruling and let people registers right-hand drive vehicles again. Should that happen, business would certainly pick up.

If not, Wali is content with his reach in North America and is more than happy exporting internationally as they currently do while catering to their Montreal clientele.

For more information on the shop please visit www.jdmracingmotors.com

This is a sponsored article