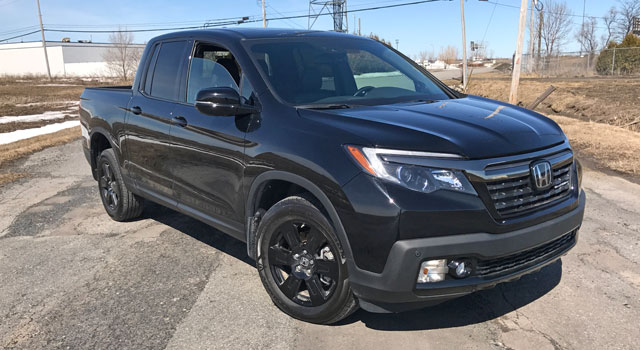 Honda’s bid in the pickup truck game just went up a few notches with the totally redesigned and improved 2017 Ridgeline.  Now in its second generation, the Ridgeline has steadily improved to the point where it should be a must-try for anyone in the market for a pickup – full size or otherwise.

That may be a bold statement because the Ridgeline probably never enters into contention from the swath of buyers who stick to full size options. We need to ask ourselves why is this? It’s definitely true that the Ridgeline isn’t designed to match the capabilities of these full size workhorses but it’s also true that the vast majority of pickup buyers don’t use their trucks to their full capabilities. If your work takes you way off the beat & path deep into the forest, desert or the snow then the Ridgline probably won’t be very useful to you. But you stick to urban areas and want the added capability of a pickup, the Ridgeline is an impressive option.

Let’s get right to the numbers: we have a class-leading maximum 1,584 pound (718.5 kg) payload capacity (which varies by trim) and up to 5,000-pound (2,268 kg) towing. Again, this doesn’t compare with full size pickups but is still fairly robust. With its unibody construction, fully independent front and rear suspension systems, the Ridgeline offers vastly superior ride comfort and handling precision compared to conventional body-on-frame truck offerings. In a nutshell, it feels like you’re driving a Honda Pilot. For the times when you aren’t towing or hauling anything this is exactly what the doctor ordered.

Under the hood is Honda’s 3.5-liter i-VTECV-6 engine mated to a 6-speed automatic transmission. Output is rated at 280 horsepower and and 262 lb-ft of torque. For added fuel economy, three cylinders are shut down under light throttle load. You can opt for front-wheel drive only or the all-wheel drive version which is capable of transferring up to 70 per cent of the power to the rear wheels if necessary. Available torque vectoring, plus Normal, Snow and Mud and Snow drive modes help ensure you don’t get struck in your mild-duty off-road adventures. All models also come standard with a Class III towing hitch and AWD modes add a 7-pin wiring connector.

As you can probably imagine, the interior of the Ridgeline is very similar to the Pilot. What I really appreciated was the traditional gear shifter as opposed to the Pilot’s new age push button controls. The layout is highly functional and ergonomically excellent. My tester what the top-of-the-line Black Edition which comes with black leather with red contrast stitching, red ambient lighting, black 18” wheels and blacked out various exterior body parts. The Ridgeline’s 60/40-split and folding rear seat offers roomy seating for up to three passengers and, with the seat bottoms folded up, has the capacity to carry bulky items.

Honda’s infotainment system needs a little work because it falls short of the usability of most other systems. The interface is cluttered unintuitive and takes time to learn. The biggest problem is actually the lack of a volume knob. Honda has opted for a tiny volume control button next to the touch screen surface that requires effort and concentration to hit it with your finger because it’s so small. For something that gets used more than any other button, this desperately needs to be changed.

Moving onto the exterior we have a front end that is copy/pasted from Pilot and vastly better looking compared to the previous generation. For some reason, the old Ridgeline never looked quite right to me but that problem is now gone. I had at least a half dozen strangers comment positively on the Ridgeline in the week I had it – almost more than some of the more fancy vehicles I’ve had the pleasure of testing. Also available are new premium features including standard LED taillights, and available features such as LED projector headlights and LED daytime running lights.

The 2017 Ridgeline’s new glass fiber-reinforced SMC composite bed is longer (+3.9 inches, or 100 mm) and wider (+5.5 inches, or 140 mm) than in the previous model and is the only bed in the midsize class that can flat haul 4-foot-wide items, such as drywall or plywood panels on the floor between the wheel wells. It also does not require a bed liner like conventional steel beds. The new Ridgeline bed also boasts an in-bed trunk with fully flat floor, and available world’s first Truck Bed Audio System, perfect for tailgating or loitering in parking lots.

I just so happened to need to move a washer/dryer on the week that I had it. The two items fit perfectly side by side in the bed as you can see. I also had to move a double mattress and a few other items and I was pleased at how the Ridgeline helped me accomplish everything I wanted even while hauling my family around in complete comfort and achieving a fuel consumption of 11.5L/100km.

When I test full size pickups for hauling the family around, the usual gripes I have are that they suck gas like crazy, are harder to park and drive a bit rough. The Ridgeline shares none of these problems and offers all the functionality I need. Sure it would be cool to have a massive pickup but it’s hard to argue against the efficiency that the Ridgeline provides. It’s a fantastic product that will likely lure both SUV buyers and full-size pickup buyers into its realm.