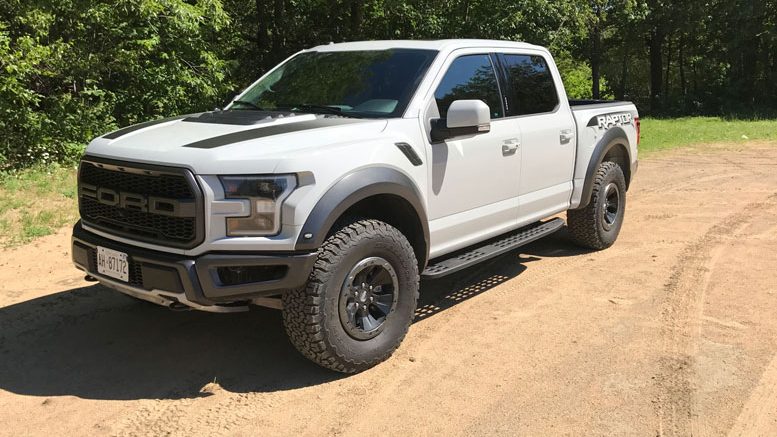 After a hiatus of a couple of years while the new F-150 was being brought to market, Ford’s ultimate off-road monster is back for 2017 and more insane than ever.

Let’s start with the basics. Gone is the old 411 horsepower 6.4L V8 in favor of Ford’s new twin-turbo 3.5-litre V6 Ecoboost tuned to deliver a whopping 450 horsepower and 510 pound-feet of torque. It’s impressive considering it has just under half the displacement but all that turbocharged awesomeness has made up for it. The high-output 3.5-liter EcoBoost is Raptor exclusive in the F-150 lineup and is paired with an all-new 10-speed transmission for improved efficiency. Yes that’s ten speeds – double what most people are used to. Yet with all those gears, the drive is smooth as can be without any hesitation or struggle to find the right one. When I pressed on the gas, the Raptor did what I wanted, when I wanted.

The new F-150’s aluminum-based construction sheds more than 500 pounds compared to the previous Raptor. That’s not chump change at all.  Couple it with the added power boost and what was already a mean beast is now an even meaner beast. This adjective can also be applied to its size which is, needless to say, massive.  The SuperCrew test vehicle had a wheelbase of 12 feet and measures 19 feet long plus nearly 7 feet wide. It makes urban daily driving in the city a small challenge, especially in those tight supermarket parking spaces. I had the fortune of helping someone move out of a downtown condominium but still managed to squeeze the Raptor into the underground parking (just).

Chances are that if you’re thinking about buying a Raptor you probably do some off-roading now and then. The vehicle was, after all, developed from Baja racing in the grueling Mexican dessert. Ford entered this version of the Raptor in the 2016 Baja 1000, finished the race and drove it home on the street which was quite a feat.

There are six different drive modes to help tackle almost any kind of terrain. The most interesting is Baja mode which puts the truck into four-wheel drive with torque evenly split between front and rear. To make sure the turbo is always spooled, Ford employs an antilag feature to achieve this even when you’re not pushing the engine hard. Additionally the transmission will make use only of gears 1-5 which also aids in keeping the turbo spooled by keeping the motor revving high. If you desire only rear wheel power there is an override feature to accomplish this.

For muddy/sandy situations the Raptor splits torque 50/50 in four-wheel drive. Traction control is disabled and the engine revs higher which is ideal for getting out of trouble.

If climbing mountains is your thing, Rock mode locks the rear differential and uses 4-Low with a 50:1 crawl ratio.

Next is Weather mode which utilizes the transfer case to simulate all-wheel drive. Whenever there is a loss of traction, power is automatically diverted to the needy area. In this mode the truck makes full use of the traction control system to allow for minimum slippage.

I found myself using either Sport or Normal mode for my timid travel between home and the daycare. Normal uses the auto start/stop function that we all love to hate in order to save fuel at red lights. Sport mode improves the already-decent throttle response but it almost the same to be honest.

The exterior of the Raptor is loud and unforgettable. Wider and taller than a standard F-150, the Raptor comes with flashy graphics, BF Goodrich KO2 35-inch tires, a unique front facia with the signature three LED grille lights, side marker LED lights and flared fenders. Basically everything you need to make a truck look as badass as possible.

The interior pampers you with as much luxury as the top of the line F-150s with premium leather seating, leather steering wheel, reptile-skin trim and aircraft-style auxiliary switches on the roof for any extras such as light bars and other aftermarket goodies.

Driving the Raptor felt like I had a big loud speaker in front of my face and I was yelling “hey look at me!” Not that I minded or anything but those who are attention averse might want to steer clear. I received many looks from other envious pickup owners, evidently in awe of the new machine. But for all the power and off-road capability, the truck was pleasant to daily drive being smooth enough at highway speeds as any other F-150.

Owning one will set you back a pretty penny, however, as the 2017 Raptor starts at $72,299. It may be pricey but there’s a lot of technology here to give you an incredible off-roading powerhouse that is really in a class of its own.