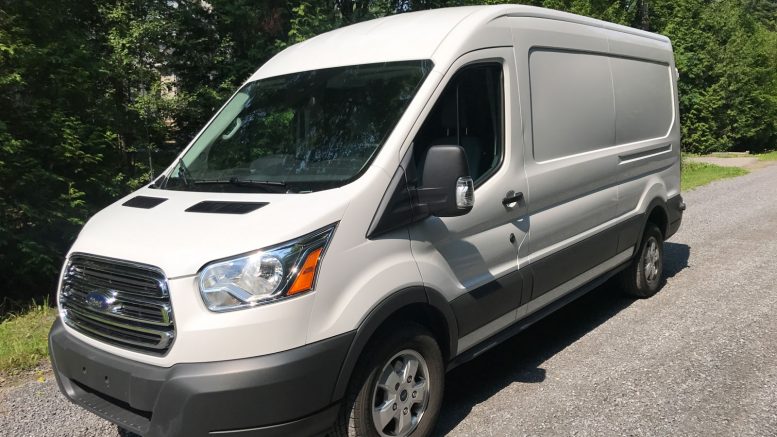 Introduced in North America as a replacement to the Ford E-Series (also known as the Econoline) in 2015, the Ford Transit improves on the old product by leaps and bounds. Unlike the E-series which was a traditional body-on-frame truck-like design, the new Transit is a unibody construction which means it’s constructed more like an SUV. The Mercedes-Benz Sprinter and RAM Promaster are of similar design while GM and Nissan still retain their truck roots.

There are a variety of configurations for the transit including low, medium and high roof, regular, long and extended length, passenger or cargo configuration..the list goes on. I had the fortune of being able to test the 2017 Transit with the long body and medium roof. It’s the perfect middle of the road balance in my opinion. Under the hood was the optional $5995 3.2-litre inline 5-cylinder Power Stroke turbo diesel motor making 185 horsepower and 350 lb.-ft. of torque. It was plenty quick even when fully loaded with furniture however if you need more performance Ford’s 3.6-litre Ecoboost V6 makes a whopping 365 horsepower and 420 lb-ft of torque. 0-100km/h acceleration times for the Ecoboost have been reported in the sub 7-second range which would give many cars a run for their money. Max payload is rated at 3,330 pounds and towing at 5400 pounds. If you’d rather save some money, you can keep the base 275 horsepower 3.7-liter V-6.  My fuel economy for the week was a higher-than-expected 12.5 L / 100 km.

The cockpit offers good comfort and is very functional with great visibility. You can get the basic AM/FM stereo or upgrade to a CD player for $350 (in case you think it’s 1995), CD player with satellite capability ($550), SYNC for $1100 or the full SYNC 3 with navigation for $2200 including 6.5-inch LCD touch-screen. Controls were all within reach and there were plenty of cup holders and areas to hold your junk.

It also just happens that I had to move the week I booked this van for road test so it was going to get a full workout. It’s just as well because the movers I had hired severely underestimated the size truck I required and the Transit (which I thought would be nice to have for odds and ends) became a critical part of the move. The rear doors open very wide and thank you to the designer who thought about putting door stops on the body because they were a necessity. The sliding door is on the passenger side only and you have the option of having no windows or privacy glass there and in the rear. The rear glass is nice to have for visibility, the side, not so much. I jam-packed the cavernous interior to the brim with all my junk and it took it like a champ.

Driving the Transit was similar a pleasure. I had tested the Promaster last year and didn’t find it to be the case. The Ford is on another level in terms of poise, stability and comfort. Highway cruising is easy which was my main concern coming into this review.  City driving is similarly effortless with the Transit’s visibility and maneuverability paying dividends. The one thing that did annoy me was how loud the backup sound it. BEEP BEEP BEEP. I felt bad leaving my house in the morning because I knew the neighbors three houses down would be woken up.

As I mentioned there are a plethora of options that can be had for the Transit. Playing around with the configurator online will allow you to build your Transit however you see fit. My Transit came in nicely-optioned out at $52,134. It’s a tad higher than similarly-equipped vans from GM or Nissan but the Ford really delivers so it should absolutely fit into consideration.