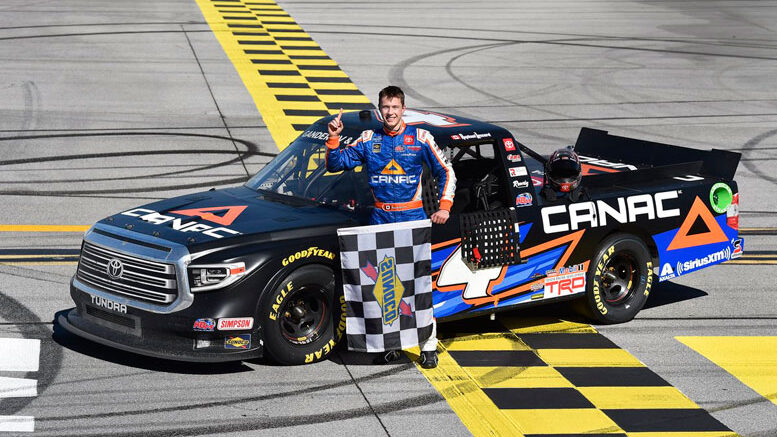 The NASCAR Truck Series at Talladega, Alabama, saw one of the most shocking results in recent memory. Canadian rookie Raphael Lessard, at just 19 years of age, walked away with the win in overtime.

In just his second superspeedway race ever, the Quebec native just above managed to fend off Trevor Bayne for his maiden win. He’s just the fifth foreign-born racer to reach the pinnacle of the NASCAR Truck series. For a kid who had not clinched a playoff berth and had made the top-10 just four times prior to his victory, this win is a true Cinderella story.

The Story of a Rookie

Raphael Lessard was born on July 5, 2001. At just 19, he’s still a rookie. He moved to the United States from his home in Quebec, Canada to focus on driving in January of 2020. He was never expected to win this race, but his promising career had its inception at a young age. When he was just 12 years old, he won his first race driving an old Honda Civic.

Lessard’s talent is perhaps not altogether surprising. Many of his family members have been involved in the sport, and Raphael was exposed to the wonders of the track from the cradle. It’s fair to say that racing is in the blood.

His father, François, was a successful racing car driver in his own right However, he saw the extent of his son’s potential early. He promptly decided to sell all of his own cars, using the additional time and money to invest in Raphael’s budding career.

Brett Moffitt. Matt Crafton. Sheldon Creed. Christian Eckes. All experienced drivers, each a top 4 favorite to win the NASCAR Truck Series. None walked away with the title, all finishing behind Raphael Lessard. And saying that’s a surprise is a huge understatement.

Lessard was a gigantic underdog going into the race. Let’s consider the numbers. Most bookies put him anywhere between 15-20 in terms of favorites. Most logged his odds at approximately +5000 the day before the race (put in $100, you get $5000). In other words, a near-guaranteed loser.

Those who actually put in a wager on Lessard to win this time must have their hearts pounding by the end of the race. Because no one could have expected the result, least of all the betting sites that had ridiculously long odds on Lessard to win.

However, he now took the crown at Truck SeriesHe, he also ranged 3rd at Daytona Road Course in August, hopefully, we will see him in soon at (what’s been said by many fans, punters and NASCAR betting sites to be) “The Great American Race” – Daytona 500. He would surely pump up the heart rate for many.

The Play-by-Play: How Lessard Won

The race was exciting right down to the end, with a two-lap overtime necessary to crown the winner. It went right to the wire, with Lessard neck and neck with Trevor Bayne on the very final lap of the race.

His win came through an official ruling, which came after caution was registered on the final lap. The caution was a result of a multi-truck crash, which destroyed hopes for highly-rated veterans including Christian Eckes.

While Lessard had a terrific race, Lady Luck was also on his side. Ben Rhodes pushed him into the lead just moments prior to the caution being waved, giving him the victory by the tiniest of margins.

The race had some other surprising performances, with Trevor Bayne’s second-place finish being his top performance since he joined the circuit in September. Codie Rohrbaugh had a solid finish at fifth, while Jordan Anderson registered his best race since coming in second at the season opener at Daytona.

Zane Smith, however, had a race to forget. The playoff driver was collected in a crash that occurred in Lap 13, eliminating a total of seven trucks. Lamenting he was just an innocent bystander, it ended his hopes of coming in first.

What Does the Future Hold?

Lessard’s win was impressive, but not quite enough for a Playoff berth. The promise of this driver, however, is clear for all to see. His aim for 2020 is to finish the season strong, setting himself up with a positive platform for next year.

Like with most drivers, garnering interest from sponsors is of primary importance for Lessard. Without new backing, it’s unsure whether he will be able to continue racing in the Trucks series next year. Based on his recent performance, it’s clear the track would be less exciting without him.