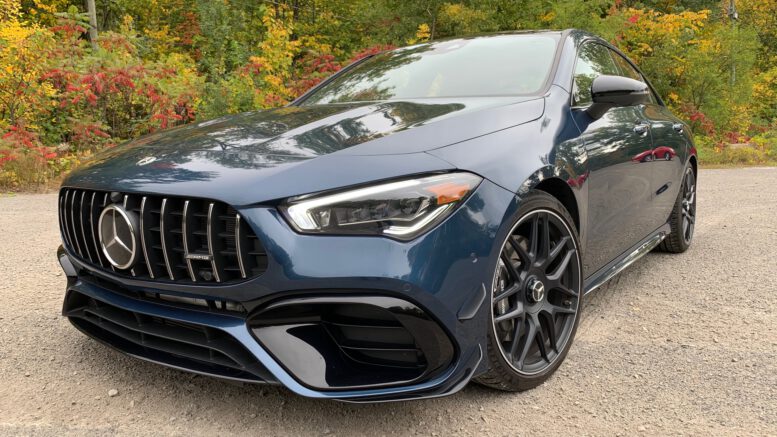 Mercedes introduced the CLA in 2013 as a way of getting more people behind the wheel of the German brand. At the time, the least expensive Mercedes was the C-Class which was still out of range for a large portion of young buyers. The CLA obtained the desired result for Mercedes and was a global success even while going head to the head with the Audi A3 and BMW 2 Series.

Since the CLA’s introduction, the smaller A-Class has taken over the reins as the entry-level offering. The CLA remains another affordable option and the second generation was unveiled in 2019 as a 2020 model and features an all-new revamped design.

The new design is decidedly more AMG than its predecessor. It’s almost as if you’re looking at a mini-AMG GT. The front end is very shark-like and the AMG grille with its wide lower contour and twelve vertical slats leaves no mistake that it’s a performance machine. The slim headlamps, massive front air inlets in the bumper and side slits for downforce round out the look up front. Viewed from the side, the wider AMG side skirts visually lower the CLA 45 so that it appears to hug the road more closely. The rear features a massive diffuser with quad exhaust tips. 19-inch lightweight wheels in a 5-twin-spoke design show off the massive AMG-branded calipers. 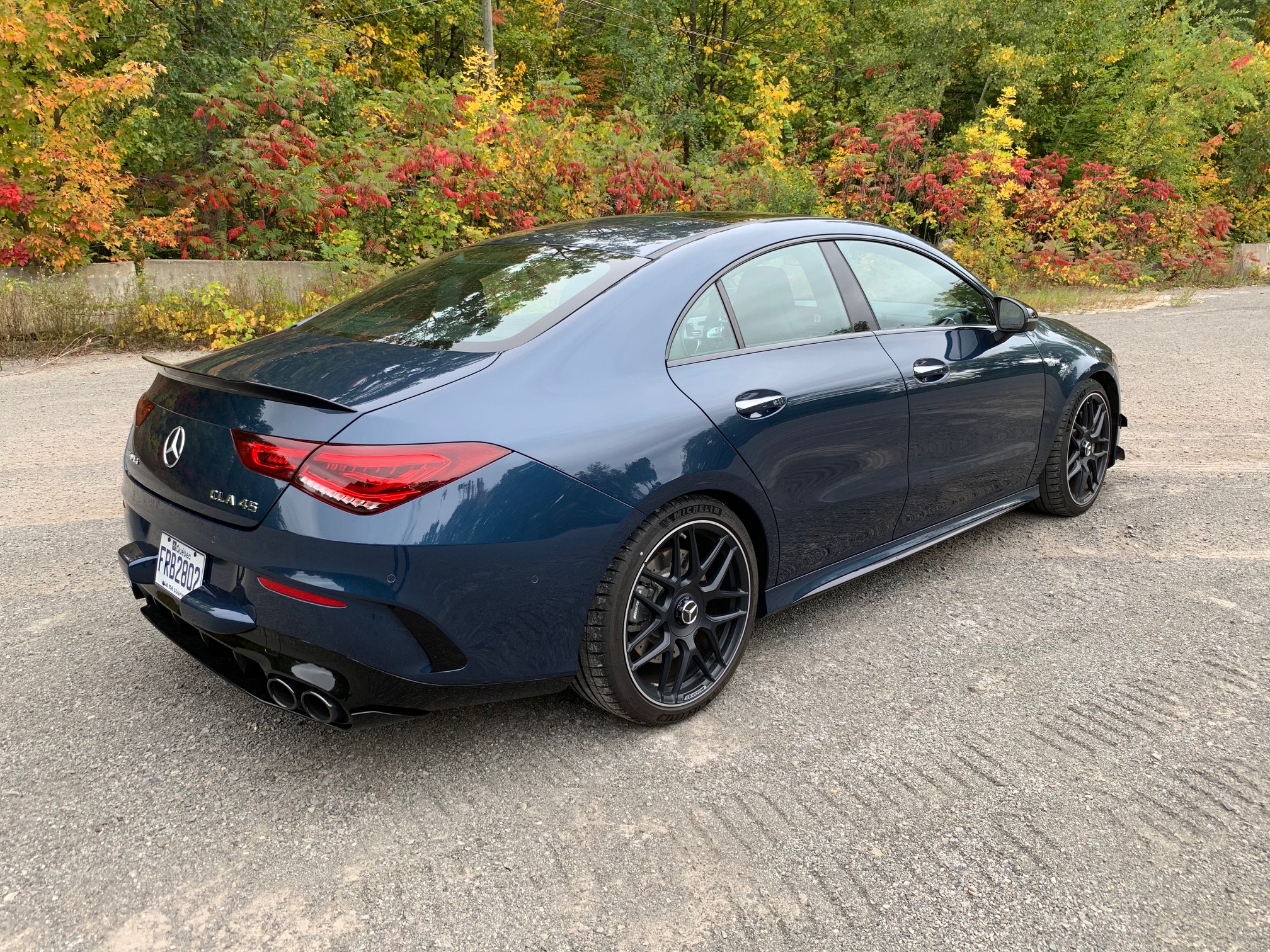 The CLA 45 turns heads but does it have the power to back it up? Mercedes made absolutely sure that was the case with the highest power output coming from a production four-cylinder in the world. The absolutely spectacular turbocharged 2.0-litre engine produces 382 horsepower and 354 lb-ft of torque. That power is sent to all four-wheels via an eight-speed automatic transmission.

Needless to say, the CLA 45 is just blisteringly fast. Switch into Sport Plus mode to get the full effect of this performance machine and the exhaust comes to life with a growl that will wake your neighbors. At wide open throttle each shift elicits a backfire from the exhaust but unlike the uncontrolled incessant rumbling from a BMW M Performance exhaust, the AMG backfires are refined and smooth. It’s addictive and dangerous because all you want to do is keep hearing the sound but you must be restrained on public roads for everyone’s safety. The CLA 45 can do 0-100 km/h in just 4.0 seconds.

There are plenty of other technological marvels on the CLA 45 that are sure to please the gearhead in anyone. Launch control allows the car to accelerate from a stop in the quickest possible way. If you have access to a track there is a drift mode you can go to town on. All of this is made possible by the AMG Torque Control System which can send power to just the rear wheels in required. 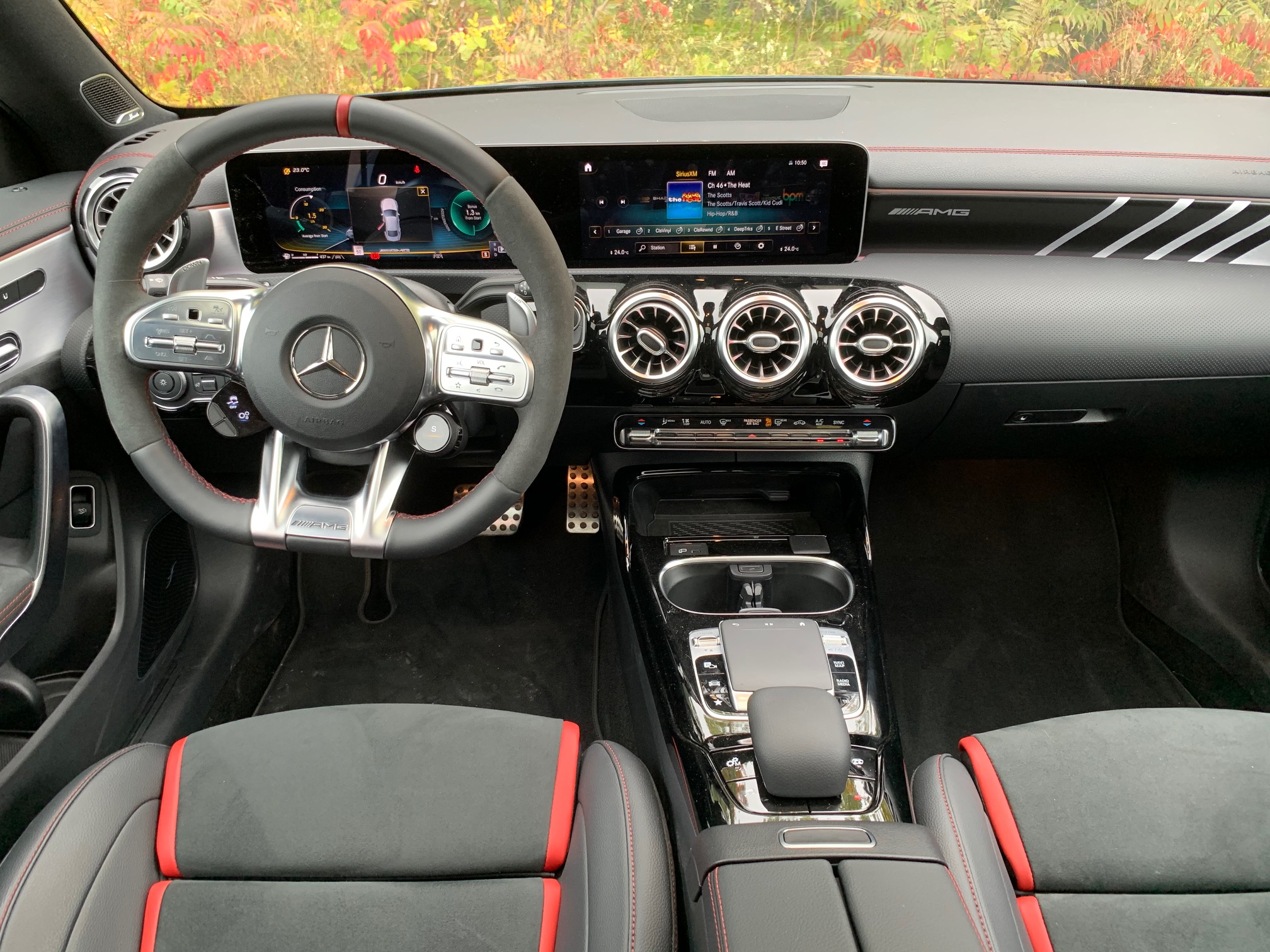 The CLA 45 has a cabin that will put just about any of its competitors to shame. To be honest there isn’t anything else much like it on the market and I mean that in a good way. You’d be forgiven if just looking at the photos you mistook it for another one of the higher-end Mercedes models.

The brushed aluminum vents and accent panels give it an all-round race feel. Mercedes’ flat-bottom leather and suede steering wheel is a gift for your hands. Behind the wheel sits a marvelous wide screen that stretches the length of most of the dashboard.

The displays are highly customizable through the trackpad-type interface that takes some getting used to. It’s nowhere near the abomination of Lexus’ trackpad and I was able to get comfortable enough with it by the end of my week with the vehicle that it didn’t bother me at all. My kids had a blast choosing which LED ambient lighting colors to display throughout the cabin (I’m not going to lie, I was just as excited as they were to play with the colors).

AMG sport bucket seats are firm as heck yet not uncomfortable to long drives. They also look amazing with red contrast sticking that matches the dash and steering wheel. Space is tight, unfortunately as this is smaller than the compact C-Class don’t forget.

You can get behind the wheel of a Mercedes-AMG CLA 45 for $59,200 but you’ll likely want to add some options which will inflate the price quite a bit. A fully-loaded version can top $80,000 which is a lot of coin but that’s what everyone says about these performance machines. That money will buy you the world’s most powerful production four-cylinder and in my opinion it’s worth every penny. 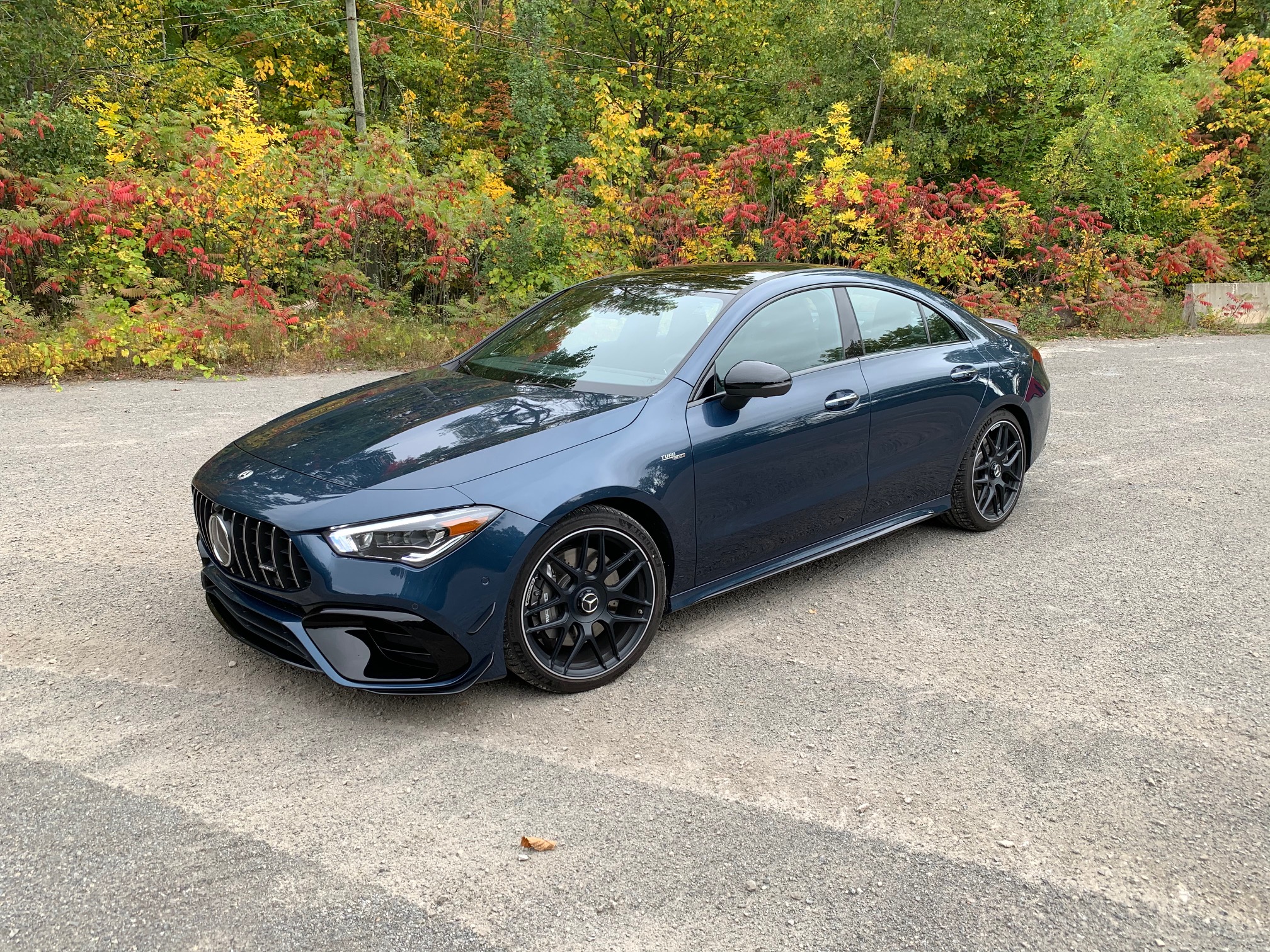 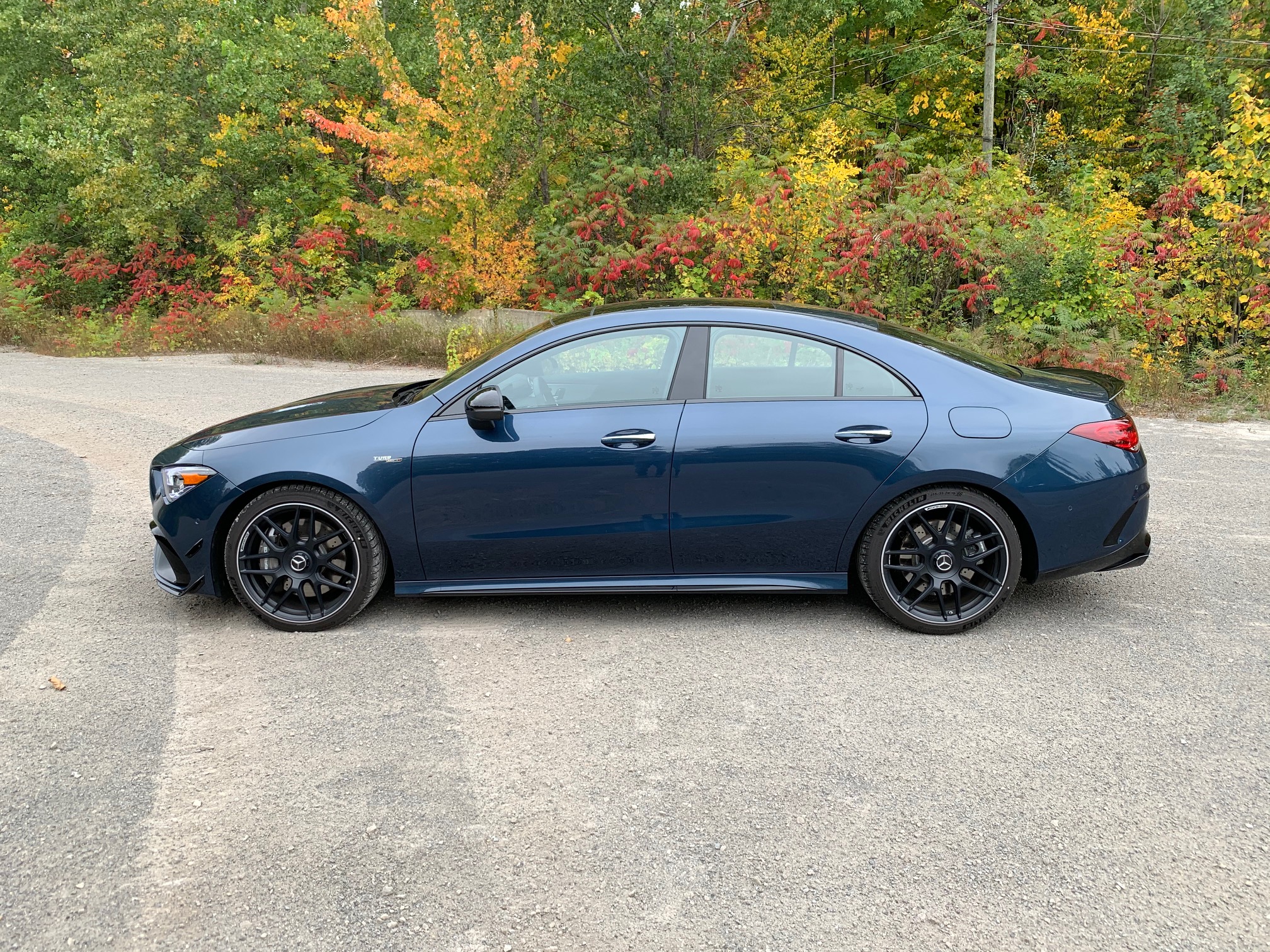 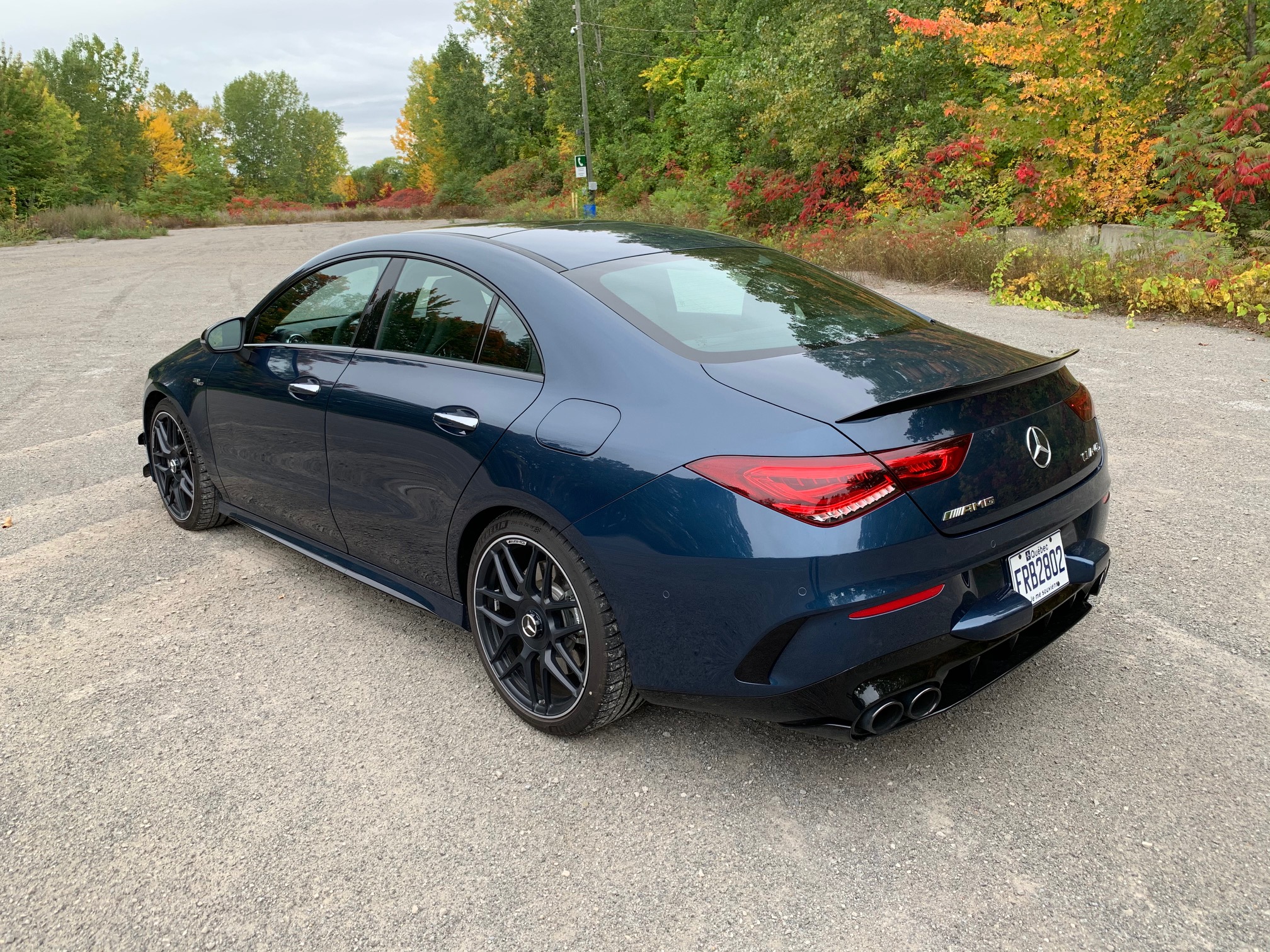 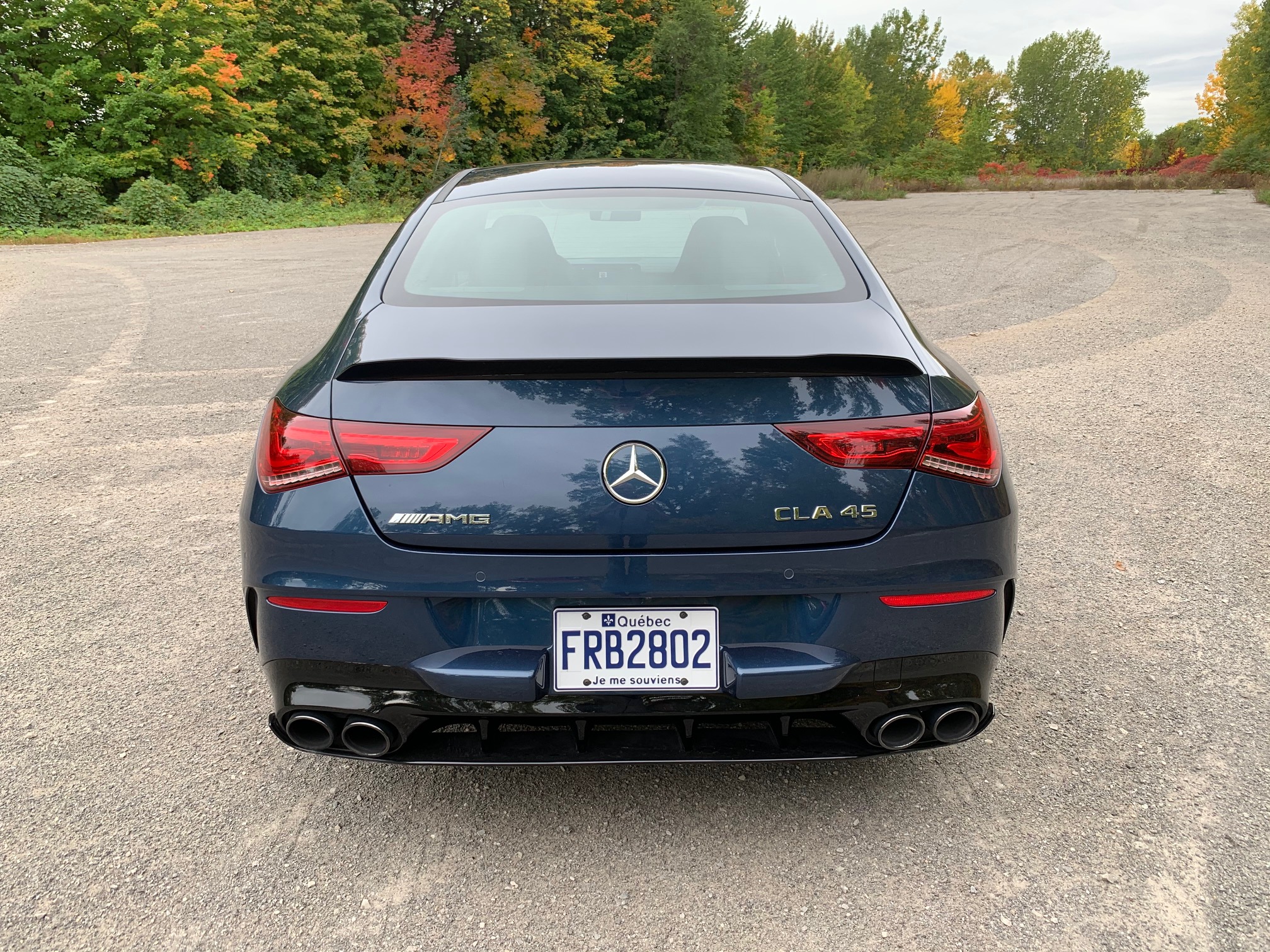 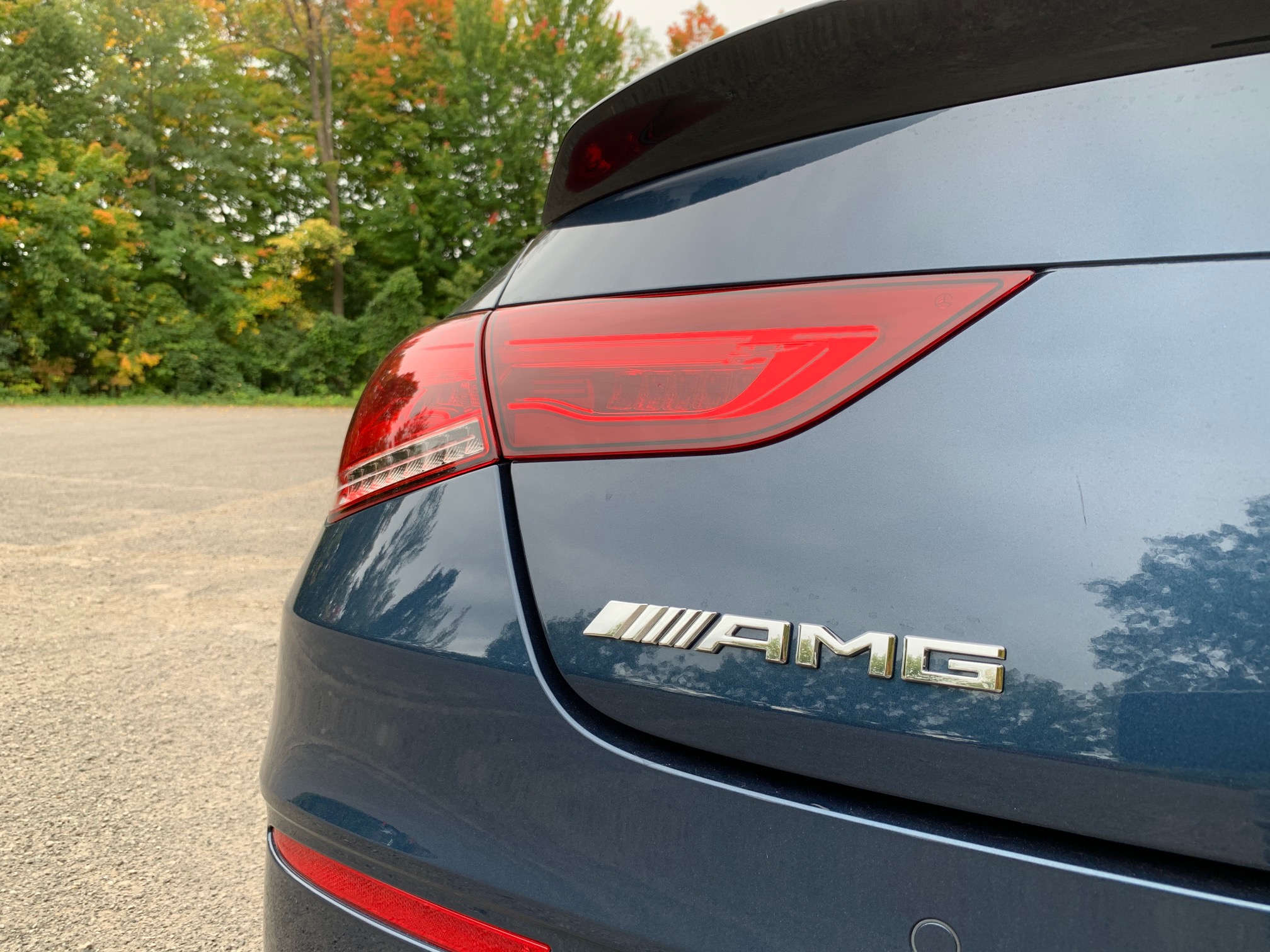 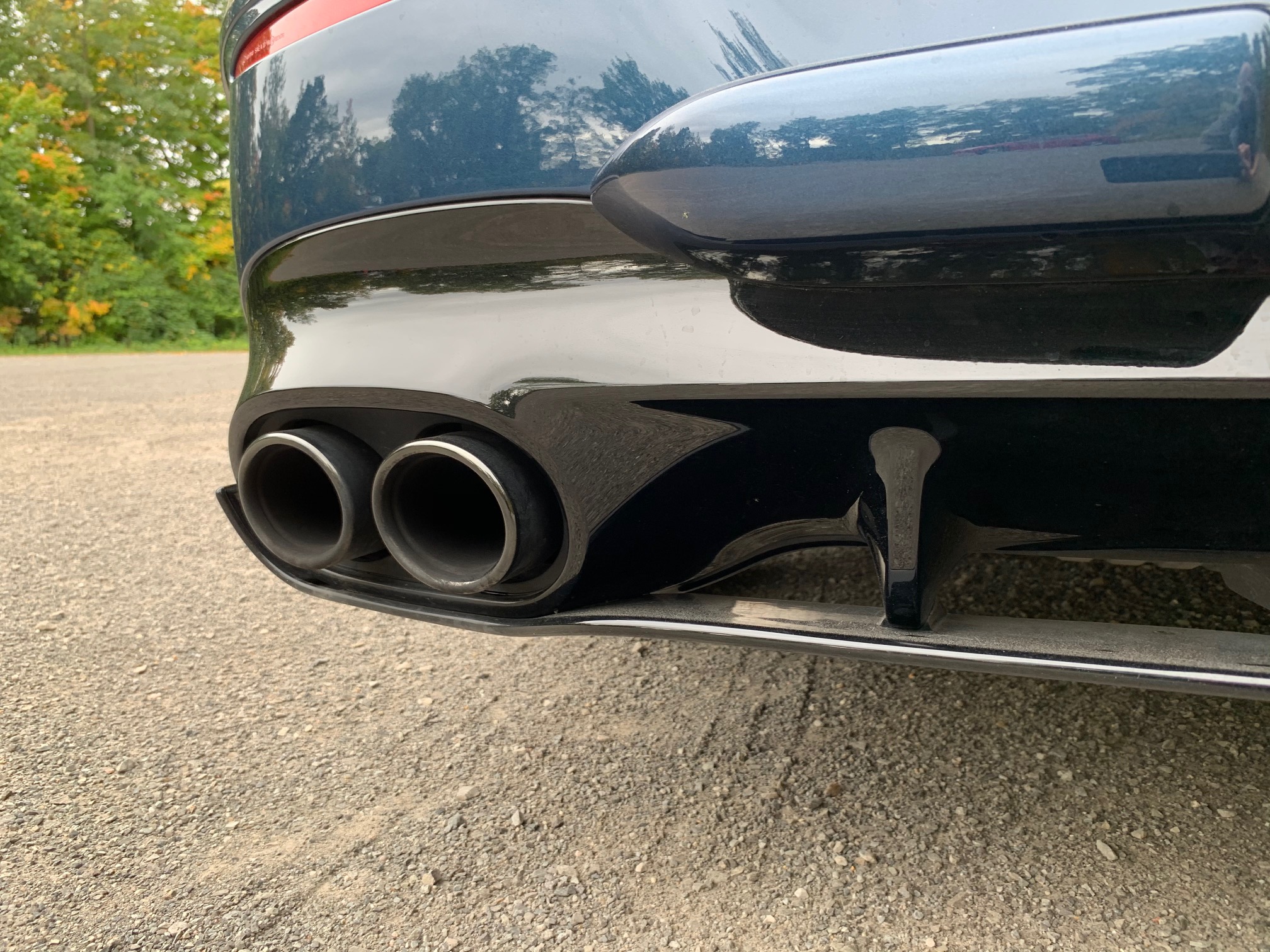 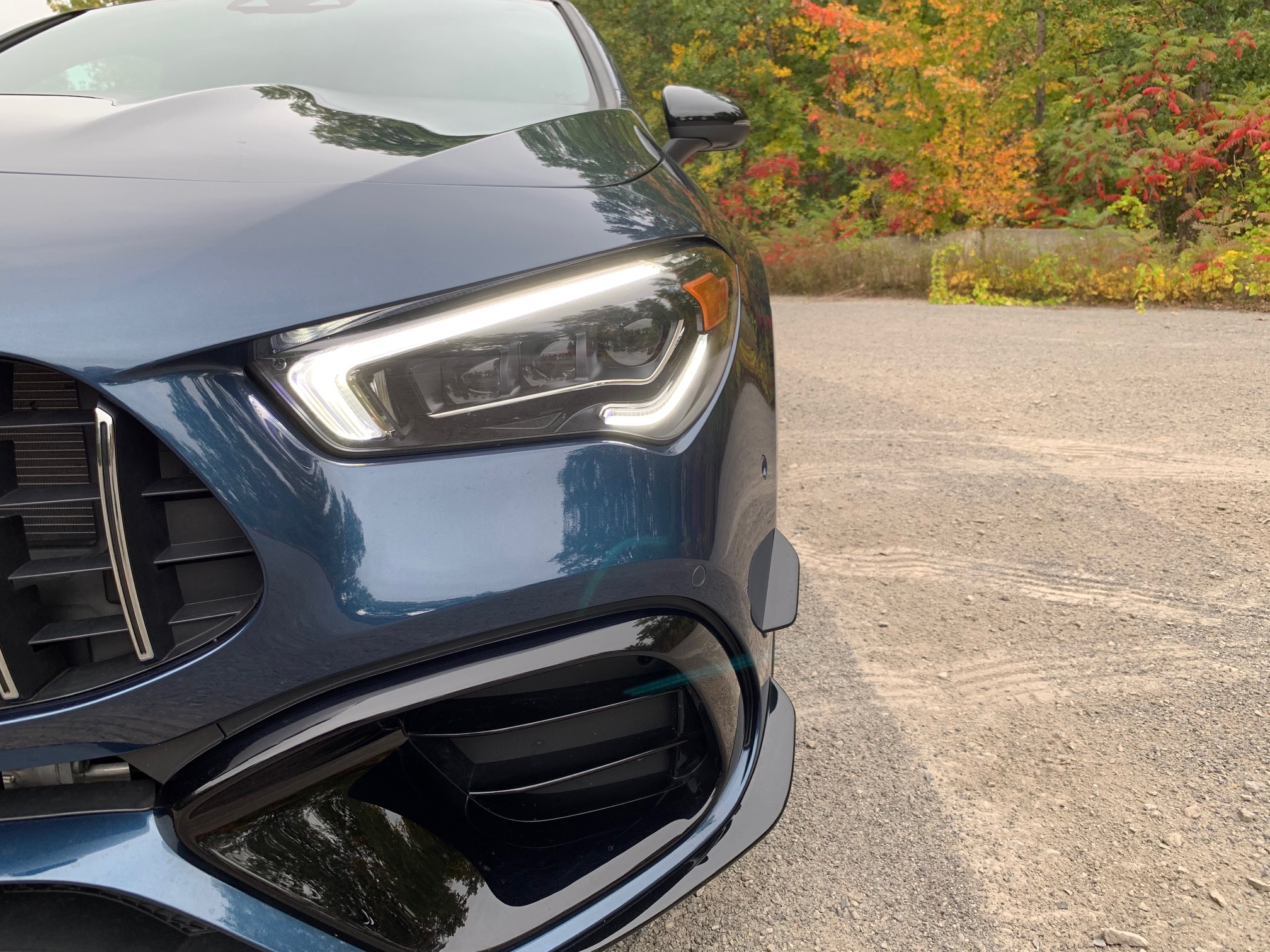 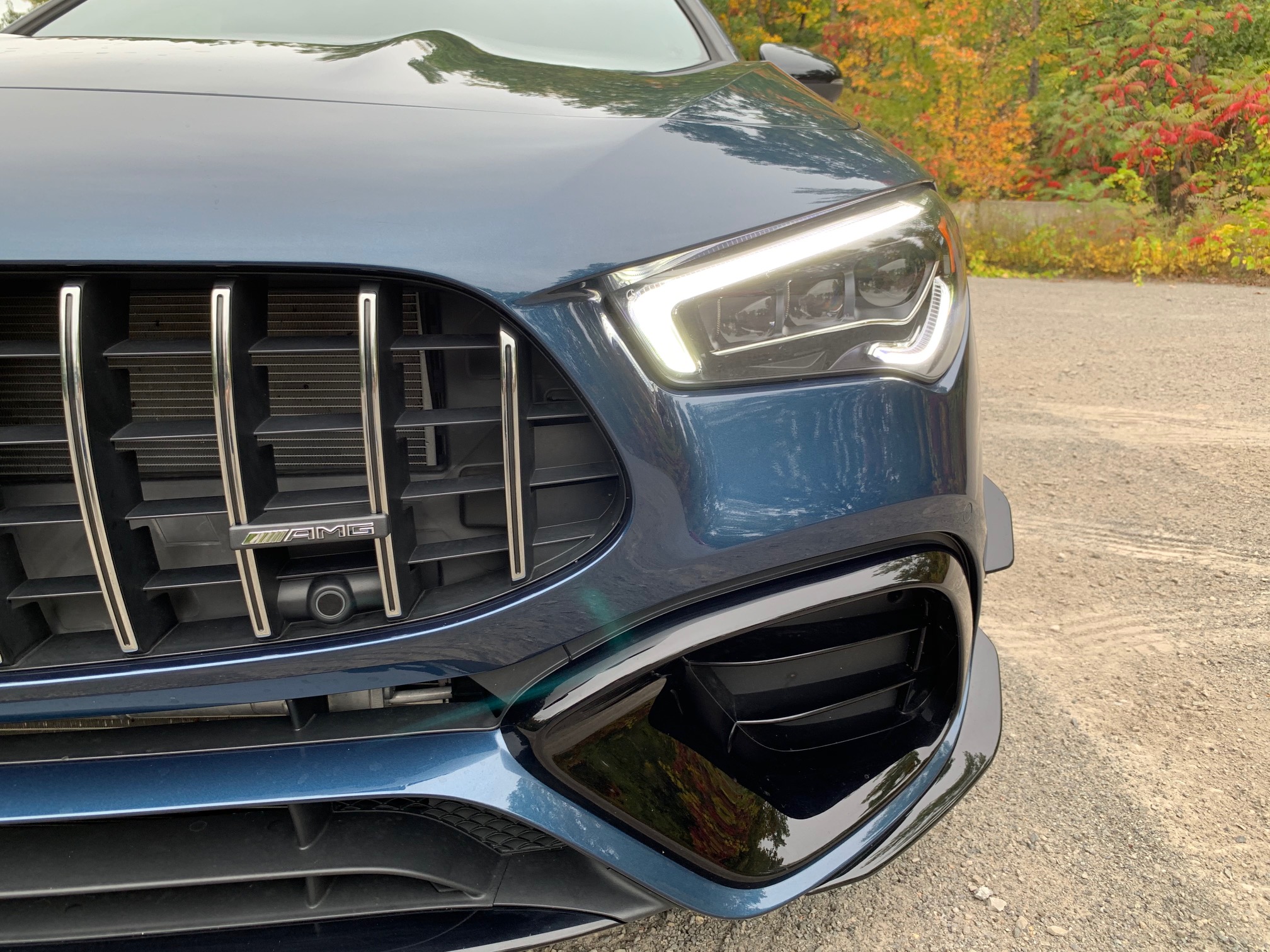 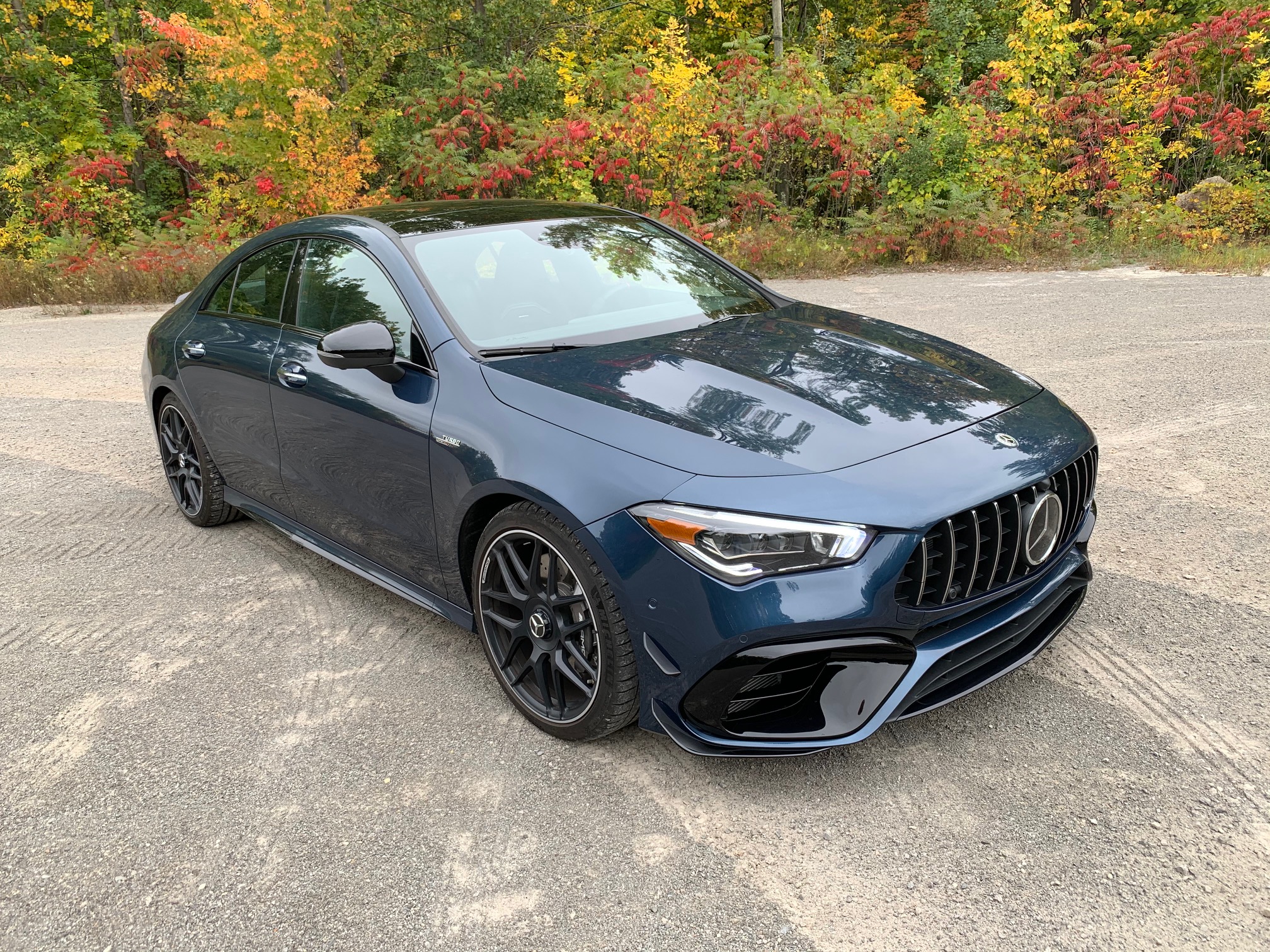 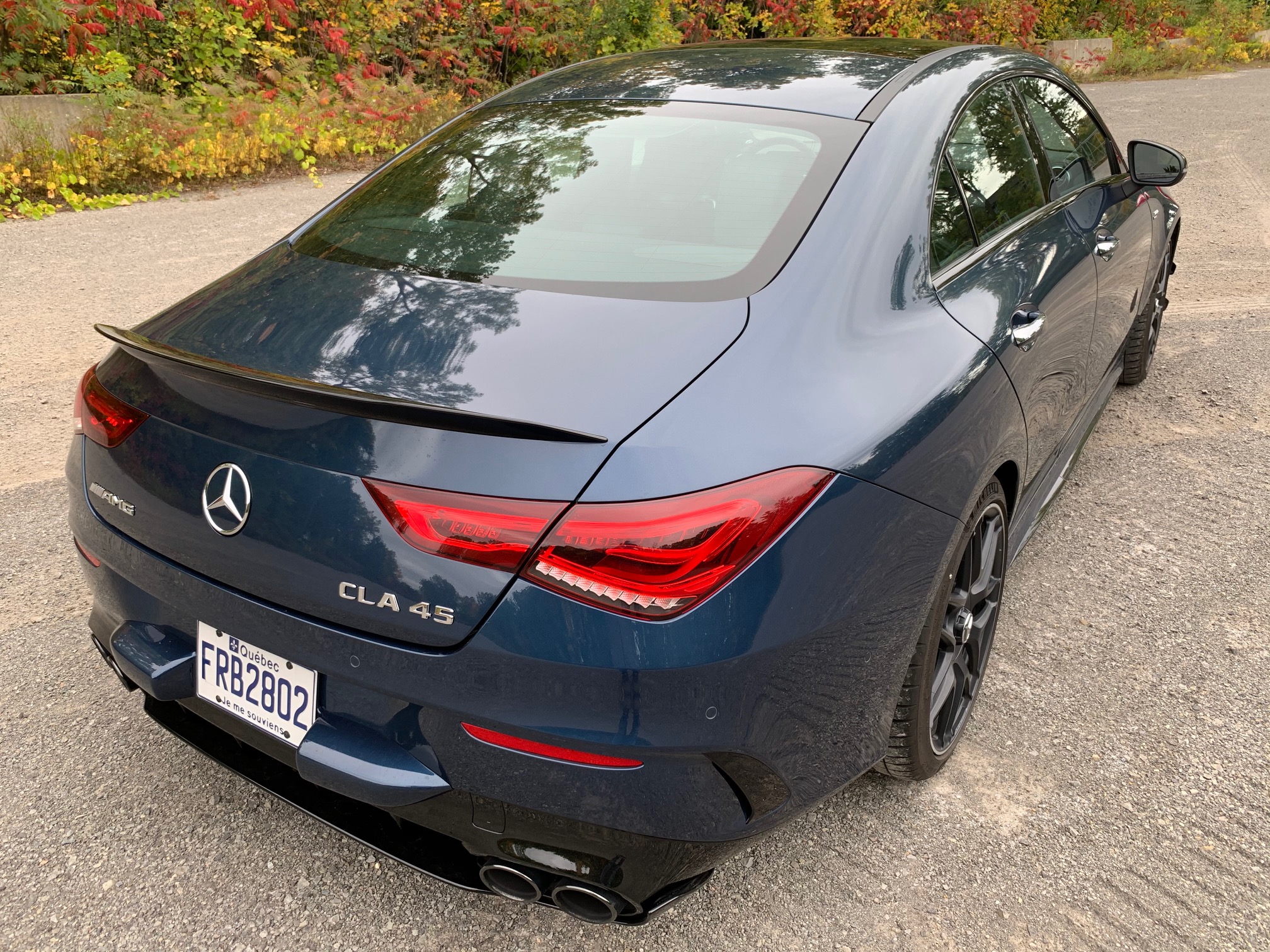 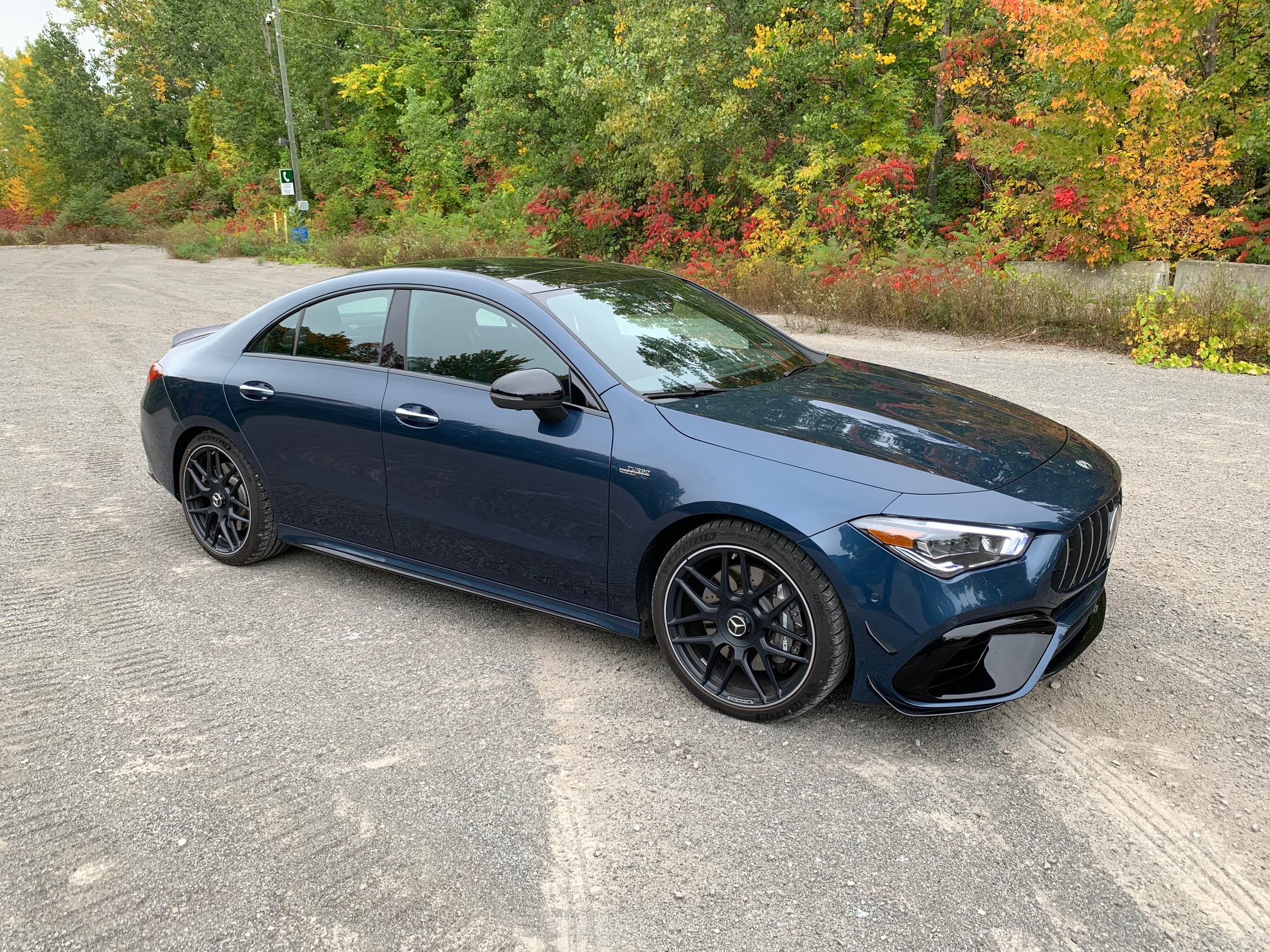 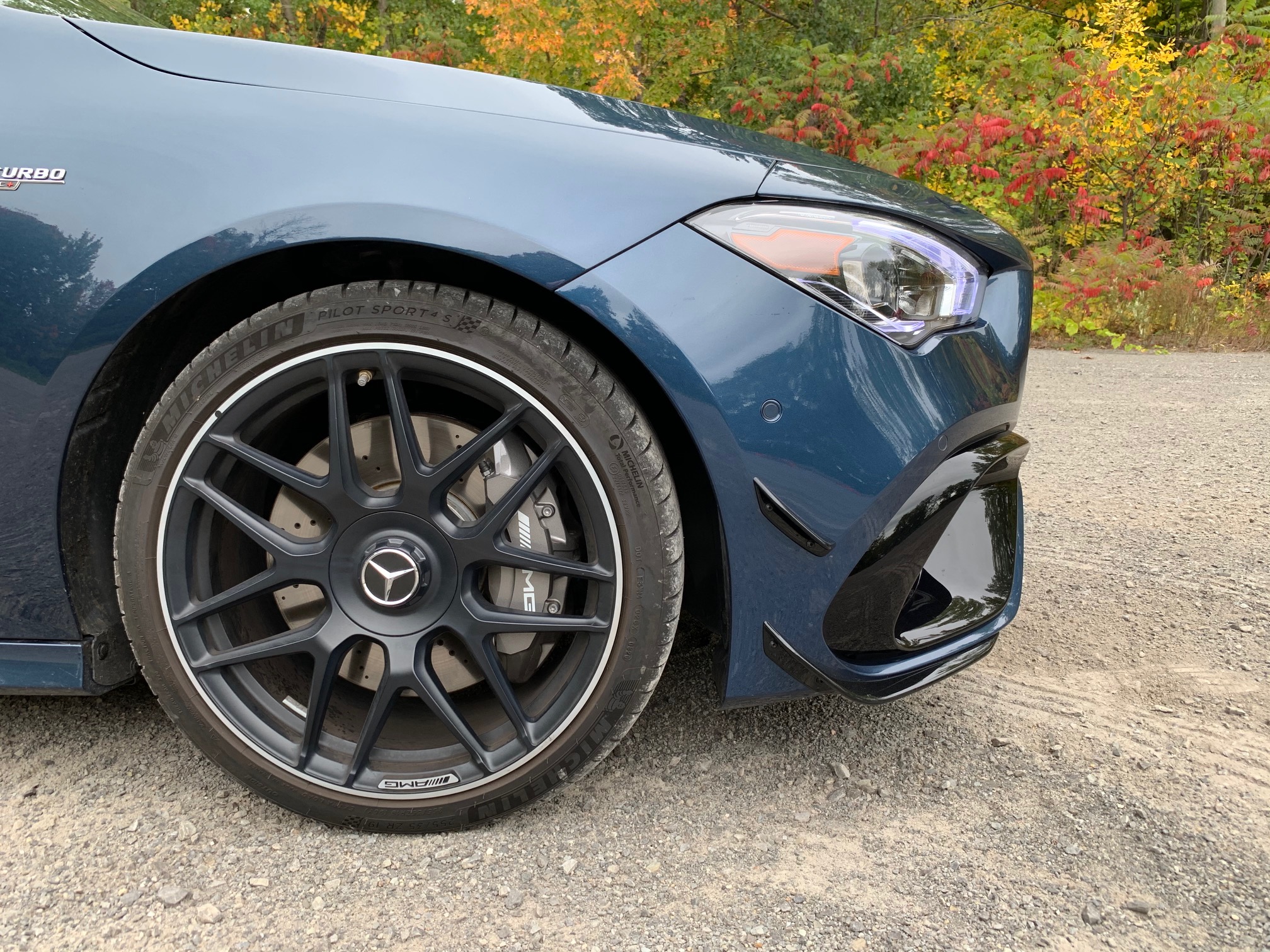 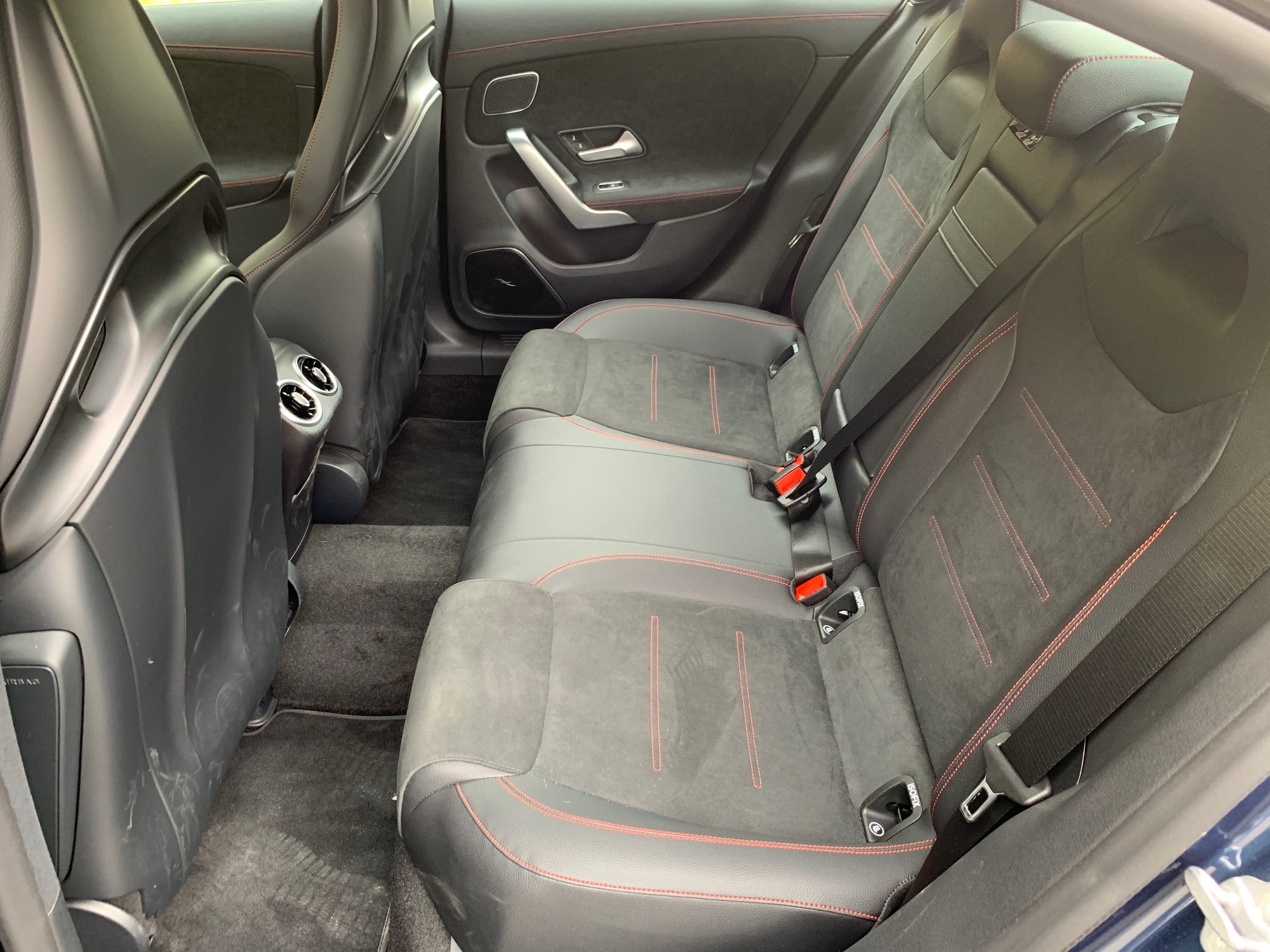 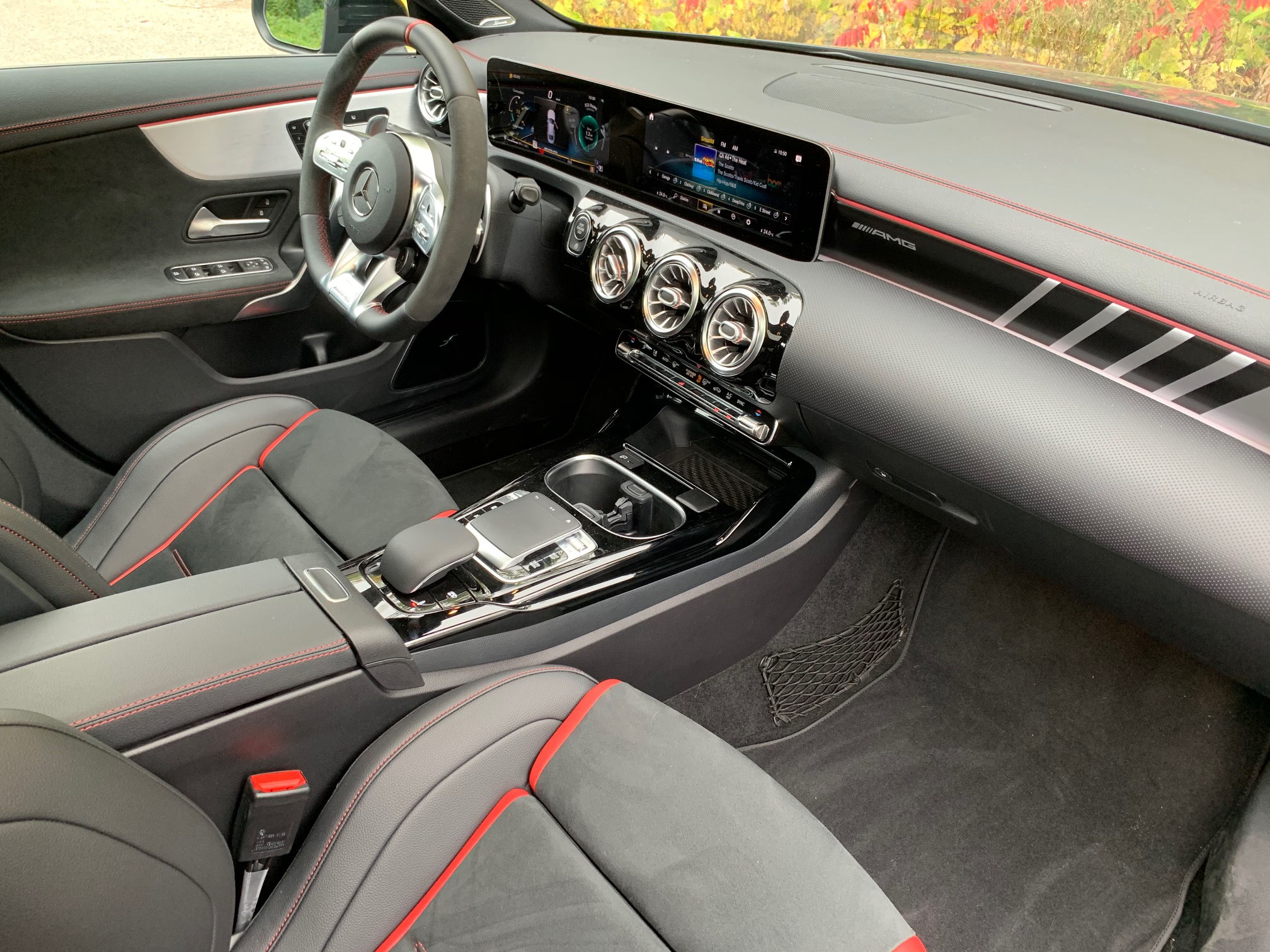 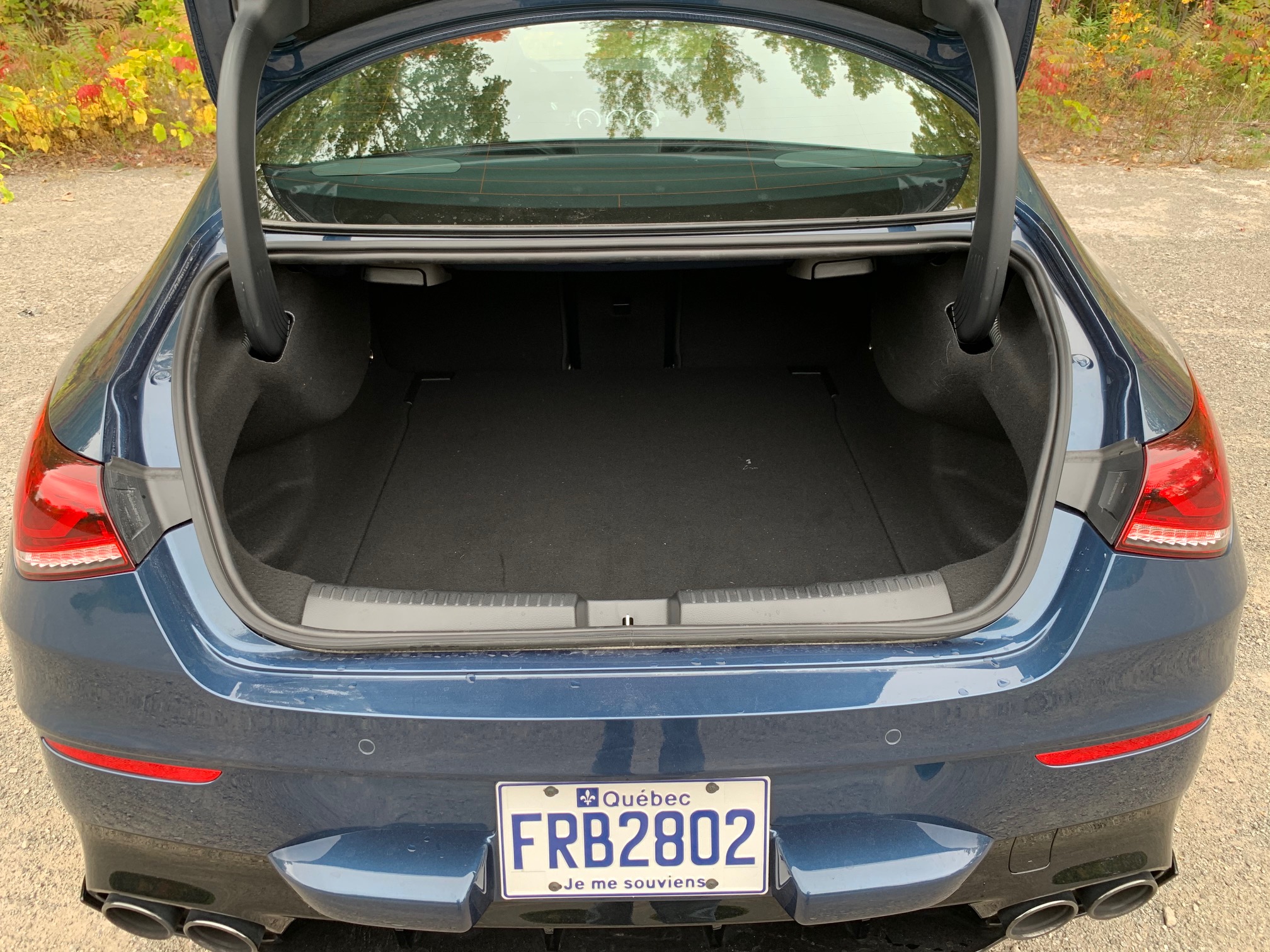 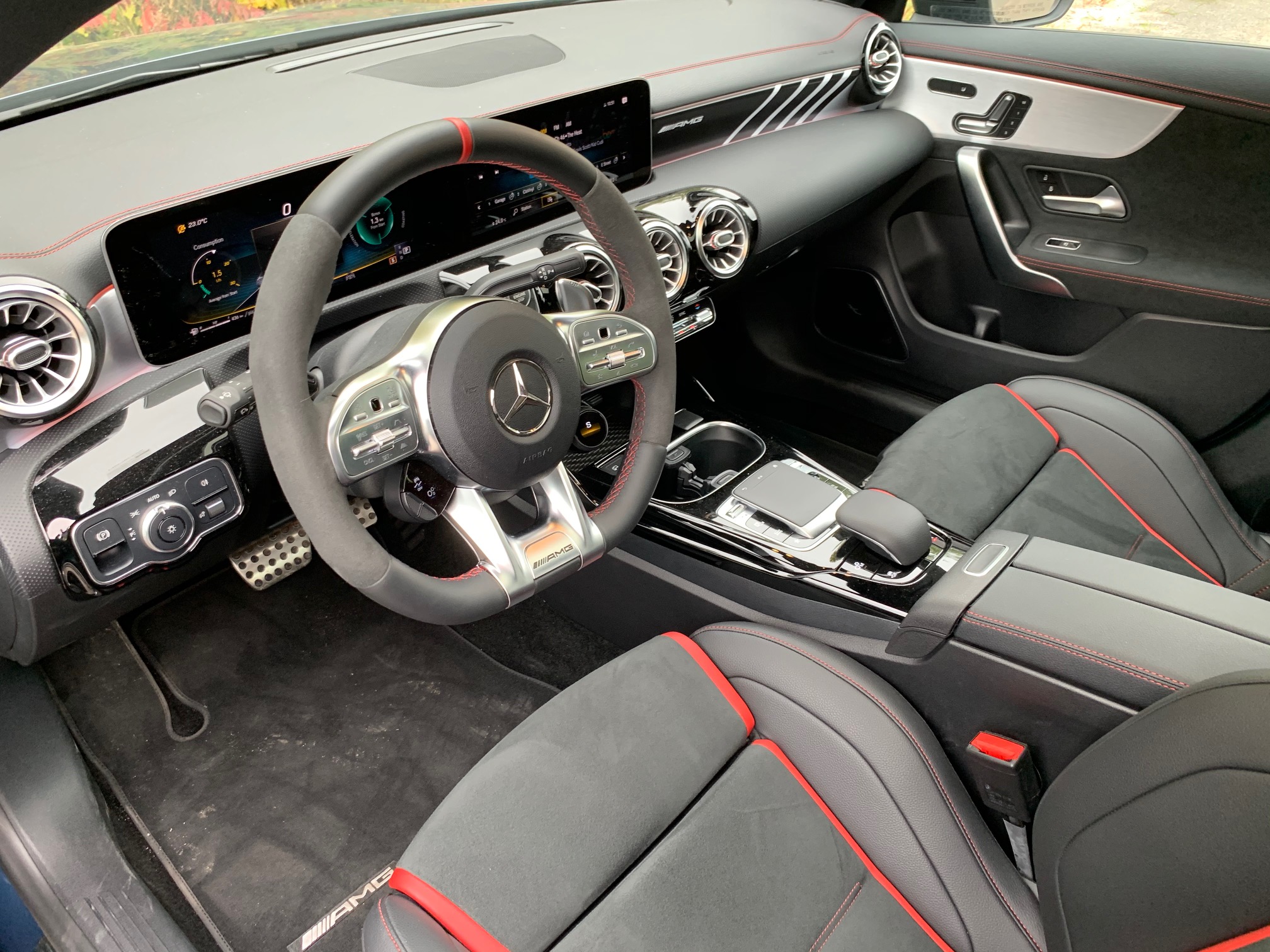 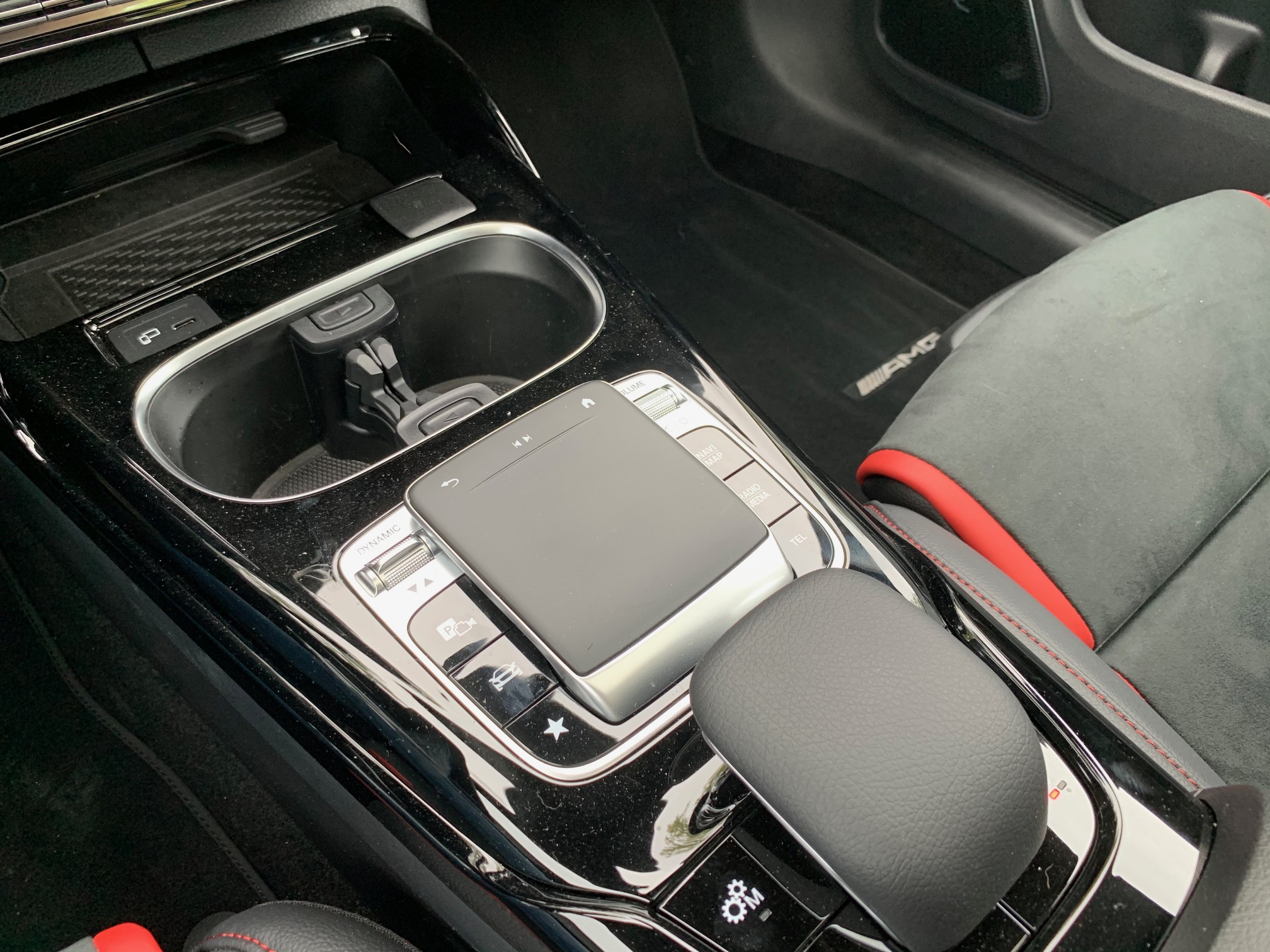 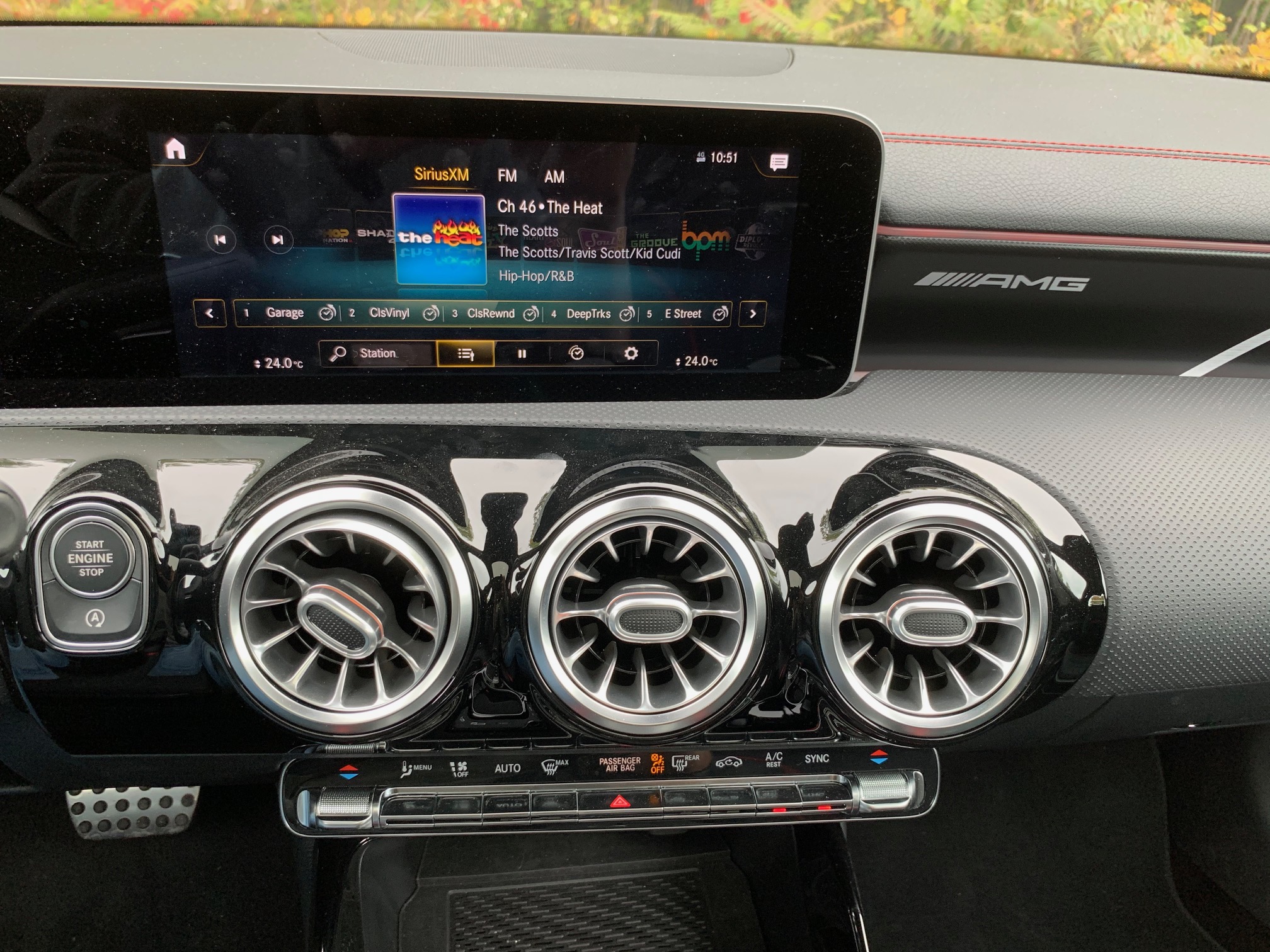 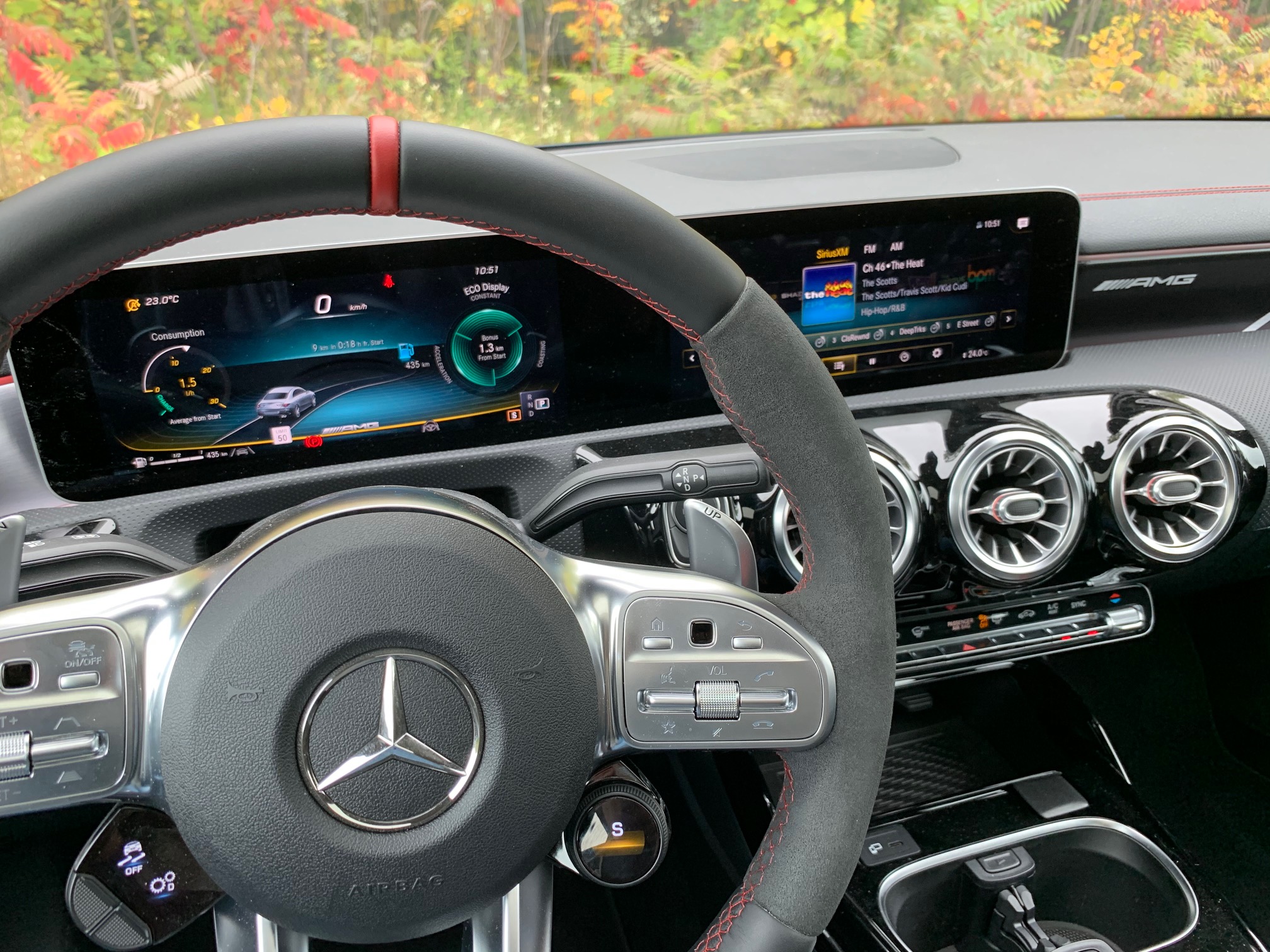 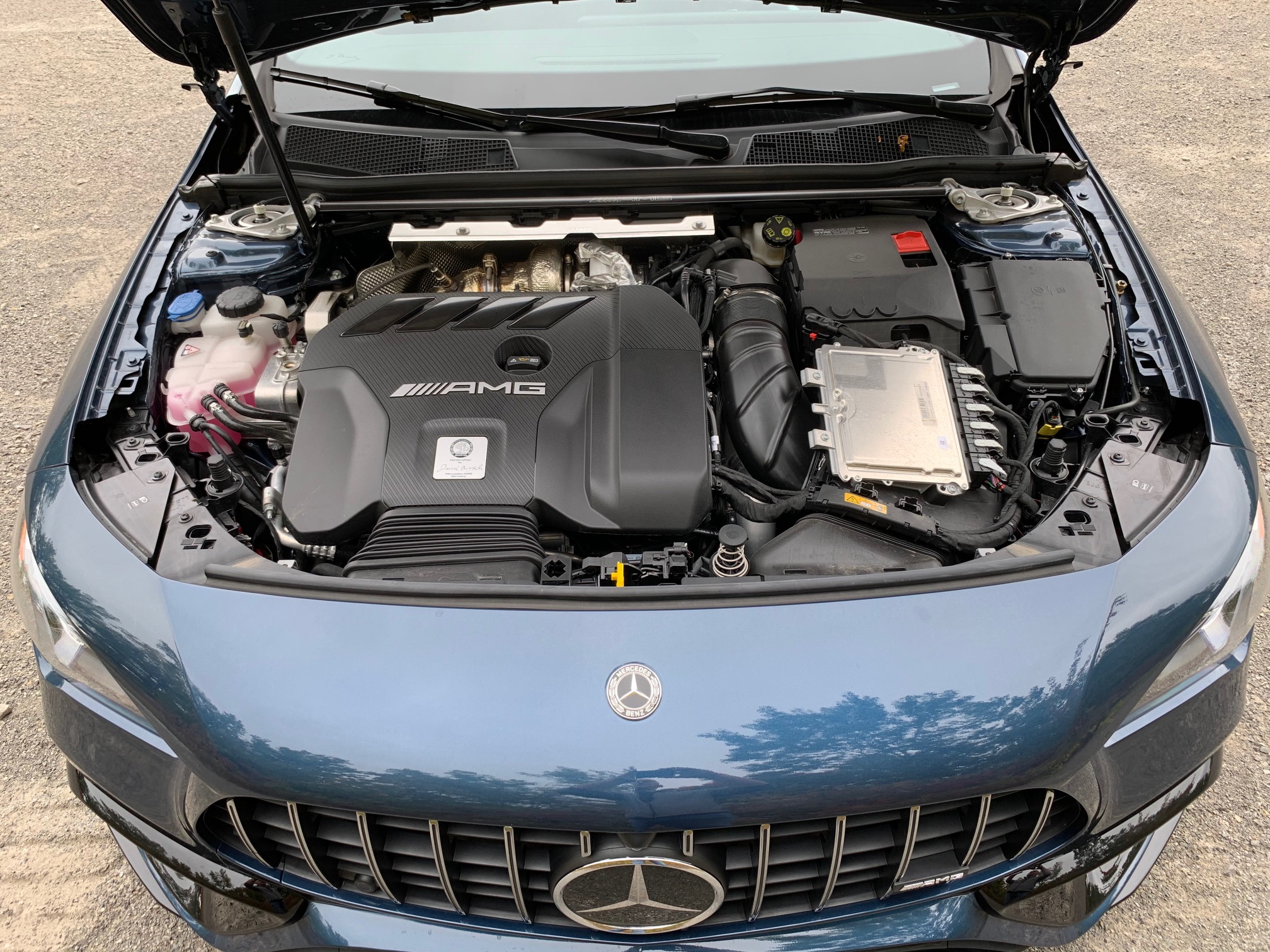 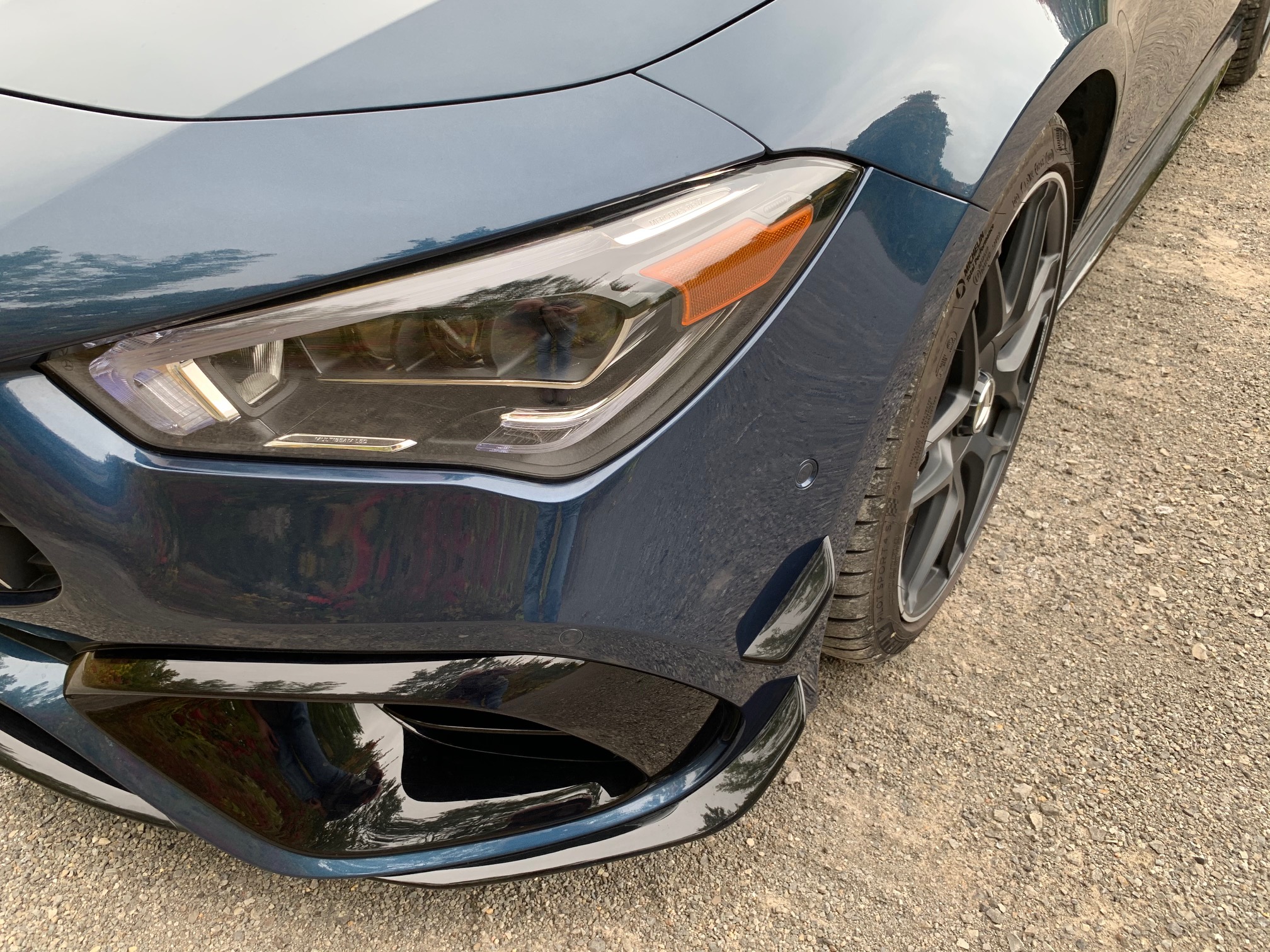