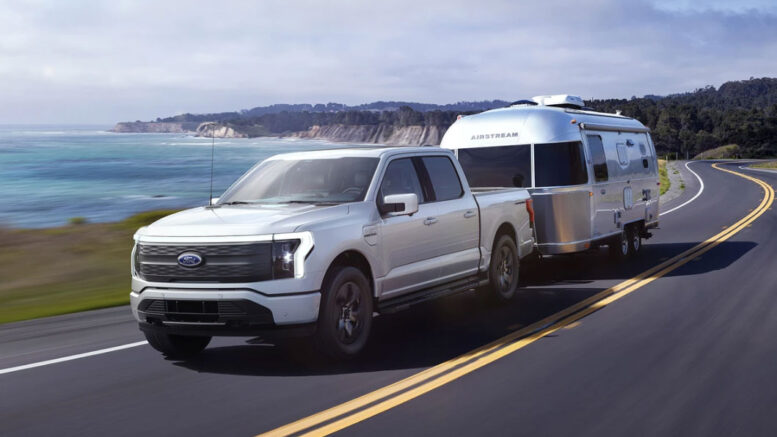 Ford gave journalists an opportunity to test drive the all-new F-150 Lighting pickup truck in Texas last week and the reviews have started coming in.

For those who are unaware, the F-150 Lighting used to be a performance model of the popular F-150 pickup. Ford’s new Lighting could still fall under that banner however with one caveat – the new Lighting is 100% electric.

Let’s start with the numbers: The standard battery pack produces 452 horsepower. There is the option of an extended-range pack which produces 580 horsepower. They are each capable of producing 775 lb-ft of torque, the most ever in an F-150 model.

The standard range pack will allow you to drive for 370 kilometres and the extended range tops out at 515 kilometres which is nothing to scoff at. Furthermore, due to the weight of the battery packs that run under the floor and box of the pickup, the rear end is equipped with an independent suspension.

Ford says 75 per cent of F-150 owners tow things with their pickups, so the truck needed to be able to match gasoline F-150s in that regard. With the stated amount of torque that wasn’t going to be a problem. With the extended-range Lightning’s maximum towing capacity (10,000 lbs) and payload (2,235 lbs) it also doesn’t disappoint.

Does towing impact range? Absolutely. Ford estimates that towing a 10,000-pound trailer would cut the range in half.

In terms of charging time, a 150-kilowatt DC fast-charger, can get you 87 kilometres of range with 10 minutes of charging time. It can also charge from 15 to 80 per cent in just over 40 minutes.

The electric drive feeling will be foreign to most pickup owners. The dynamics of the weight distribution are going to be much different that your run of the mill bouncy pickup with a light back end. That being said, being able to effortlessly whoosh up to speed from a stop sign is something that most people find quite addictive.

Give the fact that the F-150 is the most sold vehicle in North America for the last 1 million years, this new electric version has the potential to be very successful. Will it replace gasoline versions entirely? Who knows, but it’s certainly a possibility.