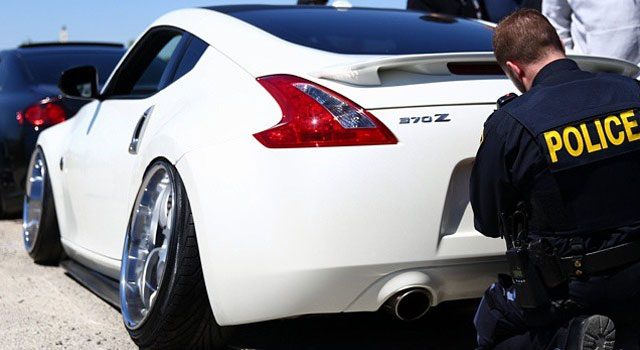 Fitted 2015 is an annual show held at the Brampton fairgrounds in Ontario. The theme of the show focuses on wheel fitment so one can expect to see numerous setups involving stretched tires and very low cars.

During the roll-in and much to the dismay of the show participants police arrived to stop Mike Howe’s Nissan 370Z (pictured above).

According to witnesses, Howe was attempting to enter the show as a competitor and was intercepted by law enforcement while on private property. They informed him that they stopped him because complaints were received about his driving. The officers deemed his vehicle unsafe and then proceeded to remove his license plate and tow his vehicle. His registration was also confiscated.

Show management tried asking the officers for leniency given that a car show was taking place but they were having none of it.

In Ontario, police officers have full discretion as to what they can deem “unsafe”. An officer can decide to have your vehicle taken off the road on the spot if your vehicle doesn’t sit right with them.

When compared to laws regarding modified vehicles in Quebec, it would seem like we might actually be better off than Ontarians given such ambiguity. The only thing we could find online about the subject was an official document that attempts to explain Ontario’s Highway Traffic Act. You can read that document here.

Edit: An earlier version of this article suggested that police were out in full force but this doesn’t appear to be the case. They were only called to intercept this one vehicle.

The SAAQ Will Lower Rates!