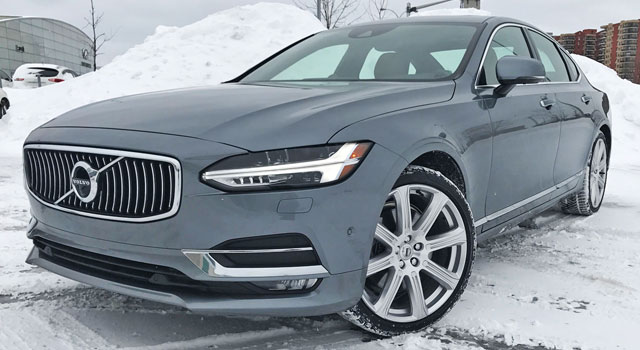 Volvo’s resurgence continues full speed ahead as the Swedish company continues to release new models that both please the eye and push the limits of innovation.

The new S90 debuted at the 2016 Detroit Auto Show, replacing the outgoing S80 in Volvo’s lineup. It’s a good thing because the S80 had really run its course, sticking around perhaps several years too long. But that’s all in the past as the sleek new S90 will turn heads at almost every corner. In fact the vehicle won Production Car Design of the Year which is a prestigious award decided by eighteen top car designers around the world from companies such as Bentley, Daimler, McLaren and Ferrari.

Volvo’s new design language is simply lovely with the most distinctive feature being the T-shaped daytime running lights inspired by “Thor’s hammer”. The front end has a sleek, almost shark-like persona to it and doesn’t resemble anything else on the market. Despite this fact, it’s still instantly recognizable as a Volvo. The body is free of any creases or indentations, providing for a smooth and classy form. The taillight design took some getting used to but in the end the square bracket-shaped lamps do the job and grew on me the more I looked at them.

Moving on the interior we find a fantastically modern ambiance from the ground up. The first thing that strikes you before even sitting down is just how comfortable the seats look. They don’t disappoint and sitting in them will give you levels of comfort approaching your favorite living room chair. The materials Volvo has chosen for the dash and panels give a very high end look and finish. Brushed aluminum trim, wood paneling and premium leather with white stitching combine for an all-around upscale cabin feel. All buttons, switches and levers are very firm to the touch, something not a lot of manufacturers are able to produce. All in all, this is a spectacular cabin that rivals any of the other luxury brands.

Volvo has chosen to eliminate many physical buttons in favor of incorporating them into the touchscreen interface. While this produces a clutter-free dash, I find a bit complicated to quickly change some settings such as the climate control. I often play with the fan settings (especially on cold winter days) and having a hit a few extra buttons makes a difference in how quickly I’m able to get what I need done.

The new infotainment system (called Sensus Connect) is modeled after a smartphone with a home button and menus which can be accessed by swiping left or right. Volvo offers a course on how to operate it because it takes quite a bit of getting used to. After a while I found it quite functional and easy enough to use.

The standard audio system is good enough but the optional Bower & Wilkins system is unlike anything I’ve heard before to be honest. The clarity of the sound is simply on another level (so much so that even AM radio sounded good) thanks in part to the open-air subwoofer and dashboard tweeter.

Where the S90 really shines and where Volvo’s technological innovation impresses is the brand new Drive-E powertrain. Volvo spent $11 billion USD in the past five years investing in technology and it sure as heck shows. Ironically there is only a single engine option but it’s amazing: the turbocharged AND supercharged 2.0-litre inline four-cylinder. You did read that correctly. It has both a supercharger and a turbocharger working together – one of the few examples for a production vehicle. The dual methods of forced induction combine to extract remarkable performance – 316 horsepower & 295 lb. ft. of torque to be exact. The upside to having a smaller motor is, of course, fuel economy. I averaged a respectable 11.2 L/100KM which isn’t bad but a smidgen higher than the posted rating.

The distinct pitch of a four-cylinder is apparent when stepping on the gas but it had all the power I needed and more. Combined with Volvo’s standard all-wheel drive system, it made for a very enjoyable package of fun – especially on the snow-covered icy back roads in my neighborhood. On dry roads I found the S90 to be sportier than I expected. Even for a large sedan it’s quite nimble and agile.

Volvo has incorporated a self-driving system for highway driving. You still need to keep your hands on the wheel and face forward but it can remain with a lane and stop when necessary. Right now it’s more of a gimmick but it can help if you get caught in stop and go traffic.

The S90 is the least expensive option out of the Mercedes-Benz E-Class, BMW 5 Series and Audi A6, ringing in at a reasonable $56,900. For what it has to offer, it should be at the top of anyone’s shortlist in this segment. That says a lot about what Volvo has accomplished given there is such strong competition.

Reminder: Eurokracy Is This Weekend