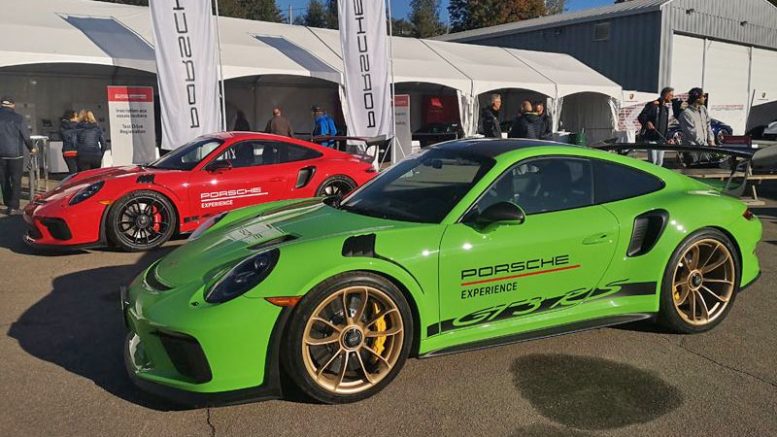 This past weekend, I had the opportunity to attend the Destination Porsche event at Circuit Mont-Tremblant. Destination Porsche is a first-time event held in Canada to celebrate the brand’s previous classic models with the Classic Restoration Challenge, new Porsche models (including the Taycan and all-new 992 Carrera), and most importantly the final round of the 2019 Porsche GT3 Cup Challenge Canada by Yokohama. For those unfamiliar with the series, it’s contested over 6 weekends with 10 teams and 16 drivers.

The series is split into two categories, Platinum and Gold, with most teams competing in Platinum with Porsche GT3 991.2 Cup Cars and Gold with the older Porsche GT3 991.1 Cup cars. All cars use the same Yokohama Advan tires, same fuel and are built to the same specifications. Overall, the Porsche GT3 Cup Challenge is one of the largest single make racing series in North America, and the world. Eighteen-year-old Roman De Angelis driving the No.79 Mark Motors Racing GT3 Cup only needed to start Saturday’s race to clinch the Platinum series championship.

I arrived at a very soggy Circuit Mont-Tremblant around 8:30 am. LCMT is a track I know very well as a driver and spectator. When dry, it’s already a challenging track. When wet, it certainly demands even more respect. It wasn’t the best day to be outside, but motorsports in the rain always provides an element of the unknown for teams and drivers. Luckily Porsche Canada had a very nice hospitality tent on site where we could all escape the elements if needed. As I headed outside to brave the elements and watch the start of qualifications, the cars were already on their warm-up lap. Positioning myself down near turn 11 would provide a good view of the drivers exiting the turn and heading up towards “Bridge Corner.” Conditions were very wet, but the grip provided by the Yokohama wet weather tires appeared to be excellent from my vantage point, however, I knew that driving in wet conditions is almost like driving on ice. You need to be smooth on the inputs.

After the 15-minute wet qualifying session, SCB Racing driver Parker Thompson would take pole position in Platinum, followed by Roman De Angelis in P2. Sam Fellows would secure P1 for Gold. The first GT3 Cup race of the weekend would be at 1 pm. This left me a few hours to tour the paddock. 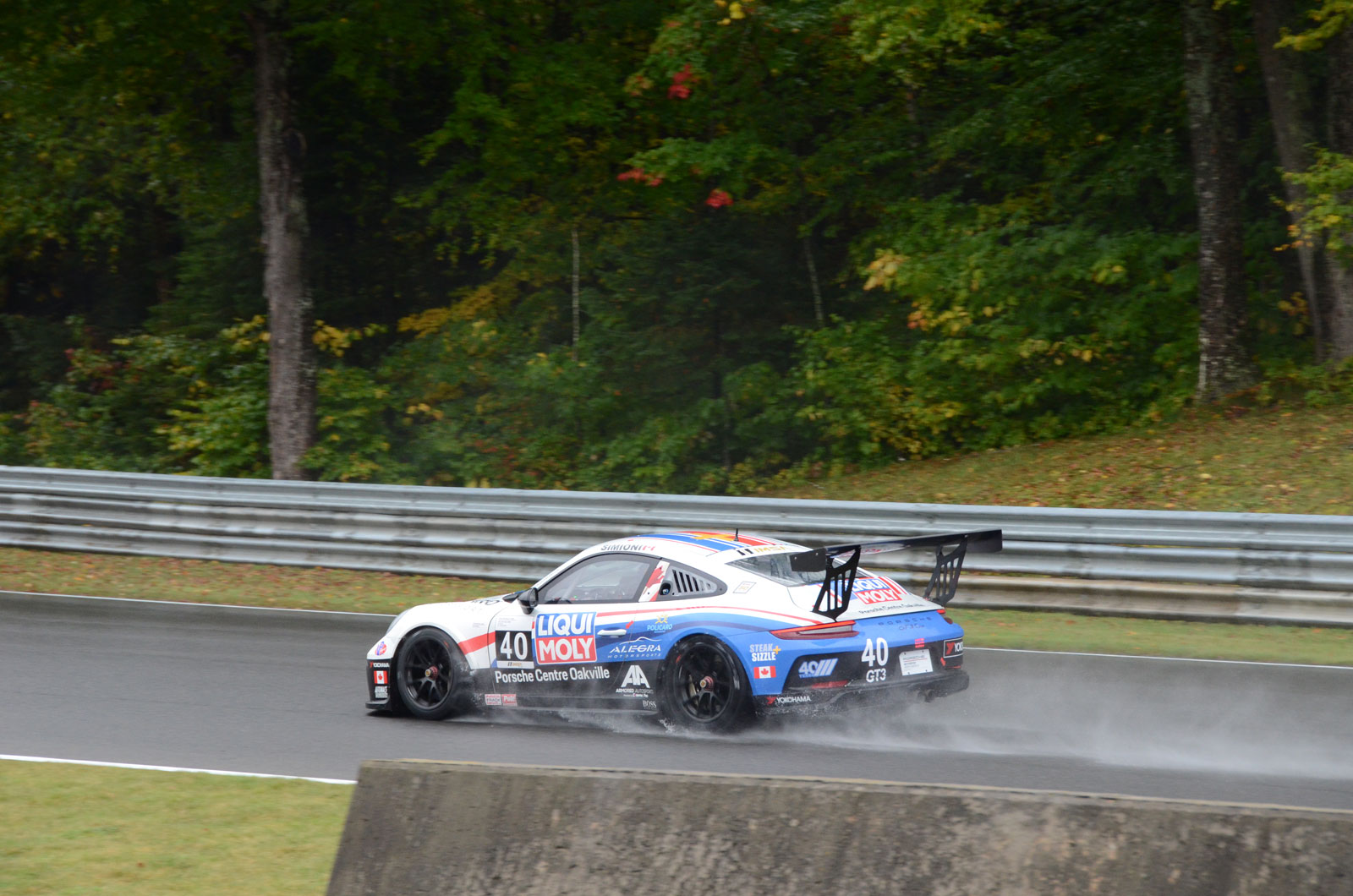 These cars were lovingly worked on by skilled hands, with some cars being in worse condition than others. All original Porsche parts were used and each car featured a brief description of the before/after, along with a parts list. It’s always impressive to see just how much work goes into bringing a car back to life. Being in the trade myself, I always appreciate good work.

With the start of race 1 quickly approaching, I made my way to the top of the hill where I would watch the 25-lap race. I figured this way I could see cars entering Bridge Corner and walk over to turn two if needed. The conditions were still wet, but the heavy rain had stopped and the track had a good amount of standing water lingering around. One team did roll the dice on starting with slicks. As the lights on the GT2 RS safety car turned off, 14 cars were ready to be unleashed at the drop of the green flag. Over the next 25 laps it was a fine balance of speed, precision and tip-toeing around on the wet surface. As each car came by, the spray off the bodywork and rear wing proved it was still very wet as each driver ran slightly different lines looking for much-needed grip. By this point, Roman De Angelis had built up a sizeable lead and went on to win the race by over 13 seconds over the 2nd place finisher Ethan Simioni. De Angelis and Mark Motorsports won the race, and locked up the championship in style with a dominating performance in less than ideal conditions 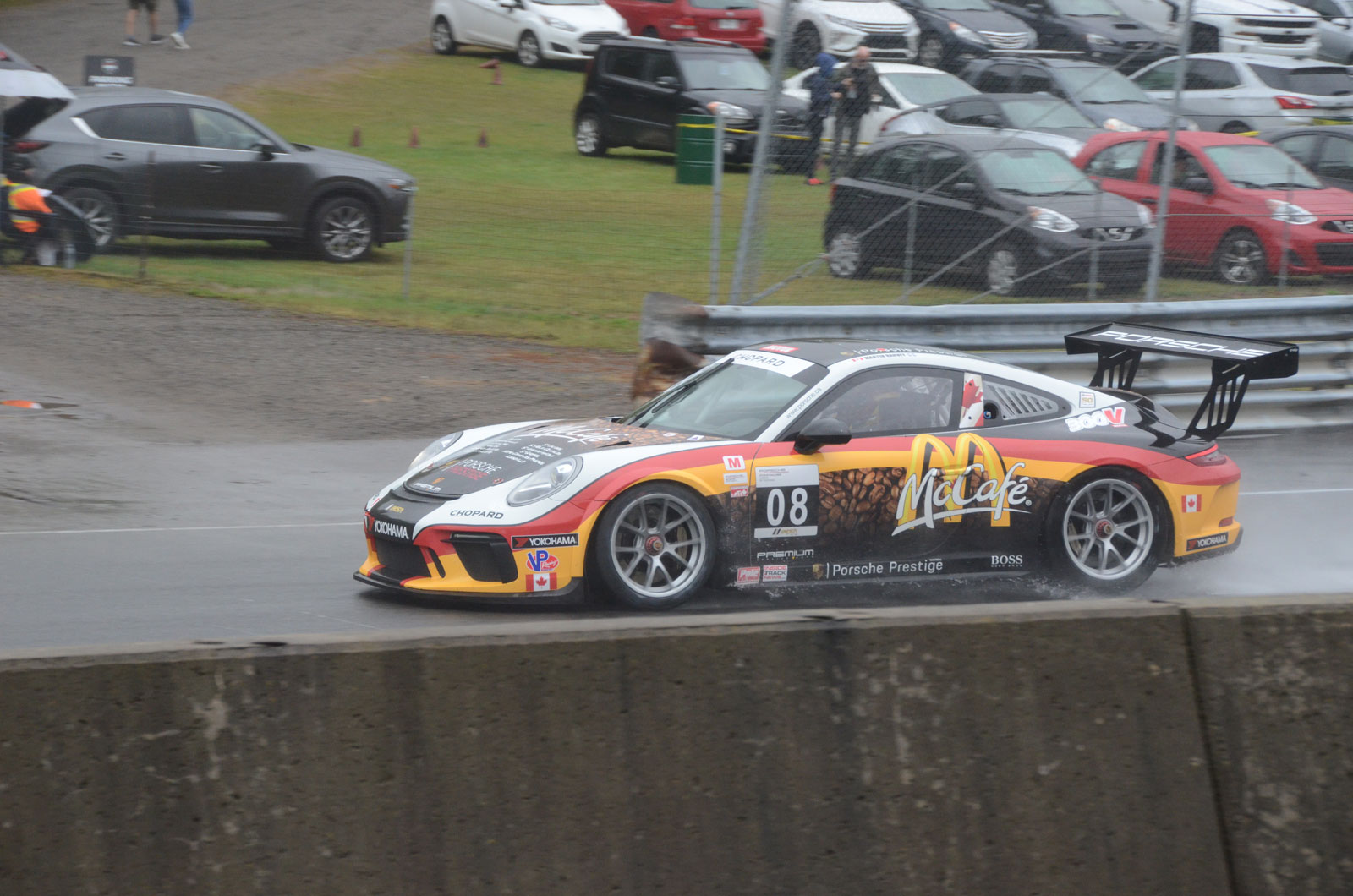 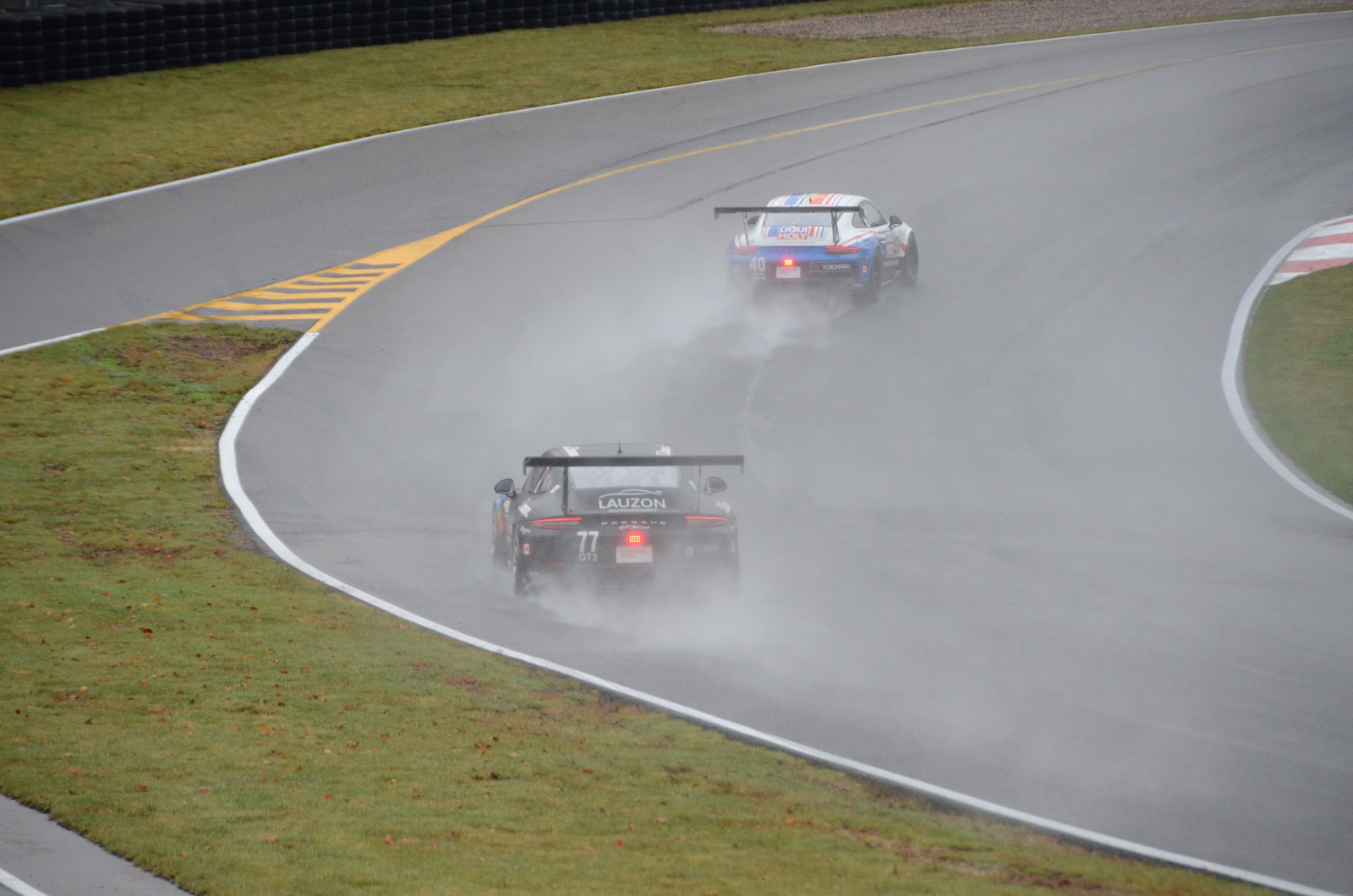 By Sunday morning the rain had gone, the sun was out and it was a typical autumn day in Tremblant. On our way to the track in a new Porsche Macan, provided by Porsche Canada, we all discussed the green track. A green track means a track surface that has no rubber on it as the rain washed it away. This would make for a great race later in the day.

Everyone at the paddock area was in good spirits as the weather was fantastic. After a quick, light breakfast, I made my way around to see everything on display in the sunlight. With the GT3 Cup race at 1 pm, I finally had the chance to watch the other series on track. Again, it was back to the tent for lunch, but once I heard the Cup cars firing up, I made my way back to the top of the hill for the start. 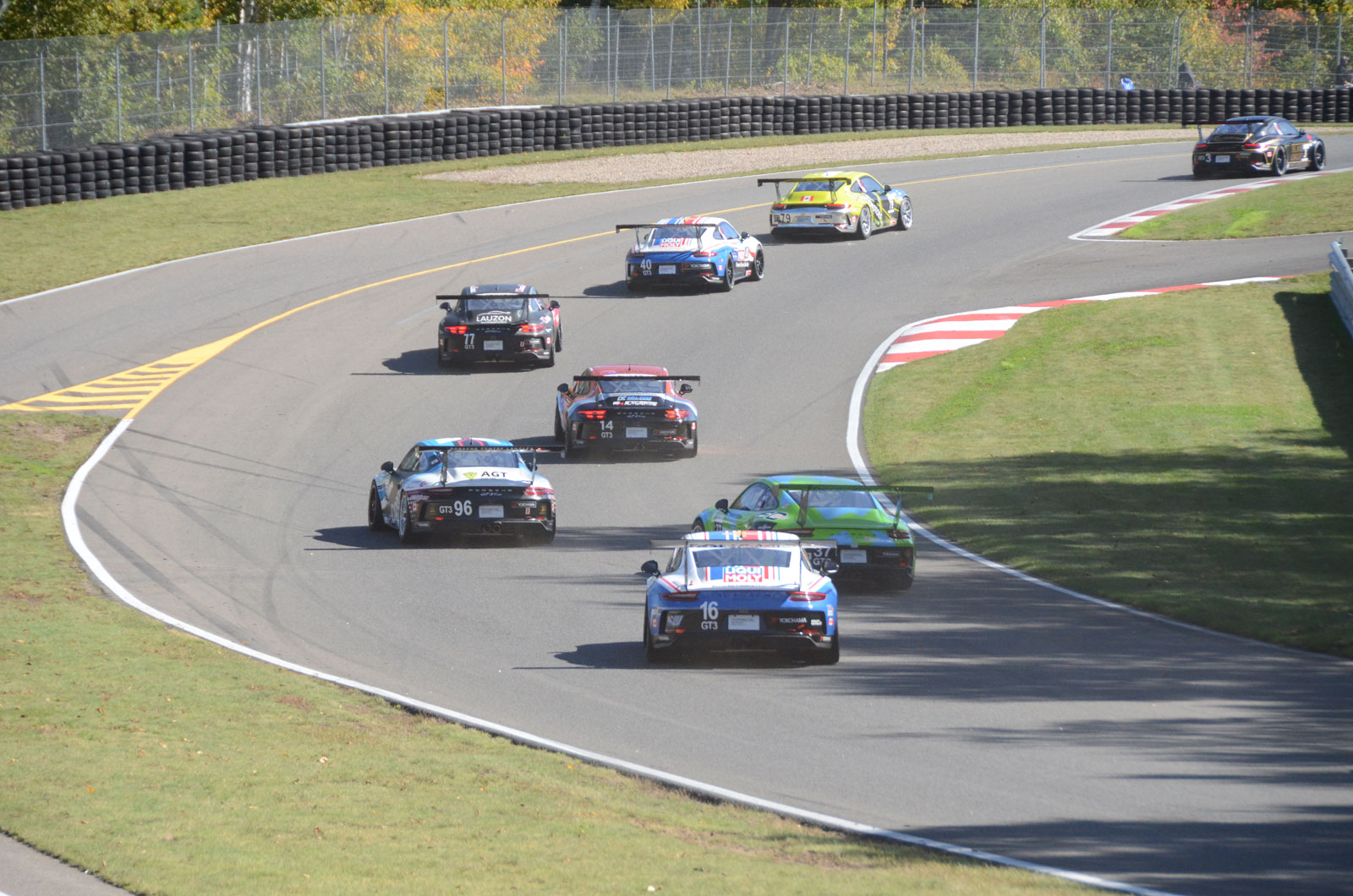 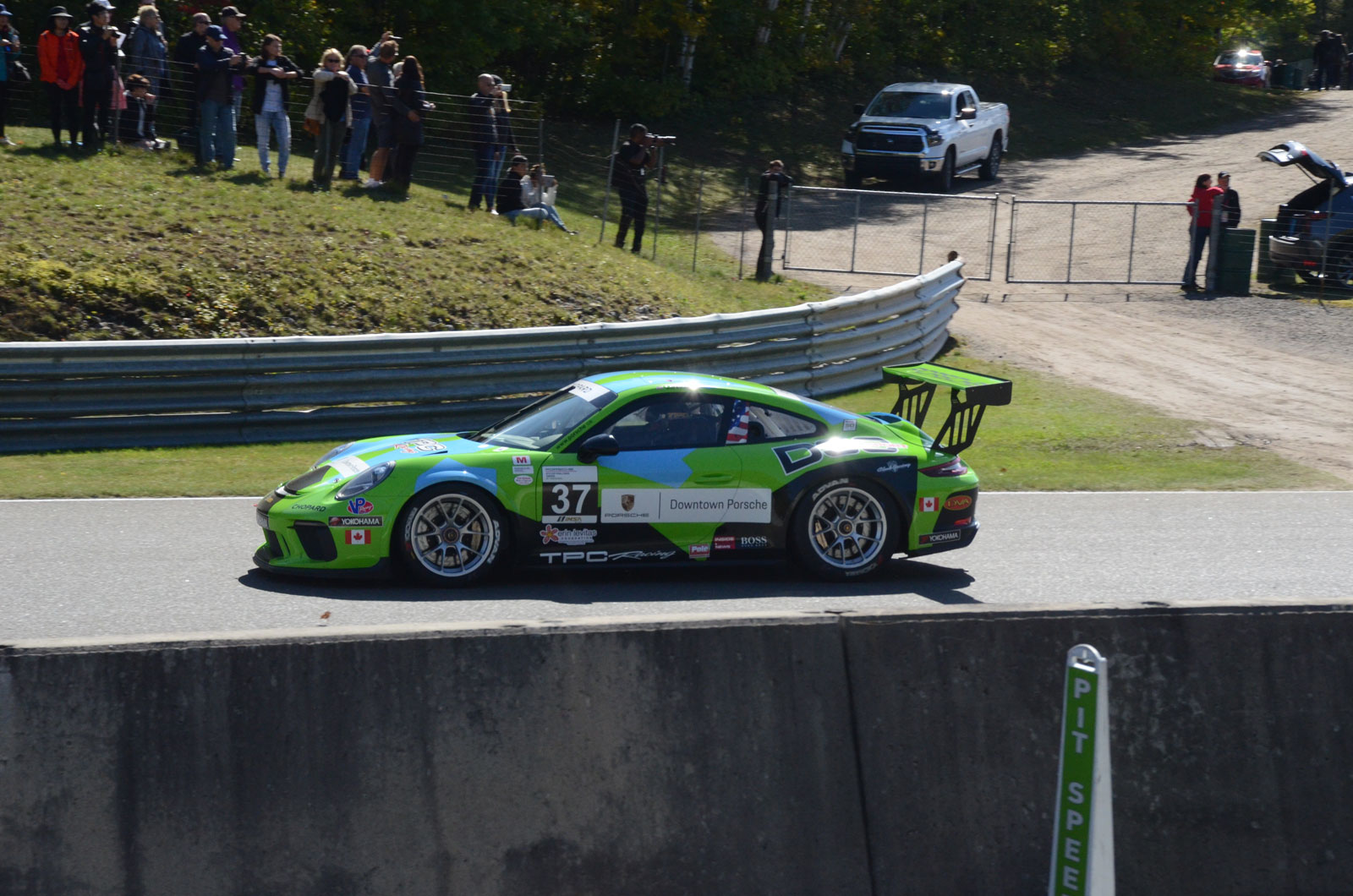 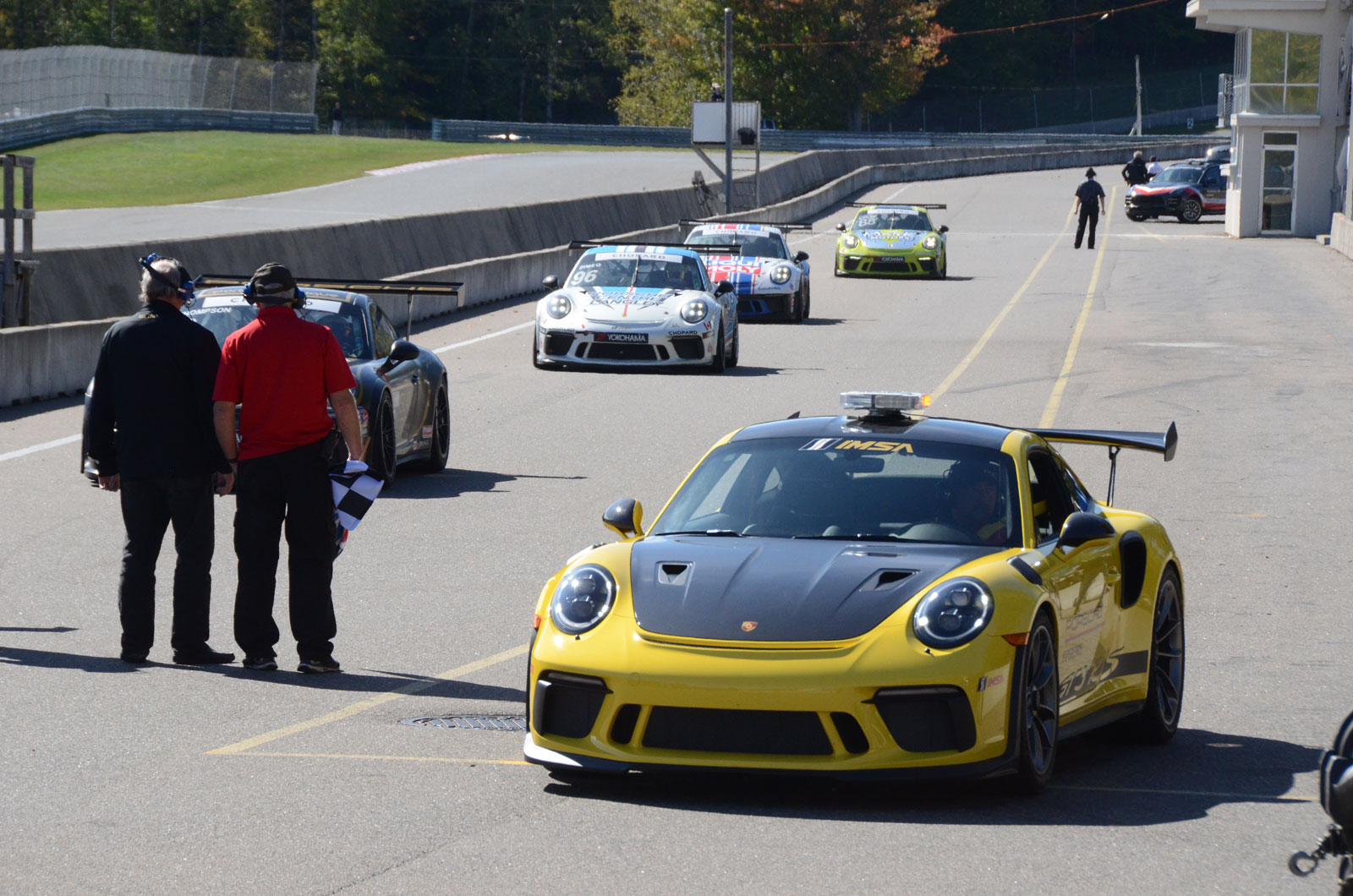 The finale was a thriller from start to finish. The green flag dropped with Parker Thompson leading the field for the 45-minute race. The leaders quickly set a blistering pace over the next few laps, only to be slowed down by a safety car period before the action was restarted. After 30 minutes of racing the top 5 were separated by only 1 second. It was anyone’s contest at the front, as the laps ran down. With 3 minutes to go in the finale, De Angelis made his move coming out of turn eight for a run down the back straight. Unable to defend against the hard charging De Angelis, Thompson finished in 2nd. De Angelis went on to win his 11th race of the season for Mark Motorsport and was crowned Champion. Sam Fellows was crowned Gold Class Champion.

Porsche Canada put on a great event and I am very grateful I was able to attend. The 2020 season starts Victoria Day week at Canadian Tire Motorsports Park in Ontario. It was a great weekend and it was great to be back at the track. 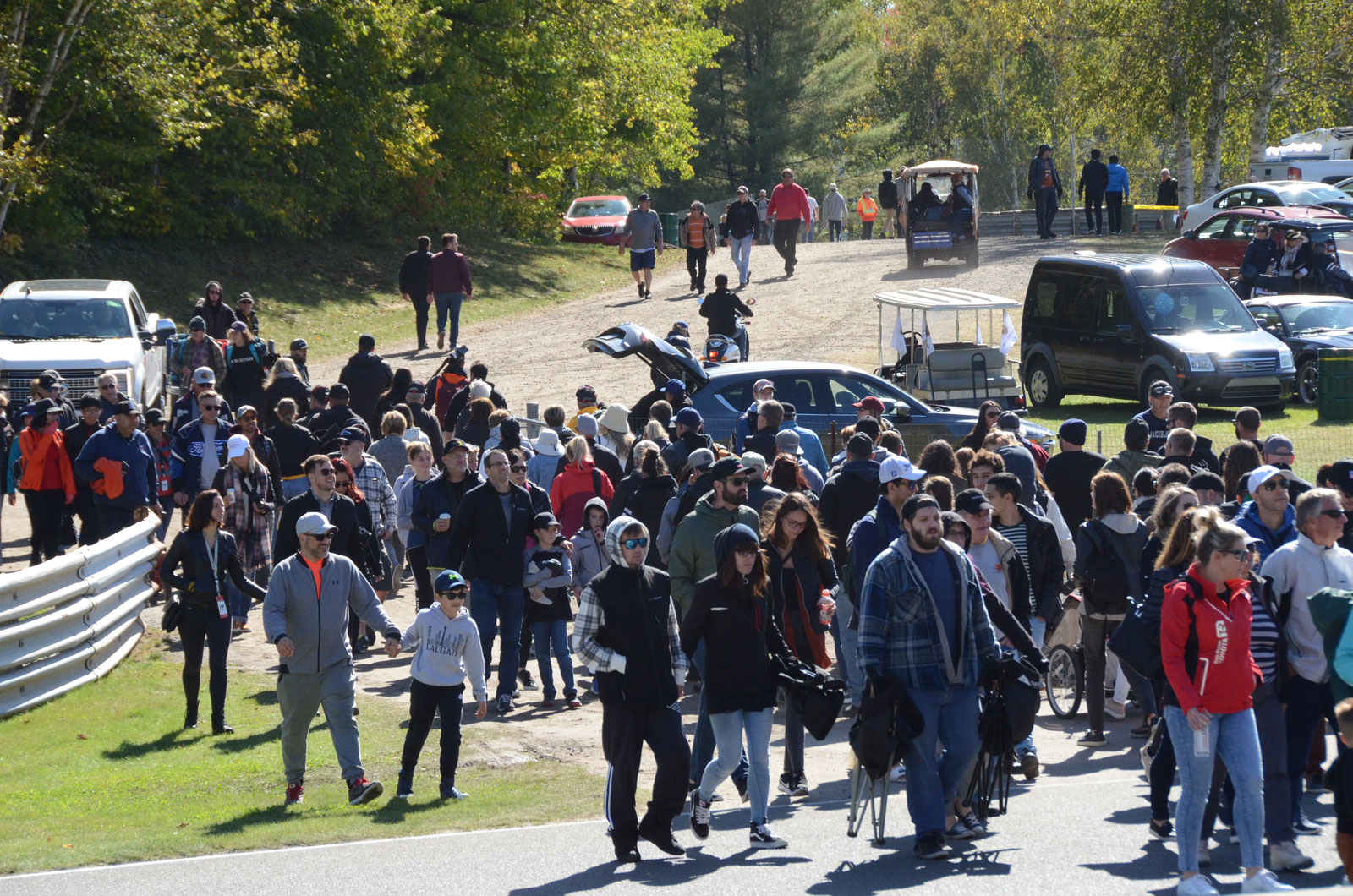 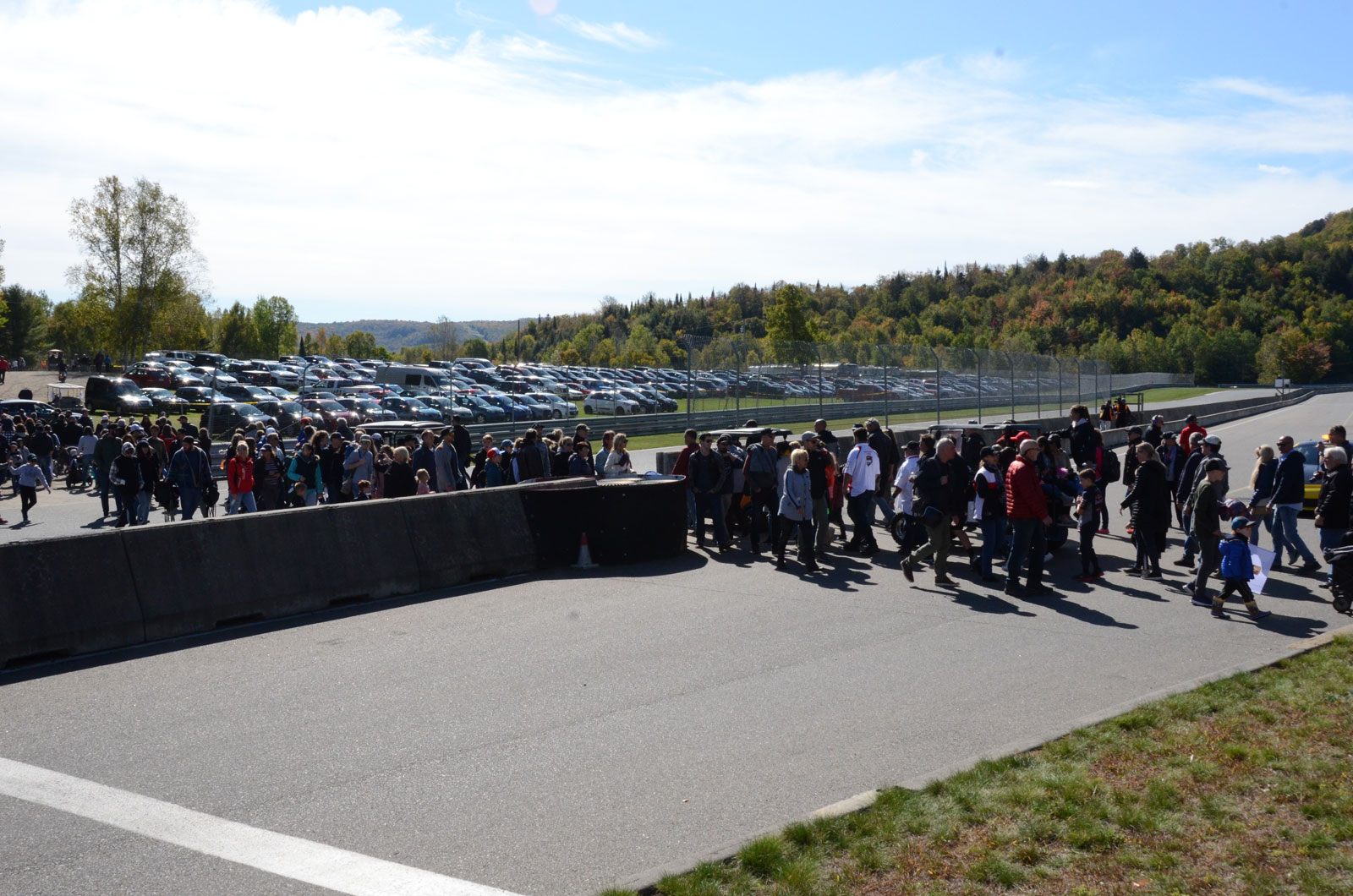 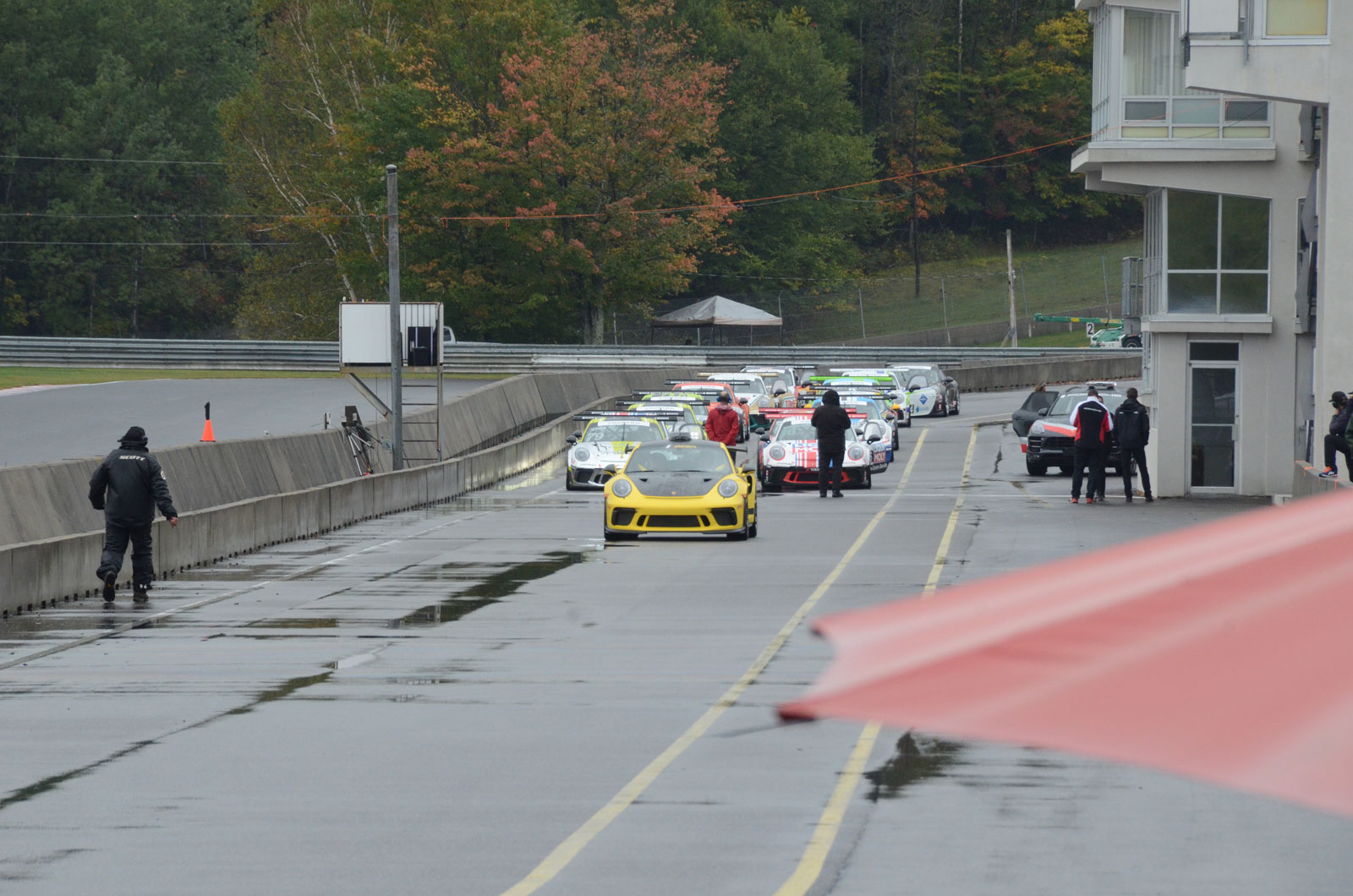 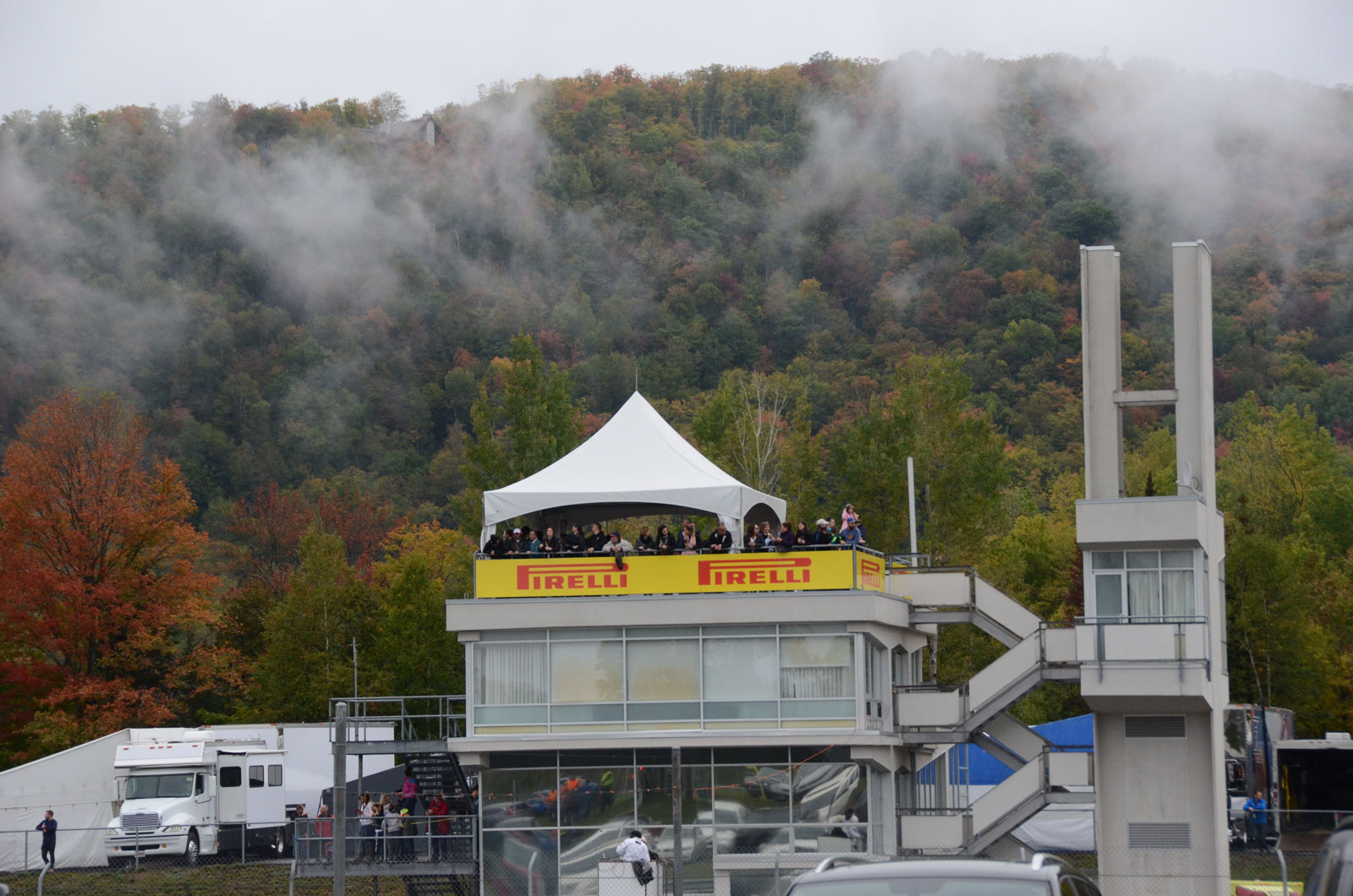