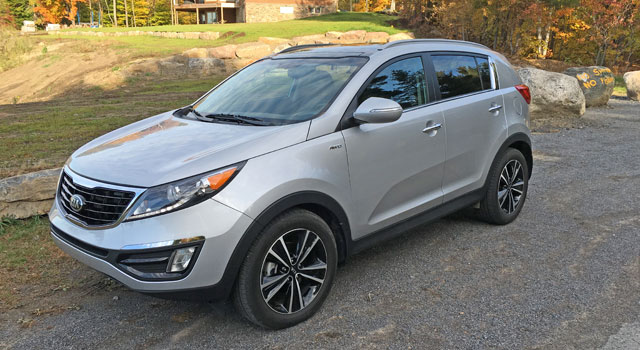 This is the third generation of Sportage  Kia has marketed, having been released for the 2011 model year here in Canada.  It was a noticeable improvement over the 2005-2010 model and the design really gives the vehicle a big beefy look which is what people want in an SUV (even a small SUV). You’d be forgiven if you mistook this for the full size Kia Sorrento as many of my family members did.

The compact SUV is a segment that has gained a lot in popularity over the past decade. It’s perfect for a family who doesn’t want to break the budget but wants a little more utility then a small sedan can provide.

The Sportage starts at $24,810 for the base LX trim and tops out at $40,110 for the SX Luxury model. Front-wheel drive comes standard and to get the coveted all-wheel drive for our nasty winters you’re looking at $29,310 for the LX AT AWD trim.

My tester was the fully-loaded SX model with all the bells and whistles you’d expect. Under the hood sits a 2.0L, turbocharged GDI 4-cylinder engine making 260 horsepower and 269 lb-ft of torque matted to a 6-speed automatic transmission. It’s more than enough to power this truck and even then some.

As I mentioned, Kia really did wonders when they redesigned the Sportage. The exterior is gorgeous and complimenting it are they 18-inch machine-finished sport alloys wheels with black trim. LED daytime running lights and tail lights are also a nice addition. I’m a big lightning guy and there are even some luxury manufacturers who will remain nameless that inexplicably neglect these types of details.

The interior is spacious and functional with ample space for my baby seat and booster in the back seat. Controls are well laid out and I was able to learn the Sportage’s infotainment system in no time using the LCD touch-screen. The SX has a push-button start, backup camera, keyless operation, Bluetooth, steering mounted controls, heated front and rear seats and just about every other option you could find on any luxury vehicle.

Kia goes the extra mile with standard features and in addition to ABS, stability and traction control there is standard hill hold assist and downhill descent control.

The Sportage is a good little SUV that will serve any family well. Is there anything I didn’t like about it? Nothing that really stands out, no. The vehicle had 17,000 kilometers on it and there was no new car smell left to speak of but I suppose that’s to be expected unless we’re talking about an expensive luxury vehicle. Build quality is on par with any of the Japanese brands.

The Sportage remains the same for 2016 but Kia is planning a major revamp for 2017.

2016 Honda Civic May Get Type R Engine or More!